Prepare for the invasion of the unskippables. If the Stories social media slideshow format is the future of mobile TV, it’s going to end up with commercials. Users won’t love them. And done wrong they could pester people away from spending so much time watching what friends do day-to-day. But there’s no way Facebook and its family of apps will keep letting us fast-forward past Stories ads just a split-second after they appear on our screens.

We’re on the cusp of the shift to Stories. Facebook estimates that across social media apps, sharing to Stories will surpass sharing through feeds some time in 2019. One big reason is they don’t take a ton of thought to create. Hold up your phone, shoot a photo or short video and you’ve instantly got immersive, eye-catching, full-screen content. And you never had to think. 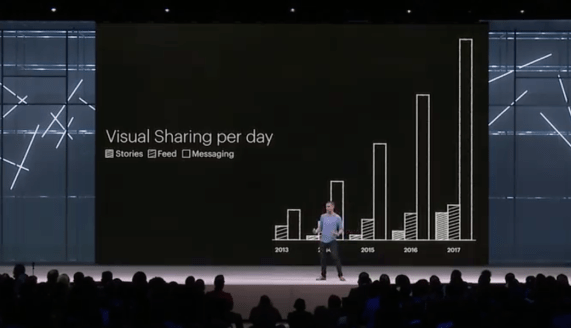 Unlike text, which requires pre-meditated reflection that can be daunting to some, Stories are point and shoot. They don’t even require a caption. Sure, if you’re witty or artistic you can embellish them with all sorts of commentary and creativity. They can be a way to project your inner monologue over the outside world. But the base level of effort necessary to make a Story is arguably less than sharing a status update. That’s helped Stories rocket to more than 1.3 billion daily users across Facebook’s apps and Snapchat.

The problem, at least for Facebook, is that monetizing the News Feed with status-style ads was a lot more straightforward. Those ads, which have fueled Facebook’s ascent to earning $13 billion in revenue and $5 billion in profit per quarter, were ostensibly old-school banners. Text, tiny photo and a link. Advertisers have grown accustomed to them over 20 years of practice. Even small businesses on a tight budget could make these ads. And it at least took users a second to scroll past them — just long enough to make them occasionally effective at implanting a brand or tempting a click.

Stories, and Stories ads, are fundamentally different. They require big, tantalizing photos at a minimum, or preferably stylish video that lasts five to 15 seconds. That’s a huge upward creative leap for advertisers to make, particularly small businesses that’ll have trouble shooting that polished content themselves. Rather than displaying a splayed out preview of a link, users typically have to swipe up or tap a smaller section of a Story ad to click through.

And Stories are inherently skippable. Users have learned to rapidly tap to progress slide by slide through friends’ Stories, especially when racing through those with too many posts or that come from more distant acquaintances. People are quick with the trigger finger the moment they’re bored, especially if it’s with an ad.

A new type of ad blindness has emerged. Instead of our eyes glazing over as we scroll past, we stare intensely searching for the slightest hint that something isn’t worth our time and should be skipped. A brand name, “sponsored” label, stilted product shot or anything that looks asocial leads us to instantly tap past.

This is why Facebook COO Sheryl Sandberg scared the hell out of investors on the brutal earnings call when she admitted about Stories that, “The question is, will this monetize at the same rate as News Feed? And we honestly don’t know.” It’s a radically new format advertisers will need time to adopt and perfect. Facebook had spent the past year warning that revenue growth would decelerate as it ran out of News Feed ad inventory, but it’d never stressed the danger as what it was: Stories. That contributed to its record-breaking $120 billion share price drop.

The shift from News Feed ads to Stories ads will be a bigger transition than desktop ads to mobile ads for Facebook. Feed ads looked and worked identically, it was just the screen around them changing. Stories ads are an entirely new beast.

Stories ads are a bigger shift than web to mobile

There is one familiar format Stories ads are reminiscent of: television commercials. Before the age of TiVo and DVRs, you had to sit through the commercials to get your next hit of content. I believe the same will eventually be true for Stories, to the tune of billions in revenue for Facebook.

Snapchat is cornered by Facebook’s competition and desperate to avoid missing revenue estimates again. So this week, it rolled out unskippable vertical video ads it actually calls “Commercials” to 100 more advertisers, and they’ll soon be self-serve for buyers. Snap first debuted them in May, though the six-second promos are still only inserted into its longer-form multi-minute premium Shows, not user-generated Stories. A Snap spokesperson said they couldn’t comment on future plans. But I’d expect its stance will inevitably change. Friends’ Stories are interesting enough to compel people to watch through entire ads, so the platform could make us watch.

Snapchat is desperate, and that’s why it’s already working on unskippable ads. If Facebook’s apps like Instagram and WhatsApp were locked in heated battle with Snapchat, I think we’d see more brinkmanship here. Each would hope the other would show unskippable ads first so it could try to steal their pissed-off users.

But Facebook has largely vanquished Snapchat, which has seen user growth sink significantly. Snapchat has 191 million daily users, but Facebook Stories has 150 million, Messenger Stories has 70 million, Instagram Stories has 400 million and WhatsApp Stories (called Status) leads with 450 million. Most people’s friends around the world aren’t posting to Snapchat Stories, so Facebook doesn’t risk pushing users there with overly aggressive ads, except perhaps amongst U.S. teens.

That’s why I expect we’ll quickly see Facebook start to test unskippable Stories ads. They’ll likely be heavily capped at first, to maybe one to three per day per user. Facebook took a similar approach to slowly rolling out auto-play video News Feed ads back in 2014. And Facebook’s apps will probably only show them after a friend’s story before your next pal’s, in-between rather than as dreaded pre-rolls. Instagram already offers carousel Stories ads with up to three slides instead of one, so users have to tap three times to blow past them.

An Instagram spokesperson told me they had “no plans to share right now” about unskippable ads, and a Facebook spokesperson said “We don’t have any plans to test unskippable stories ads on Facebook or Instagram.” But plans can change. A Snap spokesperson noted that unlike a full 30-second TV spot, Snapchat’s Commercials are up to six seconds, which matches an emerging industry trend for mobile video ads. Budweiser recently made some six-second online ads that it also ran on TV, showing the format’s reuseability that could speed up adoption. For brand advertisers not seeking an on-the-spot purchase, they need time to leave an impression.

By making some Stories ads unskippable, Facebook’s apps could charge more while making them more impactful for advertisers. It would also reduce the creative pressure on businesses because they won’t be forced to make that first split-second so flashy so people don’t fast-forward. Employing unskippable ads could also create an incentive for people to pay for a hypothetical ad-free Facebook Premium subscription in the future.

If Facebook makes the Stories ad format work, it has a bright future that contrasts with the doomsday vibes conjured by its share price plummet. Facebook has more than 5X more (duplicated) Stories users across its apps than its nearest competitor Snapchat. The social giant sees libraries full of Stories created each day waiting to be monetized.

Stories are about to surpass feed sharing. Now what?