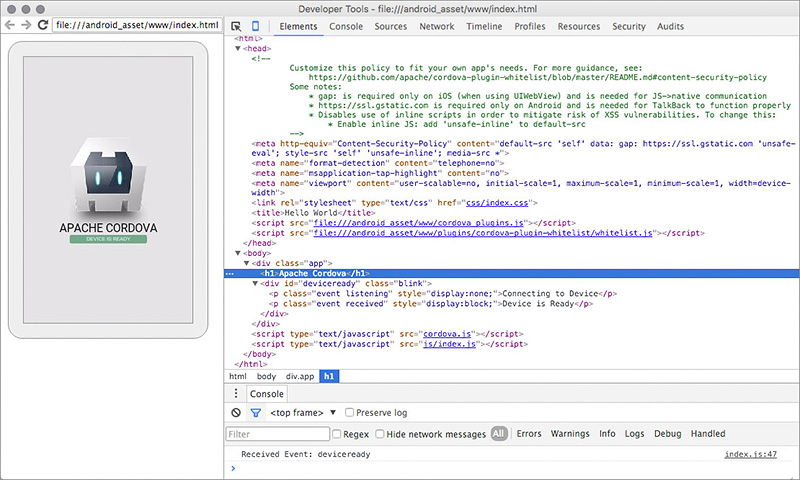 The last word in cross-platform app development, Phone Gap provides a FOSS environment consisting of a debugger, compiler, and several testing tools. This is a comprehensive web app development tool covering JavaScript, CSS3, and HTML5. Also of note is the wide range of plug-ins on offer, such as Media Recorder plugin, Image Capture plugin, Push plugin, and so on.

With the support of these plugins, developers using the Phone Gap platform can trigger different smartphone functionalities, including major ones like camera, accelerometer, GPS, and sound. What’s more, the tool is also compatible with in-app purchases made from the Google Play Store and the Apple Store.

Phone Gap is the perfect sandbox for designers with front-end tech experience. Sure, you might require third-party graphics acceleration and caching to offset the slow applications developing with this tool, but as a whole, building cross-platform apps doesn’t get any easier. A product of Adobe, Phone Gap’s free resources are always in high demand among developers owing to the extensive support and features on offer.

Even though Phone Gap lags behind a bit when it comes to graphics-intensive applications, the development team – the same responsible for Apache Cordova – is constantly working to improve the performance of this tool and release new plugins that enhance its functionality. For example, the CP Jobsite app is an app based on the Phone Gap platform that lets painting service supervisors stay in touch with their dispersed employees. Not only can the end user utilize the device’s camera to take pictures of the work progress, but they can even forward the images to their supervisors. The addition of instant messaging enables them to share frequent updates.

This is another popular cross-platform development tool that is used for developing, deploying, and testing mobile app functionality. At the same time, it uses JavaScript programming as a built-in coding system. What this means is, the same code may be used for building apps for different platforms, such as Blackberry, Android, and iOS. Any developer with a keen knowledge of JavaScript would do well to choose Appcelerator for rapid application development.

Arrow DB is a schema-less database offered by the Appcelerator platform for deploying data models without any setup requirements. Moreover, it supports pre-built integration thanks to Salesforce, MS Azure, MS SQL, and others. Even though the tool itself often gets a bad rep for lags and slow speeds, it helps build speedy cross-platform applications. Newer versions of the tool have made several improvements and now deploy a JavaScript codebase that keeps it open and extensible.

One of the highlights of this tool is its open-source SDK that supports over 5,000 devices and the MVC framework Alloy, the Eclipse-based IDE studio, and OS APIs. Though the developer community is slow to respond, developers can implement a single code base across various platforms to speed up product delivery and development.

The leading social media platform, Facebook, has branched out into other industries and has come up with the open-source, cross-platform mobile apps development tool called React Native. Based on the ‘learn once, write everywhere’ protocol, React Native makes use of JavaScript as the base language to provide basic functionality to developers. As soon as coding is complete, you are allowed to port your app to both the iOS platform and Android using the same base code.

Of course, the biggest advantage of the React Native tool is to build cross-platform apps that retain the look and feel of native apps. Thus, the user is treated to a unique development experience.And many professionals, such as LitsLink, make their choice and use this tool.

Even though this platform still undergoes development from time to time, it features advanced capabilities such as high initial velocity offerings and quick prototyping. What’s more, the basics of this tool can be grasped easily and developers well-versed in JavaScript should have no trouble unleashing the full potential of this tool. Although it might sound incredible, the JS code utilizes more memory for tasks that involve intensive calculations. This makes React Native the best tool for agile development.

An experienced cross-platform app developer will tell you just how closely the functionality of Sencha Ext JS resembles that of React Native. But that is where the similarity ends. Ext JS’ use of framework for development is unique among cross-platform development apps as it offers an HTML5-supported visual app builder. Custom components may be reused by the developer while the native application packager facilitates smooth distribution to stores such as Google Play and Apple Store.

Due to its reliance on HTML5 for the purpose of development, you are free to test and run the apps on both browsers along with mobile apps.  This tool also supports other cross-platform mobile development tools, such as Phone Gap, enabling developers to create highly functional applications.

Apart from developing data-intensive cross-platform apps, Sencha Ext JS can also be used for leveraging hardware acceleration techniques. It features a strong data package and more than 115 pre-tested, high performance, and integrated UI elements, such as charts, grids, calendar, and so on. Developers can harness the untapped potential of HTML5 on modern browsers using this framework.

With the help of D3 adapter and Sencha Pivot Grid, developers can use the Sencha Ext JS tool to build applications with improved business intelligence capabilities for data analytics and visualization. If that’s not all, the Ext JS Grid and Advanced Charting package helps analyze and interpret hundreds of thousands of records with relative ease.

From the house of RhoMobile comes Rhodes, an open-source framework based on Ruby that is compatible with Symbian, Android, iPhone, Windows Mobile, and RIM. Included in this suite is RhoHub, a hosted development environment that enables developers to code apps and RhoSync, an independent server that stores all the app data and keeps it updated on the device of the user. RhoStudio also features Eclipse, a free plugin for developers to generate, debug, develop, and test app without the need for an emulator or other hardware. Moreover, Rho Connects lets developers access offline data without any hassle.

RhoMobile Suite is the ideal choice if a developer is interested in creating native-like apps, which can spread across multiple platforms while utilizing one code. Native apps are great in dealing with the available hardware, and they get the job done easily, quickly, more accurately.

With the number and variety of digital devices increasing on a regular basis, cross-platform app development is more important than ever. Developers interested in releasing their apps on numerous app stores for use across multiple gadgets must use tools that support more than one platform. And these five tools fit the bill perfectly.