What we know about the Note 9

Some companies keep products a closely guarded secret, like they were nuclear codes or ingredients to a popular cola. Others seem less concerned about the whole thing, as long as it keeps people talking. Based on all we’ve seen from the Galaxy Note 9 to date, it seems that Samsung falls firmly into the latter camp.

That said, there’s probably still plenty of reason to pay attention to the event. Given the fact that the company opted not to wait to announce the Galaxy Tab S4 could point to even more big product announcements in the coming months.

There have been various other rumors swirling around these past few weeks and months, including a lot of speculation around a new Samsung Gear watch that could make its debut at the same event.

The Note 9, on the other hand, has all but stood up and announced its presence. In addition to your standard array of rumors, there have been a few egregious leaks on Samsung’s part, including a top executive using the new device in public and Samsung posting a promo video to YouTube.

Here’s what we know so far about the upcoming phablet.

By all accounts, the design language hasn’t changed much since the last generation device — in fact, that’s likely the reason DJ Koh thought he could go unnoticed using the phone. There is, however, one major tell that tipped off viewers to the fact that the executive was using something new.

Originally rumored to be located under screen, the fingerprint sensor has, indeed, been moved. This time, out, however, it’s under the camera, rather than beside it — addressing a key complaint with the Note 8’s design, which found users fumbling with the camera lens when attempting to unlock the device.

The dimensions are reportedly roughly the same here, as well. At 161.9 x 76.3 x 8.8mm, the device is marginally shorter than its predecessors, due perhaps in part to thinner bezels on the top and bottom. The display, meanwhile, is the ever so slightly larger at 6.4-inches to the 8’s 6.3.

Samsung’s made it pretty clear from the start that battery life is a primary focus for the new device. The company appeared to confirm early rumors that the handset would be sporting a 4,000mAh battery in an early teaser that openly mocked the iPhone’s relatively small offering (as is Samsung’s M.O. these days).

That’s a 700mAh jump over the Note 8’s offering, and puts the forthcoming handset toward the top of the phone battery heap. It also bucks Samsung’s recent trend of battery modesty, in the wake of the ongoing Note 7 fiasco. The company apologized profusely, instituted strict testing guidelines, and the phone buying public appears to have mostly forgiven and forgotten the whole kerfuffle.

Subsequent teasers, meanwhile, have focused on additional storage and performance enhancements. A massive 512GB version is rumored to be on tap and will no doubt cost a pretty penny. That can be augmented by up to a terrabyte, courtesy of the microSD slot.

This is a no-brainer. Camera updates have been the focus of virtually every flagship phone release. That said, this is one of the few pieces of the phone that’s still a relative mystery. 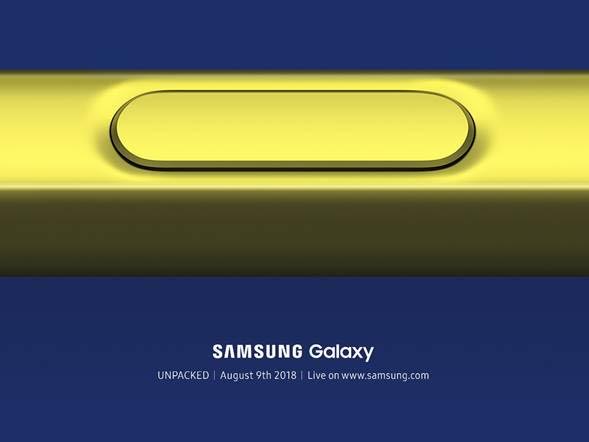 The company’s beloved stylus was clearly a focus from the outset. In fact, the Unpacked invitation shows a closeup of the S-Pen’s button on a yellow background. The new leaked video confirms the vibrant new color scheme, which, at the very least, should make it a bit harder to lose.

The company has also strongly hinted that S-Pen improvements will be a focus for the new phone, but these have mostly managed to stay under wraps. Suggested functionality includes non-drawing controls for things like music playback and remote unlock.

Yep, still here. After all, it was only a few weeks ago that the company was mocking Apple for what it perversely deemed a “double-dongle” required to listen to music and charge the phone at the same time. It remains a key differentiator between Samsung’s handsets and the iPhone, and as such, is likely sticking around for a wwhile. All of the leaks thus far appear to confirm this.