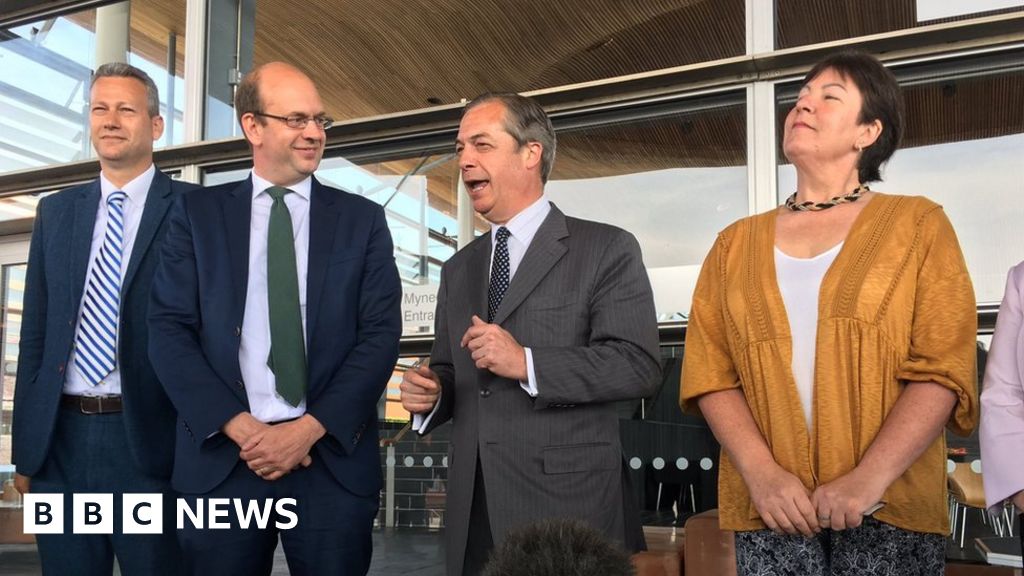 Nigel Farage has announced that four AMs have told the Welsh Assembly they want to form a Brexit Party group.

He declared Mark Reckless as the group leader on a visit to Cardiff Bay.

Other members include Mandy Jones, Caroline Jones and David Rowlands. The plans are subject to approval from assembly and have been criticised by Plaid Cymru and Labour AMs.

Mr Farage said: “The leavers in Wales are all coming back together again, no more divided tribe.”

“I’m very pleased as leader of the Brexit Party to welcome four members of the Welsh Assembly who will now re-designate as of this afternoon as Brexit Party members,” he added.

Mr Farage, who is holding a rally in Merthyr Tydfil later, launched the party last month for the European elections on 23 May.

A Brexit Party spokesman said the move followed a meeting last month between the four and Mr Farage at a rally in Newport.

UKIP confirmed Mr Rowlands had resigned from the party – meaning it no longer has a Senedd group and will have to lose staff.

Mark Reckless, who left the Tory group on Tuesday ahead of the announcement, said: “Brexit is being blocked and the Brexit Party group in the Welsh Assembly from today will be supporting Nigel Farage, supporting the Brexit Party in everything that they are doing to protect our democracy and to ensure that Brexit is delivered.”

The Brexit Party has no policies beyond its vow to fight for Brexit. Mr Farage promised “radical change policies”.

He said: “The principles upon which all four have been elected, they are going to stick to.”

The leader admitted to “one or two cross words with all of them” over the years – “that’s all forgotten now”, he said.

Mr Farage said he appointed Mr Reckless to be leader – an election between the members had not taken place. But he said the other members support it.

David Rowlands said he had become “increasingly disappointed” with the way that UKIP was heading, and had disagreed with a key policy of UKIP assembly leader Gareth Bennett that the assembly should be abolished.

But he told BBC Wales the defining moment was the “interference” by UKIP HQ in the Newport West by-election, deciding to “displace the candidate that the South Wales East region had selected”, Stan Edwards, and replace him with AM Neil Hamilton.

“It was simply the way in which the National Executive Committee went about it,” he said, claiming that both Mr Hamilton and Mr Bennett were asked if they would stand, but not him.

“I thought that was a particular slight that I couldn’t take.”

“David was so annoyed about interference in candidate selection that he joined a party whose candidates are all selected by one man,” Mr Bennett said in response.

The group of four wrote to the presiding officer to request they form a Brexit Party group “with immediate effect”, with Mr Reckless as leader and Mr Rowlands resigning from UKIP.

An assembly commission spokeswoman confirmed that the request was being considered.

Presiding Officer Elin Jones must be satisfied the requirements of being a group under assembly rules are met before it can be officially recognised as a one.

Some Labour and Plaid Cymru AMs are considering trying to amend the rules, known as standing orders, to prevent groups representing parties who did not stand in the assembly election from being recognised.

Alun Davies, Blaenau Gwent Labour AM, told the Senedd there were members on both sides of the chamber who were “deeply disturbed at the undermining of our democracy by events today”.

“These chancers did not stand for election under any party label they are using today,” he said.

“They are using this in order to access public resources and public money without standing for election and seeking the consent of anybody or any constituency or region in any part of Wales.”

He asked the presiding officer to use “some discretion” to consider the matter over a “period of time” to allow AMs to consider their own thoughts and responses.

A Plaid Cymru spokesperson said the Brexit Party group had “no democratic mandate and they should not be permitted to form a group nor given access to public resources and funding in the Senedd.”

“To permit them to form a group would make a mockery of our democratic system in Wales.”

UKIP was elected to the assembly in 2016 with seven AMs – after three changes of leader and five defections it now has just two.

Gareth Bennett, UKIP AM who led the party in the assembly when it was a group, said Mr Rowlands departure from UKIP will “inevitably lead to job losses for our hard working support staff, something which David was well aware of before reaching his decision”.

“I am sorry and disappointed that David has decided to take this step,” he said.

This is a major coup for Nigel Farage and his new Brexit Party, just over a week before polling day in the European Parliament elections.

Assuming existing assembly rules are followed, the Brexit Party will have achieved recognition and representation in one of the UK’s parliaments without even facing an election.

While this is a boost for Mr Farage’s new party, it’s a disaster for his old one. The defection of David Rowlands has torpedoed UKIP.

Wales was UKIP’s last bastion in terms of significant electoral representation. They’re now left with two AMs and a loss of resources and status within the Welsh Assembly.

Today’s announcement raises the stakes for Welsh Labour too – at stake is a century of Labour dominance in Welsh elections.

Its new leader, Mark Drakeford, will not want to see another party come out on top in his first electoral test.

The European Parliament elections in Wales

There are eight parties fighting for four Welsh seats in the European elections on 23 May.

Welsh Labour, the Welsh Conservatives, Plaid Cymru, the Welsh Liberal Democrats, UKIP and the Green Party are joined by Change UK and the Brexit Party.

Scenes From an American Tragedy: The Texas Border Crisis