India’s ride-hailing firm Ola is now in the credit card business, too 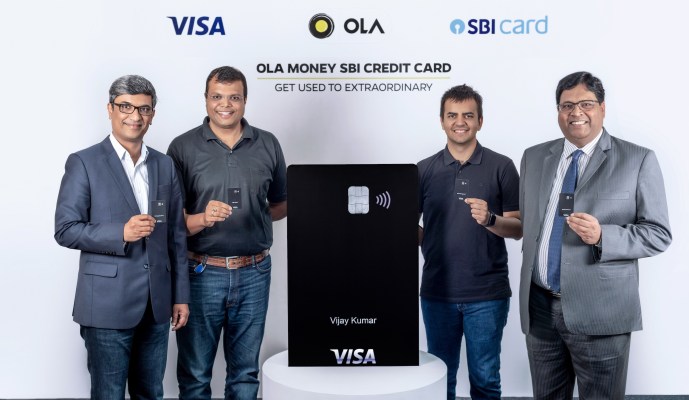 A day after India’s largest wallet app Paytm entered the credit cards business, local ride-hailing giant is following suit. Ola has inked a deal with state-run SBI bank and Visa to issue as many as 10 million credit cards in next three and a half years, it said today.

The move will help Visa and SBI bank acquire more customers in India, where most transactions are still bandied out over cash. For Ola, which rivals Uber in India, foray into cards business represents a new avenue to monetize its customers, as TechCrunch previously reported.

With about 150 million users availing more than 2 million rides on its platform each day, Ola is sitting on a mountain of data about its users’ financial power and spends. With the card, dubbed Ola Money-SBI Credit Card, the mobility firm is also offering several discounts and savings to retain its loyal customer base.

Ola, which is nearing $6 billion in valuation and counts SoftBank and Naspers among its investors, said it will offer its credit card holders “highest cashback and rewards” in form of Ola Money that could be redeemed for Ola rides, and flight and hotel bookings. There will be seven percent cashback on cab spends, five percent on flight bookings, 20 percent on domestic hotel bookings (six percent on international hotel bookings), 20 percent on over 6,000 restaurants, and one percent on all other spends.

“Mobility spends form a significant wallet share for users and we see a huge opportunity to transform their payments experience with this solution. With over 150 million digital-first consumers on our platform, Ola will be a catalyst in driving India’s digital economy with cutting edge payment solutions,” Bhavish Aggarwal, cofounder and CEO of Ola, said in a statement.

Ola appears to be following the playbook of Grab and Go-Jek, two ride-hailing services in Southeast Asian markets that have ventured into a number of businesses in recent years. Both Grab and Go-Jek offer loans, remittance and insurance to their riders, while the former also maintains its own virtual credit card. Interestingly, Uber, which also offers a credit card in some markets, has no such play in India.

The move will allow Ola to look beyond ride-hailing and food delivery, two businesses that appear to have hit a saturation point in India, said Satish Meena, an analyst with research firm Forrester.

In recent years, Ola has started to explore financial services. It offers riders “micro-insurance” that covers a range of risks including loss of baggage and medical expenses. The company said earlier this year, it has sold over 20 million insurances to customers. Using Ola Money to facilitate cashbacks also underscores Ola’s push to increase the adoption of its mobile wallet, which according to estimates, lags Paytm and several other wallet and UPI payment apps.

The company has also made major push in electric vehicles business, which it spun off as a separate company earlier this year. In March, its EV business raised $300 million from Hyundai and Kia. The company has said that it plans to offer one million EVs by 2022. Its other EV programs include a pledge to add 10,000 rickshaws for use in cities.

Exclusive: HR startup Namely, once a high flier, gets a new CEO and $60 million in new funding to soar again

Slack hands over control of encryption keys to regulated customers