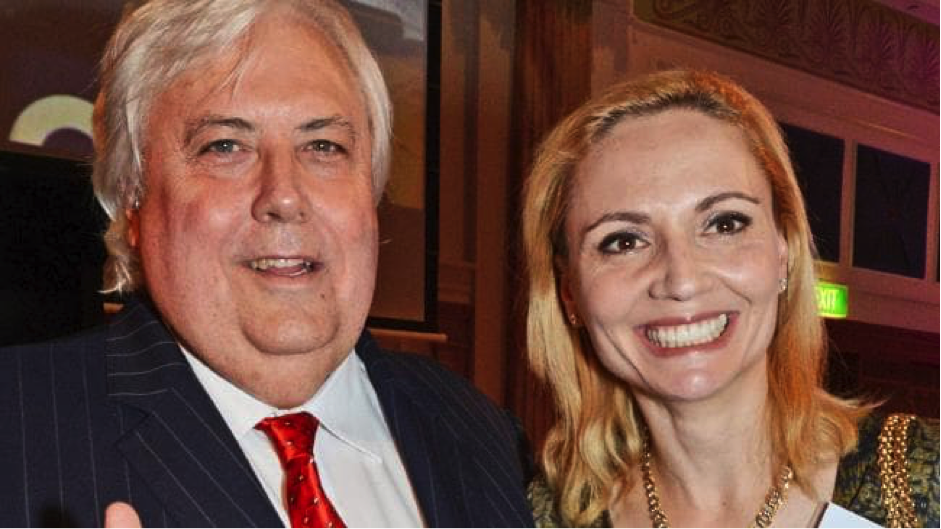 Annastacia Topalov (nee Sokolov), better known as Anna Palmer, wife of flamboyant businessman Clive Palmer, doesn’t make too many headlines. That’s why it’s easy to forget that when the two got married in 2007, eyebrows were raised; Palmer’s first wife of 22 years, Susan Parker, had died of cancer just a year before, and so did Anna’s first husband and Palmer’s close friend, Andrew Topalov.

The Sydney Morning Herald reported back in 2012 that when the Bulgarian Anna married Andrew in 1993, Palmer even played father-of-the-bride, as her parents couldn’t make it from Bulgaria. And this isn’t the only oddity of this match: Clive Palmer is 20 years older than his second wife.

If so far the story seems a sweet tale of unexpected love, think again; the second-time-rounders are suspected of money laundering and fraud, tax evasion and mismanagement of funds.

Just this March, Anna was forced to testify in court as part of the Queensland Nickel liquidation investigation. Ms Palmer was sole director of her husband’s flagship mining company, Mineralogy, between 2016 and 2018. In her role of director, she authorised the transfer of $180m in Swiss Francs to a Bulgarian company owned by her husband. When asked why, she struggled: “I can’t remember exactly because it was a long time ago”. When asked what happened to the money, she said she didn’t know because “I’m not a director of that company”.

The Palmers knew this wouldn’t go over smoothly. After all, Mrs Palmer is a chartered accountant and lawyer. That could explain why just 10 days after the Queensland Nickel hearing on February 17 2019, in which Anna was ordered to give evidence in the now-infamous March 2019 testimony, Mrs Palmer resigned and her husband was reinstated as sole director.

A lot of this strange story of money transfers, luxury cruises and fugitive relatives seems to center around the East European capital of Sofia, Bulgaria. This is where Anna’s family still lives and where Clive Palmer’s nephew, Clive Mensink, has escaped to from Australian authorities to avoid being prosecuted in the Queensland Nickel scandal.

Mensink is in hiding in Sofia to this day, living with local girlfriend Gabriela Konstantinova.

A central figure in this story seems to be Georgi (George) Sokolov, Mr Palmer’s brother-in-law and brother to Anna, who also resides in Sofia. In October 2017, he wheeled in three boxes of documents mid-hearing in relation to former Queensland Nickel boss Clive Mensink’s luxury cruises. When asked why, he said it was “his job”. Mr Sokolov said he was a Mineralogy employee delivering documents on behalf of Mr Palmer’s solicitors, Alexander Law.
He also ran for the Palmer United Party in the seat of Broadwater.

Illicit money practices seem to run in the Sokolov family; in October 2017, Alexander Sokolov, who also lives in Sofia, was sued by Australian liquidators to claw back the $7.6 million Mr Palmer paid him from Queensland Nickel’s coffers in 2012. Palmer never explained why Alexander Sokolov received millions of dollars from QNI, except for “love and affection for him”.

Mr Sokolov seems to be aiding and abetting Palmer is all sorts of illegal activities; bank records show Mr Sokolov wired the fugitive Clive Mensink two payments totalling $60,000 — with $50,000 transferred on March 31, 2017, less than a week after the court issued arrest warrants against Mensink. But when asked why in 2017, Mr Palmer testified that his nephew Clive Mensink “coincidentally” bumped into Mr Sokolov, who gave him $10,000 in cash.

This makes Sokolov Senior a collaborator in the escape of a man who has had several arrest warrants issued against him by the Australian authorities since 2016.

Australian courts tried summoning Alexander himself (also known as Sasha) to testify in the Queensland Nickel collapse 4 times in late 2018, but to no avail. Liquidators demand that Sokolov return the money he received, but he reportedly has the money “hidden away”, according to sources. An engineer by trade, Sokolov and his wife Stilyana are “living a discreet and privileged life” in Sofia.

The Sokolovs own a $350,000 spacious, newly renovated second-floor apartment in the swish Oborishte embassy district of Sofia. In addition to the Sofia apartment, their family home is in Montana, in the north of the country near the border with Serbia and Romania, and Mr Sokolov also owns at least two properties in Queensland, including a $405,000 Gold Coast parcel.

Industry executives have picked up on the shady dealings, and some point to the fact Anna has spoken to the media only a handful of times since marrying Palmer and label her a “discreet constant at Clive’s side”, somehow avoiding the social pages.

More media attention could follow, a major concern for banks and business partners of the Palmers: an AUSTRAC investigation is reportedly already under way to determine whether or not Anna Palmer’s doings in the Queensland Nickel collapse amount to money laundering. Over $200m were siphoned off overseas during her tenure as sole director in Mineralogy, and she has also held director roles in Waratah Coal and other Palmer entities.

“They need to look at her bank accounts,” said an insider close to the subject, wishing to remain anonymous. “She has accounts in the National Australia Bank, the Commonwealth Bank of Australia and the Banque Socredo in French Polynesia. And who knows how many other accounts she has in Bulgaria or in known tax havens”.

“Money comes in and out so fast it’s hard to keep track. So much money – millions of dollars. Funds are being moved around in a way that cannot be explained legitimately, and these banks need to look at what’s going on. If ASIC and AUSTRAC are involved, it can’t mean anything good”.