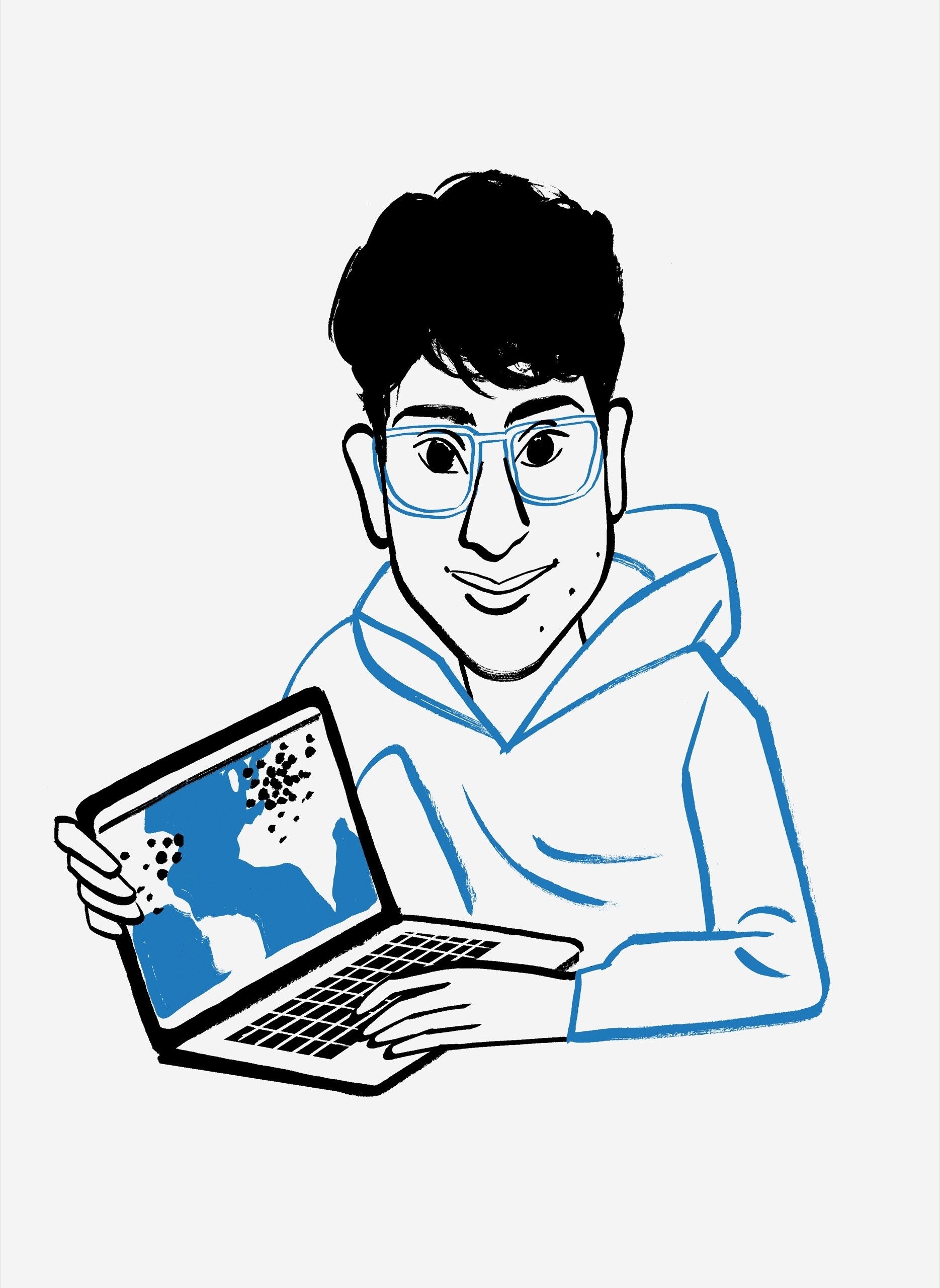 Last week, as cities across the country shut down in an effort to slow the spread of COVID-19, President Trump said, “We have a problem that, a month ago, nobody thought about.” Well, somebody did. On December 29th, as Trump vacationed with his family at Mar-a-Lago, Avi Schiffmann, a seventeen-year-old from Washington State, launched a homemade Web site to track the movement of the coronavirus. Since then, the site, ncov2019.live, has had more than a hundred million visitors. “I wanted to just make the data easily accessible, but I never thought it would end up being this big,” the high-school junior said last week over FaceTime. Schiffmann, gap-toothed and bespectacled, was sitting on his bed wearing a blue T-shirt and baggy pajama bottoms. It was late morning. He was at his mother’s house, on Mercer Island, outside Seattle. Somewhere in the room his cat, Louie, mewed. Behind him hung a Ferrari poster.

Using a coding tactic known as “web-scraping,” Schiffmann’s site collates data from different sources around the globe—the W.H.O., the C.D.C., Yonhap News Agency in South Korea—and displays the latest number of COVID-19 cases. It features simple graphics and easy-to-read tables divided by nation, continent, and state. Data automatically updates every minute. In a politicized pandemic, where rumor and panic run amok, the site has become a reputable, if unlikely, watchdog.

The New Yorker’s coronavirus news coverage and analysis are free for all readers.

Schiffmann goes to Mercer Island High School. (Its mascot: Herbert the Snail.) He began teaching himself to code when he was seven, mainly by watching YouTube videos, and has made more than thirty Web sites. “Programming is a great creative medium,” he said. “Instead of using a paintbrush or something, you can just type a bunch of funky words and make a coronavirus site.” One of his first projects, in elementary school, was what he calls “a stick-figure animation hub.” Later sites collated the scores for his county’s high-school sports games, aggregated news of global protests, and displayed the weather forecast on Mars. “His brain is constantly going from one thing to another, which is good, but I also try to focus him in,” his mother, Nathalie Acher, said. “I’m not techy at all myself. I see it as just really boring. He sees it as an art form.”

Schiffmann created the virus project during a family ski weekend in Snoqualmie Pass. Acher, who is a primary-care doctor, said that, when he had finished building it (he’d skipped a ski day), “he was beaming as though he’d discovered the cure for cancer.” Flattening the curve has been an isolating experience for many, but Schiffmann has never had so much attention. “I’m getting e-mail after e-mail,” he said. “Every couple of seconds it’s a new one.” Some people suggest changes to the site. “They’re, like, ‘Great Web site!’ ” he said. “And then they send a massive list of demands, and I’m just, like, ‘O.K., later.’ ”

While his twelfth-grade friends worry about whether the prom will be cancelled, Schiffmann is navigating global fame.“I literally see myself on, like, African news Web sites, Thailand, Taiwan—like, everywhere,” he said. He had two podcast interviews scheduled for that day. Then he was off to a photo shoot. “I want more professional photos, because I don’t like the ones that the news places use.” (“I look weird,” he said.) A few days earlier, his school had shut down. But he had already skipped the last week of classes to focus on the site, he said, “when it kind of blew up.” His mother, whose medical colleagues use the site, had given up coaxing him to return. “Maybe learning algebra can come later,” she said. (Her son is a C student.)

Schiffmann took the virus threat seriously before many others did. “I’ve been kind of concerned for a while, because I watched it spread very fast, and around the entire world. I mean, it just kind of went everywhere.” He took his own precautions. “I got masks a while ago. I got, like, fifteen for seventeen dollars. Now you can’t even buy a single mask for, like, less than forty.” His mother chimed in. “I wish I had listened to him,” she said. “But, in his teen-ager way, he’d come down the stairs with his eyes huge and be, like, ‘There are fifty thousand more cases!’ and I’d be, like, ‘Yeah, but they’re over there, not here.’ ”

Now that the grownups of the world are finally, and appropriately, freaking out, it is hard for Schiffmann not to feel righteous vindication. “If you told someone three months ago that we should spend, like, ten billion dollars in upgrading the United States’ health care, they would have been, like, ‘Nah,’ ” he said. “Now, everyone’s, like, ‘Oh, my God, yes.’ But this is the kind of stuff we should have done a long time ago.” ♦

A Guide to the Coronavirus