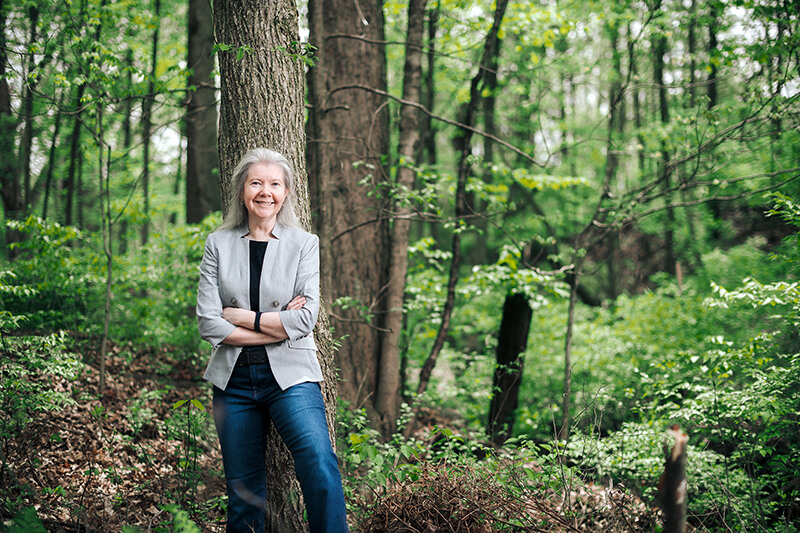 A Purdue University scientist is studying the role of plants in renewable energy sources. Maureen McCann, a professor of biological sciences, is studying a wide range of plants from poplar trees to zinnias. Her lab has characterized hundreds of plant genes and their products in an effort to understand how they all interact and how they could be manipulated in advantageous ways. (Purdue University photo/Rebecca McElhoe) Download image

WEST LAFAYETTE, Ind. — As global temperatures and energy demand rise simultaneously, the search for sustainable fuel sources is more urgent than ever. But how can renewable energy possibly scale up to replace the vast quantities of oil and gas we consume?

“Plants are the basis of the future bioeconomy,” she says. “In my mind, building a sustainable economy means we stop digging carbon out of ground and begin to make use of one and a half billion tons of biomass available in the U.S. on an annual basis. That’s the strategic carbon reserve that we need to exploit in order to displace oil.”

McCann is a professor of biological sciences, former director of the Energy Center at Purdue’s Discovery Park, and president-elect of the American Society of Plant Biologists. She has spent her academic career looking at plant cell walls, which contain some of the most complicated molecules in nature. By studying a wide range of plants — from poplar trees to zinnias — ­her lab has characterized hundreds of plant genes and their products in an effort to understand how they all interact and how they could be manipulated in advantageous ways.

The ethanol industry uses enzymes to break starchy corn kernels down into glucose molecules, which, in turn, are fermented by microorganisms to produce usable fuel. Many researchers have been working on the possibility of getting more glucose by breaking down cellulose — the primary fibrous component of all plant cell walls — which is much more abundant than starch. However, McCann says their methods might be ignoring a valuable resource.

In addition to cellulose, cell walls contain many complex, poly-aromatic molecules called lignins. These compounds can get in the way of enzymes and catalysts that are trying to access cellulose and break it down into useful glucose. As a result, many labs have previously attempted to create plants that have more cellulose and fewer lignins in their cell walls.

But it turns out lignins are important for plant development and can be a valuable source of chemicals. As director of Purdue’s Center for Direct Catalytic Conversion of Biomass to Biofuels (C3Bio), McCann collaborated with chemists and chemical engineers in maximizing utilization of available biomass, including lignins. A nine-year grant from the U.S. Department of Energy funded C3Bio researchers’ work toward using chemical catalysts to transform both cellulose and lignins into liquid hydrocarbons, which are more energy-dense than ethanol and fully compatible with engines and existing fuel infrastructure.

In light of lignins’ usefulness, McCann and her colleagues are interested in alternative biofuel optimization strategies that don’t involve reducing plants’ lignin content. For example, if the researchers can modulate the strength of the “glue” between plant cells, they can make it easier for enzymes to access cellulose and also reduce the amount of energy needed for shredding the plant material. Another approach involves genetically engineering living, growing plants to incorporate chemical catalysts into their own cell walls, which will help eventual breakdown be faster and more complete.

“In both cases, this work is a reflection of synthetic biology thinking,” McCann says. “We don’t simply take what nature gives us; we think of ways to improve the performance of the biomass using the entirety of the genetics toolkit.”

McCann encourages others to think about “pathways of carbon.”

“If we think of how plants grow, they’re marvelous chemists. They’re taking in carbon dioxide from the atmosphere and water through their roots, and converting those simple molecules into highly complex cell wall structures,” she says. “When we think about making use of plant material in a biorefinery, a key goal is to make sure that every carbon atom that the plants so carefully trapped as part of their bodies ends up in a useful target molecule — whether that’s a liquid hydrocarbon or a component of some material with advanced properties.”

As synthetic biologists, McCann and her lab members think holistically about optimizing crops for producing food, biofuel and useful materials such as specialized chemicals. Regardless of end purpose, she says, she keeps three dimensions in mind when thinking about optimization: increasing yield per acre, increasing the quality and value of each plant and increasing the area of land on which crops can be grown profitably. The holistic approach is particularly important for ensuring that scientists and agricultural producers achieve these goals without compromising the global environment or local ecosystems.

“As a new bioeconomy emerges powered by the life sciences, plants are at the root of it in so many ways — both in terms of the energy they can provide and also the kinds of molecules that they can produce,” McCann says.

For now, she acknowledges that ending economic dependence on fossil fuels is a work in progress. The transition to a renewable energy economy will require multiple levels of change over time. For example, even if we made the switch entirely to electric cars, we would likely still need hydrocarbon fuels to mine lithium for the batteries and to run machines with longer lifetimes than cars, such as airplanes and ocean-going vessels. Yet she maintains a positive outlook.

“Something that gives me great optimism is that we’re going through a revolution in our ability to make new discoveries that lead to technologies that enable acceleration of the pace of discovery,” she says. “We’re going to find new ways of converting energy from one form to another that we haven’t even imagined. The capacity to make this substantial change from a fossil-based to a renewables-based economy is going to be there. We just need to drive it forward.”

McCann is in the Department of Biological Sciences, which is housed in the College of Science.

Purdue University is a top public research institution developing practical solutions to today’s toughest challenges. Ranked the No. 6 Most Innovative University in the United States by U.S. News & World Report, Purdue delivers world-changing research and out-of-this-world discovery. Committed to hands-on and online, real-world learning, Purdue offers a transformative education to all. Committed to affordability and accessibility, Purdue has frozen tuition and most fees at 2012-13 levels, enabling more students than ever to graduate debt-free. See how Purdue never stops in the persistent pursuit of the next giant leap at purdue.edu.

Note to Journalists: A photograph of Maureen McCann is available for journalists to use via a Google Drive folder.

Petro Questions and (Some) Answers – Energy Institute at Haas