US says Taiwan's exclusion from WHO caused loss of lives 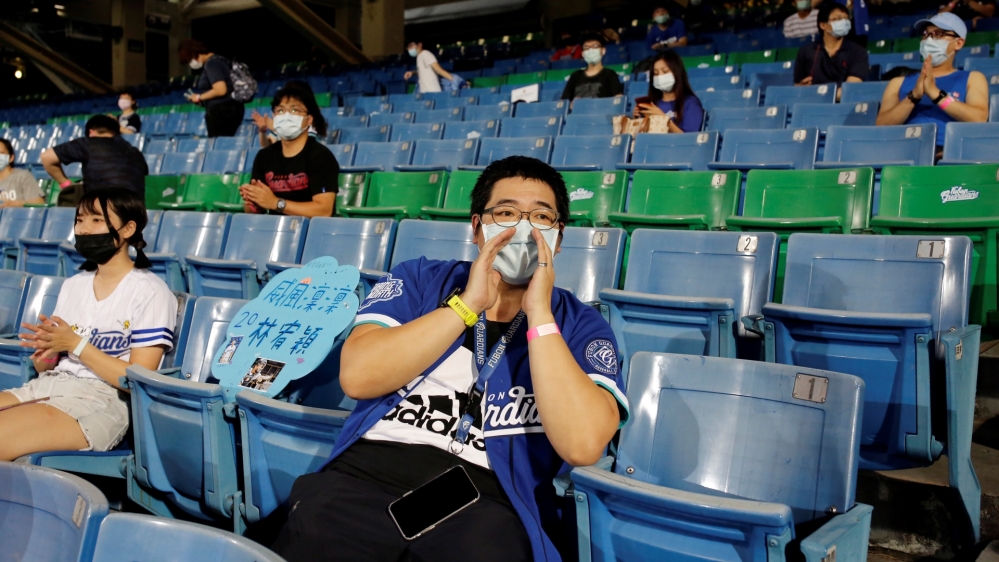 Taiwanese baseball fans at the first professional league game to allow an audience since the outbreak of coronavirus in Taipei May 8, 2020 [Ann Wang/Reuters]

A top US government commission has said the World Health Organization’s (WHO) exclusion of Taiwan and refusal to allow it to share best practices on tackling the coronavirus pandemic have jeopardised global health, causing deaths across the globe and imperilling the territory’s 23 million people.

The report (PDF) on Tuesday came as the United States and Taiwan stepped up lobbying for Taipei to be allowed access to next week’s meeting of the WHO’s decision-making body, the World Health Assembly.

The document, titled “Beijing’s Deadly Game” and produced by the US Congress’s US-China Economic and Security Review Commission, praised Taiwan’s effective response to the pandemic and said its exclusion from the United Nations health agency contributed to “critical delays” in the timely receipt of accurate guidance for other countries in the early stages of the outbreak.

The self-ruled island, which Beijing claims as its own, has reported only 440 coronavirus cases and seven deaths, thanks to early and effective prevention work. Taiwan began screening travellers from Wuhan, the city at the centre of China’s outbreak, on December 31, the same day Chinese authorities informed the WHO of cases of pneumonia in the central city.

“Had the WHO allowed Taiwan’s health experts to share information and best practices in early January, governments around the world could have had more complete information on which to base their public health policies,” said the US report.

Such information could have prompted a “faster and more effective global response” to COVID-19, the respiratory illness caused by the new virus.

“The lives lost as a result of these missteps offer a tragic reminder of how global health is compromised by the WHO’s politically motivated exclusion of Taiwan,” the report said, adding that the move also limits timely, complete, and reliable access to Taiwan’s research, best practices, and expertise.

Taiwan has long accused the WHO of failing to respond to its requests for information on the coronavirus. But the WHO strongly disputes the claim, saying Taipei has been given all the help it needs.

In recent weeks, the territory has intensified a campaign demanding its observer status be restored at the World Health Assembly. China barred Taiwan’s participation in 2016 after the election of President Tsai Ing-wen, who Beijing views as a separatist. She rejects the charges.

The US has strongly backed Taiwan’s WHO effort, with the Senate on Monday approving a bill backing the restoration of Taipei’s observer status at the assembly. On Tuesday, the US State Department also urged social media to tweet in support of the island’s participation in the body.

.@WHO will host the World Health Assembly (WHA) on May 18. We strongly support Taiwan’s participation & encourage everyone to #TweetforTaiwan! Spread the word that #Taiwan deserves to share the success of their #TaiwanModel w the world in the fight against #COVID19. #WHACountdown

The WHO said it has no mandate on its own to invite Taiwan. The agency’s lawyer, Steven Solomon, told an online news briefing on Monday that only member states could decide who attends the assembly.

China has denounced Taiwan’s attempts as a political stunt aimed at promoting the island’s formal independence.

The state-owned Global Times lambasted what it called US support for Taiwanese separatism, saying on Tuesday: “The only consequence that may ensue is the mainland considering ending this senseless game by solving the Taiwan question once and for all via non-peaceful means.”

The row has added yet another dimension to US-China tensions already heightened by a trade war and heated discussions over Chinese policies in Hong Kong and the South China Sea.

The US report, meanwhile, said China has used the pandemic to intensify military and diplomatic pressure on Taiwan. “Chinese military aircraft crossed the median line of the Taiwan Strait three times in the early months of 2020, after only one such incursion in 2019,” it said.

“Peoples Liberation Army (PLA) forces participated in a joint air and maritime drill over two days in February involving back-to-back circumnavigating flights around the island, while a Chinese aircraft carrier and attached group of warships sailed near Taiwan in April.”

Beijing also continued its efforts to isolate Taiwan, by threatening to cut off all economic ties with the African kingdom of Eswatini if it did not break off relations with Taipei.

Separately, China also berated New Zealand for its support for Taiwan’s participation at the WHO, saying Wellington should “stop making wrong statements” on the issue to avoid damaging bilateral ties.

It also called on France on Tuesday to cancel a weapons contract with Taiwan, warning that the deal could harm diplomatic relations between Paris and Beijing.

Those who pressure always get their comeuppance in the end. Like-minded friends that stick together & remain true to the principles of justice & fairness will prevail. JW https://t.co/4xveAPCvbg

“Those who pressure always get their comeuppance in the end. Like-minded friends that stick together & remain true to the principles of justice and fairness will prevail,” he said in a Twitter post.

Today’s Taiwan was the result of the Chinese civil war, which brought Mao Zedong’s Communists to power on the mainland in 1949. The rival Nationalists, led by Chiang Kai-shek, fled to Taiwan, located about 160km (100 miles) off China’s east coast, and set up their government there.

The territory has never declared independence, although in many ways it acts like a nation, with its own foreign ministry and military. A poll by the US-based Pew Research Center on Tuesday found about two-thirds of Taiwanese do not identify as Chinese, highlighting the challenge China would face in bringing the island under its control.

US calls on Yemen’s Houthis to release local embassy staff