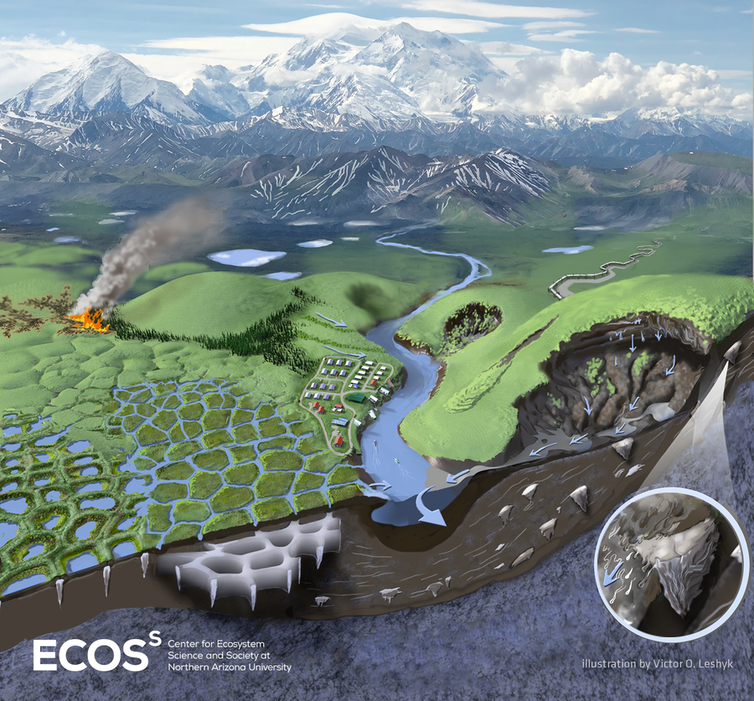 Across the Arctic, strange things are happening to the landscape.
Massive lakes, several square miles in size, have disappeared in the span of a few days. Hillsides slump. Ice-rich ground collapses, leaving the landscape wavy where it once was flat, and in some locations creating vast fields of large, sunken polygons.
READ MORE: How thawing permafrost is transforming the Arctic
It’s evidence that permafrost, the long-frozen soil below the surface, is thawing. That’s bad news for the communities built above it – and for the global climate.
As an ecologist, I study these dynamic landscape interactions and have been documenting the various ways permafrost-driven landscape change has accelerated over time. The hidden changes underway there hold warning for the future.

An illustration shows some of the ways permafrost affects the Arctic landscape. Victor O. Leshyk, from Schuur et al. 2022. Permafrost and Climate Change: Carbon Cycle Feedbacks from the Warming Arctic. Annual Review of Environment and Resources Volume 47 (in press)
What is permafrost?
Permafrost is perennially frozen soil that covers about a quarter of the land in the Northern Hemisphere, particularly in Canada, Russia and Alaska. Much of it is rich with the organic matter of long-dead plants and animals frozen in time.
These frozen soils maintain the structural integrity of many northern landscapes, providing stability to vegetated and unvegetated surfaces, similar to load-bearing support beams in buildings.
As temperatures rise and patterns of precipitation change, permafrost and other forms of ground ice become vulnerable to thaw and collapse. As these frozen soils warm, the ground destabilizes, unraveling the interwoven fabric that has delicately shaped these dynamic ecosystems over millennia. Wildfires, which have been increasing across the Arctic, have been increasing the risk.

Gullies created by thawing soil drain a lake in the Arctic Coastal Plain of northern Alaska. Christian Andresen and Mark J. Lara, CC BY-ND
Under the surface, something else is active – and it is amplifying global warming. When the ground thaws, microbes begin feasting on organic matter in soils that have been frozen for millennia.
These microbes release carbon dioxide and methane, potent greenhouse gases. As those gases escape into the atmosphere, they further warm the climate, creating a feedback loop: Warmer temperatures thaw more soil, releasing more organic material for microbes to feast on and produce more greenhouse gases.
The evidence: disappearing lakes
Evidence of human-caused climate change is mounting across the permafrost extent.
The disappearance of large lakes, multiple square miles in …