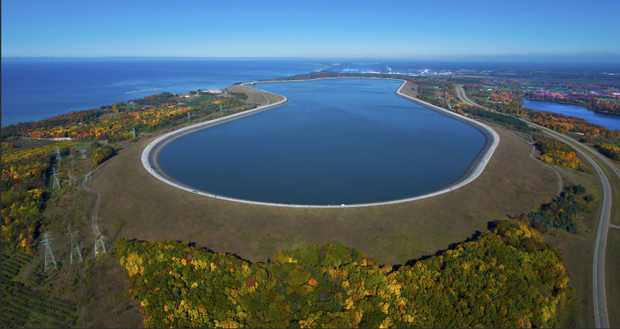 An aerial view of the Ludington Pumped Storage Plant near Ludington, Mich. The plant generates electricity by pumping water from Lake Michigan to a reservoir on top of a bluff, then releasing it through giant turbines as needed. Advocates of pumped storage call such facilities the “world’s largest batteries.” (AP photo/Consumers Energy)
LUDINGTON, Mich. – Sprawled like a gigantic swimming pool atop a bluff overlooking Lake Michigan is an asphalt-and-clay pond holding enough water to produce electricity for 1.6 million households.
It’s part of the Ludington Pumped Storage Plant, which uses simple technology: Water is piped from a lower reservoir – the lake, in this case – to an upper one, then released downhill through supersized turbines.
Supporters call these systems “the world’s largest batteries” because they hold vast amounts of potential energy for use when needed for the power grid.
The hydropower industry considers pumped storage the best answer to a question hovering over the transition from fossil fuels to renewable energy to address climate change: where to get power when the sun isn’t shining or the wind isn’t blowing.
“I wish we could build 10 more of these. I love ’em,” Eric Gustad, community affairs manager for Consumers Energy, said during a tour of the Ludington facility.
But the utility based in Jackson, Michigan, has no such plans. Environmental and logistical challenges and potential costs in the billions led Consumers to sell another would-be site near the lake years ago. It’s now upgrading the existing plant with co-owner DTE Energy.
Constructing a new one “doesn’t make financial sense,” Gustad said. “Unless we get some help from the state or federal government, I don’t see it happening any time soon.”
Stuck in neutral
The company’s decision illustrates the challenges facing pumped storage in the U.S., where these systems account for about 93% of utility-scale energy in reserve. While analysts foresee soaring demand for power storage, the industry’s growth has lagged.
The nation has 43 pumped storage facilities with a combined capacity of 22 gigawatts, the output of that many nuclear …