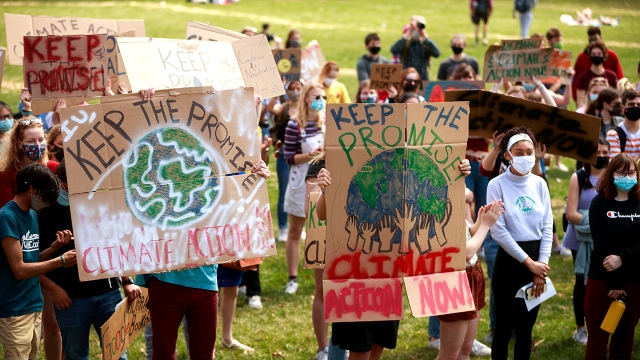 Protesters advocate for carbon neutrality during the Keep the Promise rally in Bloomington, Indiana, in March 2021. (Jeremy Hogan/SOPA Images/LightRocket via Getty Images)

On April 22, people around the world commemorate Earth Day with events that call attention to a wide range of environmental concerns, especially global climate change.

To mark the occasion, here’s a look at what recent Pew Research Center surveys have found about Americans’ views on climate change and renewable energy sources.

The data for this post was drawn from multiple Pew Research Center surveys. Most findings are from a Center survey of 10,237 U.S. adults conducted from Jan. 24 to 30, 2022.

Everyone who took part in the surveys is a member of the Center’s American Trends Panel (ATP), an online survey panel that is recruited through national, random sampling of residential addresses. This allows for nearly all U.S. adults to have a chance of selection. The surveys are weighted to be representative of the U.S. adult population by gender, race, ethnicity, partisan affiliation, education and other categories. Read more about the ATP’s methodology.

Roughly two-thirds of Democrats and independents who lean toward the Democratic Party (65%) say addressing climate change should be a top priority for Biden and Congress, compared with just 11% of Republicans and GOP leaners.

Three-quarters of Americans say that human activity, such as the burning of fossil fuels, contributes to climate change at least some, with 46% saying it contributes a great deal, a separate January 2022 Center survey found. About a quarter of Americans (24%) say the burning of fossil fuels and other human activity contributes not too much or not at all to climate change. Views on this question have held mostly steady in recent years.