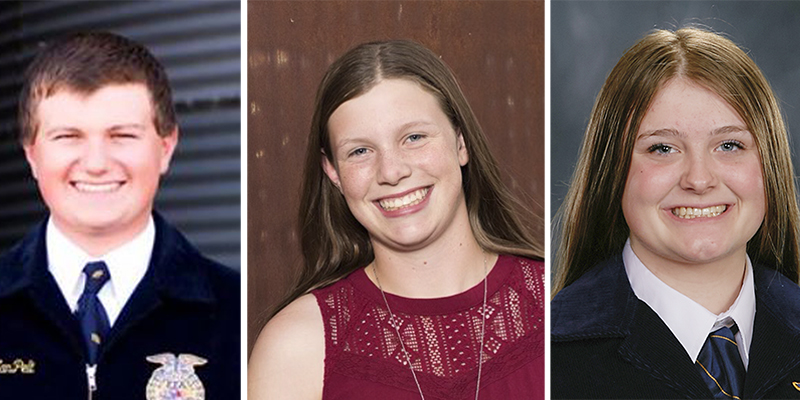 A trio of area students have been recognized as Top Agricultural Education Achievers by the Minnesota FFA Association.
Austin’s Ryan and Katie VanPelt and Hayfield’s Brooke Bauer were among the 121 students named statewide for the recognition in various areas of Supervised Agricultural Experiences (SAEs). They are also finalists for several awards that will be named during its state convention April 24-26.
The convention will be held at the Minnesota State Fairgrounds, the University of Minnesota’s St. Paul campus and 3M Arena at Mariucci.
The area students were named in the following:
• Ryan VanPelt (Austin): Environmental Science and Natural Resources Management
• Katie VanPelt (Austin): Equine Science-Entrepreneurship
• Brooke Bauer (Hayfield): Dairy Production-Entrepreneurship
The top student in each category will be named during general sessions throughout the three-day event which is expected to draw more than 4,000 FFA student members as well as teachers, supporters and guests.
“These finalists have earned Proficiency Awards in areas that relate to agriculture, and developed skills they can apply to their future careers,” said Lavyne Rada, Minnesota FFA program manager. “SAEs are part of the agricultural education programs and help them to apply academic and career skills within areas of agriculture, food and natural resources pathways.”
An SAE can involve entrepreneurship, placement or internships in a business, research, exploration, service learning or school-based e …