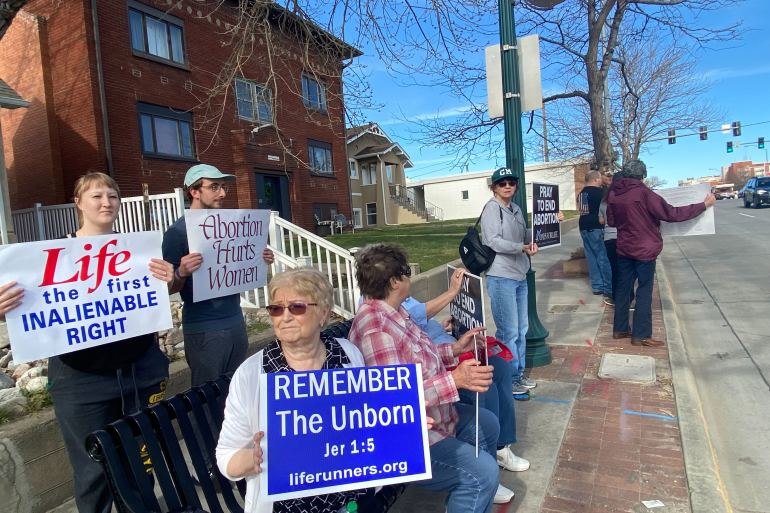 More than 100 people have been attending weekly anti-abortion prayer vigils outside the site of a future Casper, Wyoming, clinic offering abortion and other health care services. (Arielle Zionts / KHN)

Abortion rights supporter Rikki Hayes demonstrates near the site of a Wellspring Health Access clinic due to open this summer. Hayes was among a cluster of protesters attending a weekly prayer vigil held by abortion opponents. (Arielle Zionts / KHN)

CASPER, Wyo. — A modest, tan building sandwiched between a gas station and a small apartment house near this Western city’s downtown has become an unexpected focal point of America’s abortion debate, just weeks before Wyoming could outlaw the procedure.

Inside, a nonprofit is renovating the space into a clinic that, beginning in June, would be the only one in Wyoming to provide procedural abortions. The Casper clinic also would become the closest option for people in what the nonprofit’s founders describe as an “abortion desert,” extending into western Nebraska and South Dakota.

Outside, on a recent Thursday, more than 100 abortion opponents gathered for a prayer vigil on the sidewalk along a busy five-lane street. A smaller group of vocal abortion rights advocates assembled nearby.

The protest groups congregate weekly as work to open the clinic continues, despite an imminent U.S. Supreme Court decision expected to reverse constitutional protections for abortion rights provided by the landmark 1973 case Roe v. Wade. A recently passed “trigger law” in Wyoming would take effect days after such a ruling, banning most abortions in the state.

One man walked through the crowd yelling anti-religious slogans, while a group of teens took a less confrontational approach to counter the vigil’s message by chanting “My body, my choice.”

Several drivers passing by honked in support of the anti-abortion group or yelled expletives and, “It’s my body!”

The opposing groups of demonstrators don’t see eye to eye on much, but they seemed to agree on one thing: They’re surprised the clinic is opening in Wyoming, an overwhelmingly Republican state where 70% of voters supported Donald Trump in the 2020 presidential election — the highest percentage of any state.

“I never thought I would see an abortion clinic come to Wyoming, let alone Casper, just because it is more conservative,” 39-year-old Robin Holmes said during the vigil.

Holmes wore a custom T-shirt and held a homemade poster, both saying “Unborn Lives Matter.” She said her daughter became pregnant in her teens but decided against abortion and is now raising the child.

Rikki Hayes, who supports the new clinic, found a piece of cardboard on her way to the vigil and held it up after writing “Mind your own business!”

“I didn’t think in a million years that we, in Casper, would ever get one. We’re in Wyoming,” said Hayes, a 21-year-old coffee shop manager.

The future site of the Wellspring Wyoming Health Access clinic is a residential-style building sandwiched between a gas station and a small apartment house near downtown Casper, Wyoming.(Arielle Zionts / KHN)

The idea to open a clinic in Casper came from Wyoming activist Christine Lichtenfels. She shared her suggestion with Julie Burkhart, a Colorado resident and veteran of the national abortion rights movement

The only other Wyoming clinic offering abortions is in Jackson, a five-hour drive west of Casper and near the Idaho border. It offers only medication abortions up to 10 weeks of gest …