Beyond Magical Thinking: Time to Get Real on Climate Change – Yale Environment 360 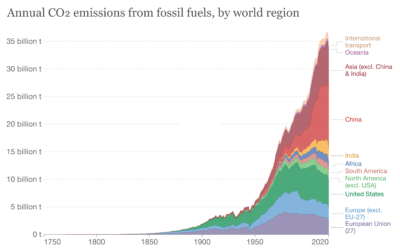 The UN’s first climate conference took place in 1992 in Rio de Janeiro, and in the intervening decades we have had a series of global meetings and countless assessments and studies. Annual climate change conferences began in 1995 (in Berlin) and included much publicized gatherings in Kyoto (1997, with its completely ineffective agreement), Marrakech (2001), Bali (2007), Cancun (2010), Lima (2014), and Paris (2015).

In Paris, about 50,000 people flew to the French capital to attend yet another conference at which they were to strike, we were assured, a “landmark” — and also “ambitious” and “unprecedented” — agreement. Yet the Paris Agreement did not codify any specific reduction targets by the world’s largest emitters. And even if all voluntary non-binding pledges were honored (something utterly improbable), the Paris accord would still result in a 50 percent increase of emissions by 2030.
Some landmark.
So what have we done to avert, or to reverse, global warming in the three decades since Rio?

The data are clear: Between 1989 and 2019, we increased global anthropogenic greenhouse gas emissions by about 67 percent. Affluent countries like the United States, Canada, Japan, Australia, and those in the European Union — whose per capita energy use was very high three decades ago — did reduce their emissions, but only by about 4 percent. Meanwhile, Indian greenhouse gas emissions increased 4.3 times, and Chinese emissions rose about 4.8 times. Atmospheric CO2 levels, which for centuries fluctuated narrowly at close to 270 parts per million (ppm), …