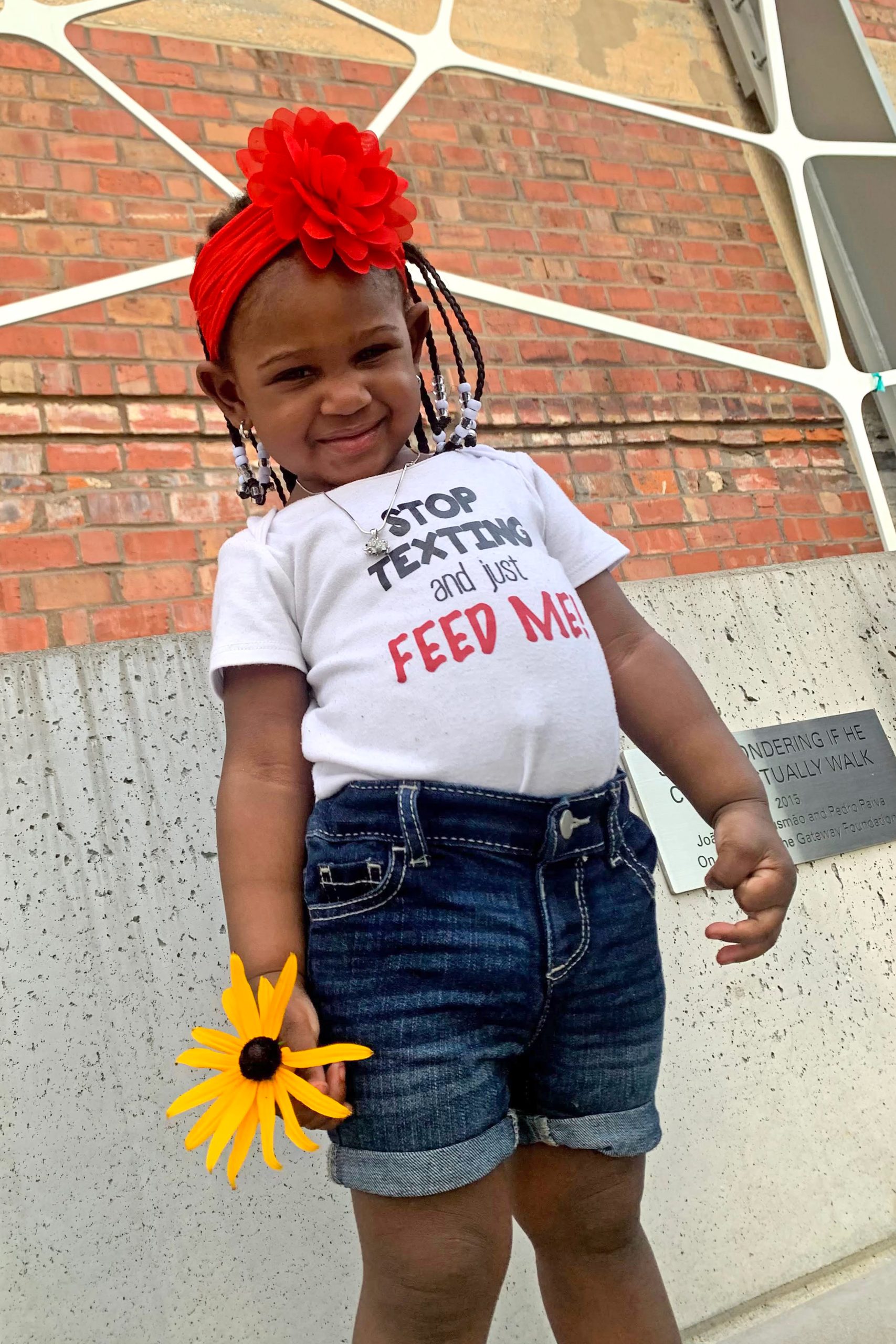 Calyia Stringer had a smile on her face the day she posed for a photo with a yellow flower in her hand. The toddler beamed with pride as she showed off the bloom before handing it to her godmother, Jatoria Foster.

“She was so happy,” Foster said. “That was one of the best memories I have of her.”

No one thought the same image would end up on the lid of Calyia’s casket — until the unthinkable happened. The 3-year-old was killed last September when a stray bullet tore through her grandmother’s bedroom in East St. Louis, Illinois. For Calyia’s funeral, her family wanted to remember the happiest moments of her life, so the funeral home decorated her casket with three photos of the girl.

Calyia Stringer poses for a photo with a yellow flower in her hand after spending the day with her godmother, Jatoria Foster. Calyia was killed a month after her 3rd birthday.(Jatoria Foster)

The art of wrapping a casket in imagery — similar to the way companies wrap logos around cars, trucks, and buses — is increasing in popularity as mourners look for memorable ways to celebrate their loved ones’ lives. Across the country, casket wrap companies create custom designs, often for grieving parents who have lost their children to trauma, including from gun violence. Although diseases sometimes kill kids too young, firearm-related injuries were the leading cause of death for children in the United States in 2020, ahead of motor vehicle crashes, according to an analysis published in the New England Journal of Medicine.

The wraps for children look like something one “would see in a child’s room, not as a child’s casket,” said Damian Ferek, president of CasketWraps, the West Virginia company that designed Calyia’s custom casket. His company has been creating them since 2014, when the marketing business he runs got a request to wrap a casket. Kids’ caskets often feature superheroes and rainbows, unicorns and teddy bears, alongside photos of the smiling children.

Desmond Upton Patton, a professor of social work and sociology at Columbia University who researches grief and violence on social media, said this emerging art form is a coping mechanism for grieving families. For some parents, he said, casket wraps allow them to “take control of an experience that they essentially had no control over.”

“It allows them to reimagine the narrative,” Patton said. “It’s a different way of telling the story of a loved one that moves beyond the pain and focuses on the beauty. That is a beautiful definition of resilience.”

Sukeena Gunner vividly remembers seeing her 14-year-old son’s casket after he was killed. A rising football star, Jaylon McKenzie died three years ago after shots rang out at a house party in Venice, Illinois, just across the Mississippi River from St. Louis.

“Once they opened the door, I saw my baby laying in that casket, it paralyzed me,” Gunner recalled. At that moment, Gunner said, she fell to her knees. But a series of photos, including images of Jaylon in his football uniform, embossed on the outside of his casket helped Gunner remember the highlights of Jaylon’s life, not just his death.

Sukeena Gunner holds a pair of football cleats that belonged to her son, Jaylon McKenzie. Jaylon, 14, died in 2019 after shots rang out at a house party in Venice, Illinois. (Cara Anthony / KHN)

At her home in Belleville, Illinois, Sukeena Gunner thumbs through a copy of Sports Illustrated. Her son, Jaylon McKenzie, was featured in the magazine’s “Future Issue” in 2018. Seven months later, Jaylon was fatally shot at a house party in Venice, Illinois. (Cara Anthony / KHN)

“He was a kid that would run 40 touchdowns a year, anywhere between four to five a game,” Gunner said.

The custom design was a f …