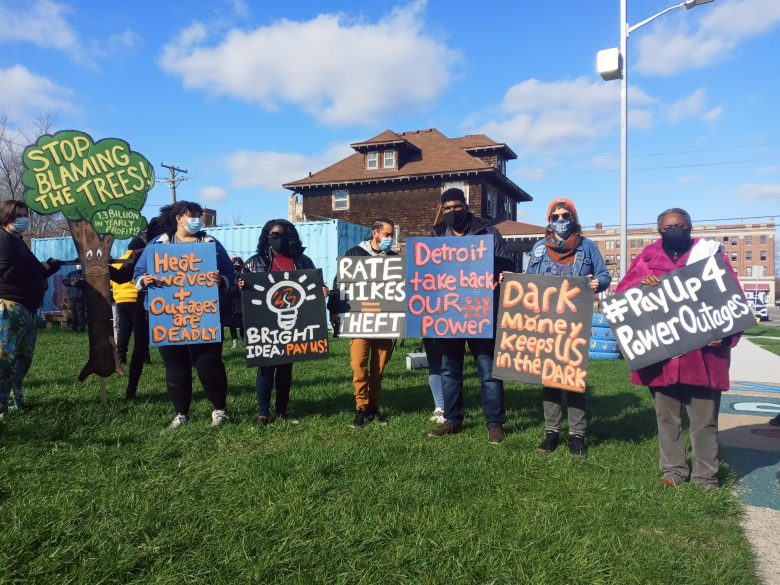 This article is co-published by the Energy News Network and Planet Detroit with support from the Race and Justice Reporting Initiative at the Damon J. Keith Center for Civil Rights at Wayne State University.

When Michelle Jones lost electricity for three days last summer, the $200 worth of food she had just bought to feed herself, her daughter, and her granddaughter got spoiled in the fridge and then thrown into the garbage.

After she couldn’t salvage her groceries, she was denied a $25 reimbursement credit for her troubles. It was frustrating for Jones, who was on a $300 monthly payment plan for utility service.

The issue is top of mind for many Detroiters, who already pay a significant share of their income in utility bills, after severe storms last year left thousands of people across southeast Michigan without electricity for days.

Jones, an energy activist, rattled off these grievances to over a dozen bundled-up onlookers on a chilly afternoon last Wednesday at the Avalon Village community space in Highland Park. Environmental justice activist groups, including Soulardarity, We the People, Detroit Action, the Michigan Environmental Justice Coalition, and others, organized the rally.

Invoking the oratorical gifts of a pastor, Jones asked the crowd a few simple questions.

“Are you tired yet?” she asked.

They responded with a smattering of yeses.

“Are you tired of watching your energy bill go up?”

“While your energy service goes down? Are you tired of power outages where you lose food?”

A third yes resounded. Jones was tired. They were all tired.

Activists at an energy accountability rally at the Avalon Village community space in Highland Park.

Jones was among dozens of energy activists who gathered to support a new package of bills introduced by state Reps. Abraham Aiyash, D-Hamtramck, and Yousef Rabhi, D-Ann Arbor, to increase financial relief for customers during power outages and force more accountability from utilities.