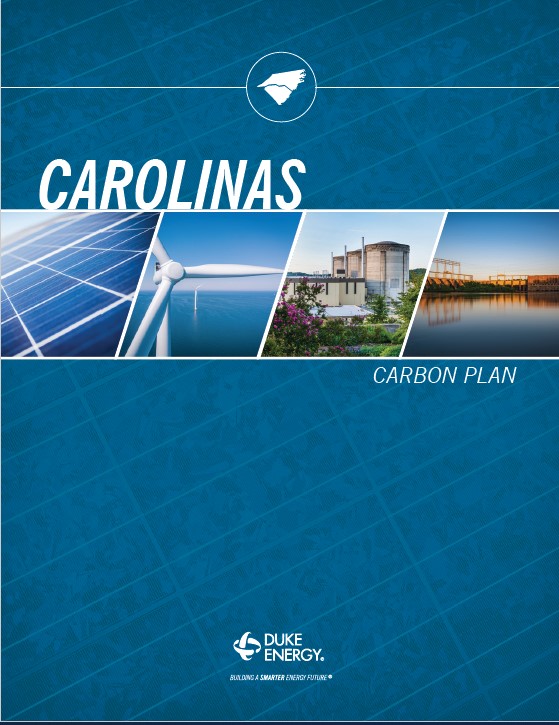 Charlotte-based Duke Energy has submitted a draft plan to the state detailing how the company plans to use solar, wind and other renewables to reduce carbon dioxide emissions and reach carbon neutrality.
The energy corporation filed with the North Carolina Utilities Commission the proposed plan that commits to reaching a 70% carbon dioxide emissions reduction by 2030 and carbon neutrality by 2050.
The draft Carolinas Carbon Plan is under the clean energy bill Gov. Roy Cooper signed last fall. House Bill 951 directs the state Utilities Commission to develop a plan no later than Dec. 31 with electric public utilities, including stakeholder input, for the utilities to achieve the authorized reduction goals.
The Utilities Commission is to hold public hearings on the proposal by the deadline.
By 2035, the company says the clean energy transition would include more than three times the current level of solar, diversification of renewables with wind resources, growth in energy storage to support renewables, and initial steps to develop zero-emission load-following resources to enable coal retirements and eliminate natural gas use.
“We are committed to bringing our customers and communities affordable, reliable, carbon-free energy as quickly as possible,” said Stephen De May, Duke Energy’s North Carolina president in a statement. “Customers in North Carolina and South Carolina deserve an orderly energy transition that supports communities and maintains affordable rates, while ensuring the continued reliable service and economic competitiveness on which both states depend.”
Duke Energy has retired two-thirds of its coal plants in North Carolina and South Carolina. To retire the rest by the end of 2035, the company has outlined a strategy that mixes solar, storage, natural gas, wind and small modular nuclear generation, energy efficiency programs and other measures to reduce energy use. Customers are expected to see minimal costs from carbon plan over the next two years, according to the company.