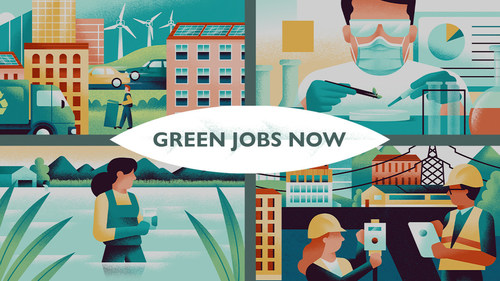 Though Mississippi lags behind several other states’ efforts, Greenville, Miss., Mayor Errick D. Simmons believes Mississippi green jobs will explode in number as federal infrastructure dollars become available and the region confronts issues such as those involving the Mississippi River.

“They’re coming down the line,” Simmons, co-chair of the Mississippi River Cities and Towns Initiative, told WorkingNation in an interview. “They exist somewhat, but the bipartisan infrastructure law is providing millions and billions of dollars for clean jobs, green jobs, and has a focus on climate resilience and creating more equitable and sustainable communities. I think you’re gonna start seeing a ripple effect.”
In fact, an estimated 6,249 green workers already are on the job in Mississippi across industries, according to Emsi Burning Glass, the firm that collected and analyzed original data for “Green Jobs Now.” However, the analysis projects employment demand for green jobs in the state will increase by just 3.5% over the next five years, below the national average of 5.7%.”Green Jobs Now: Mississippi” identifies the state’s most in-demand green skills – “renewable energy,” “energy conservation,” and “energy efficiency,” according to the data – and occupations where green skills matter. It suggests certain workers could get annual salary boosts of $2,000 or more by applying green skills, with boosts upwards of $5,000 for some positions. That demonstrates the value to workers of learning green skills and to local employment economies of having training available. In Mississippi, Emsi Burning Glass estimates 416,810 workers, if given access to training, could be reskilled into green jobs.”Green Jobs Now: Mississippi” is the latest state-focused installment of the WorkingNation/Emsi Burning Glass “Green Jobs Now” series, a data-driven journalism project to define and identify green jobs and skills, pinpoint where workers can find them, and present a vivid snapshot of the green economy. Prior installments examined green jobs in Pennsylvania, Louisiana, Colorado, Arkansas, Illinois, and nationally.The Mississippi reporting, supported by a grant from the Walton Family Foundation, will include:Organizations seeking to access WorkingNation’s data and experts may reach out to the contact below.About WorkingNationWorkingNation is a nonprofit journalism organization telling stories about solutions to the jobs skills gap disrupting our economy. Follow us on YouTube, Twitter, LinkedIn, Facebook and Instagram.Media Contact:Steve Delsohn[email protected]805-358-3318SOURCE WorkingNation
…