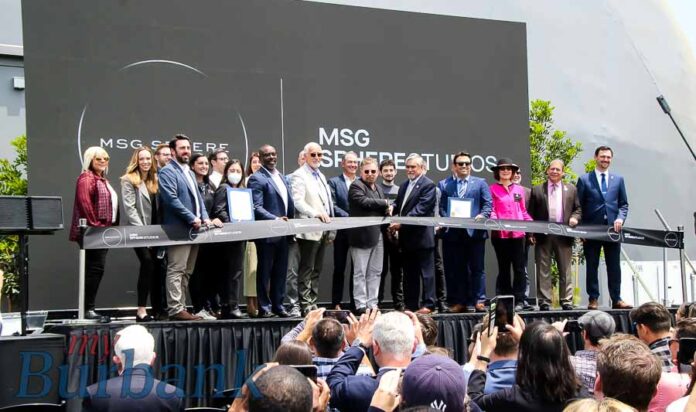 Being on the cutting edge is truly essential in this day and age. In fact, it’s essential.

Madison Square Garden Entertainment is at the top of that mountain and on a slightly overcast day recently, the state-of-the-art MSG Sphere Studios [Big Dome] had a ribbon-cutting ceremony.

Jim Dolan, the Executive Chairman, and CEO was the primary speaker and said, “this is the future of entertainment, and we want to create something different.”

Dolan, whose father Charles was the pioneer and founder of Cablevision, said this is a new medium.

In the beginning, it was black and white, then color, and then high definition.

Additionally, artists, producers, and directors will work together to create viewing experiences that will not be seen anywhere else.

“It was myself and Mr. Dibble, who was standing next to me in my office six, seven years ago,” Dolan said of the genesis of the Big Dome.

All the content will be created in Burbank and at this studio which is located at 3401 Empire Avenue.

“It’s one of those things that I, as the mayor and the residents of Burbank, are so appreciative of their [MSG Entertainment] vision that they decided to put the Big Dome here,” Talamantes said. “Burbank is the media capital of the world. This really puts it globally, and it gives an extra layer of worthiness to Burbank. Moving forward it will be great for the city of Burbank.”

Afterward, several media members were allowed inside the Big Dome, which is a quarter-size compared to the one being constructed in Las Vegas, to watch a seven-minute demonstration on the ultra-high-resolution LED screen.

The MSG Sphere is a brand new and exciting entertainment medium and the world’s first large-scale venue that will combine cutting-edge technology with multi-sensory storytelling to deliver an immersive experience at an unparalleled scale.

The initial MSG Sphere, which is 160,000 square feet, is under construction in Las Vegas at the Venetian and is expected to open its doors in the second half of 2023.

The goal according to Dolan is to have several MSG Sphere’s around the globe.

The Big Dome stands nearly 100 feet high and at its base is 190 feet in diameter and has approximately 28,000 square feet of occupiable space.

The LED screen is a quarter-scale, full-resolution prototype of the LED screen being built at the Venetian, and it features the same shape, curvature, and number of pixels.

(Photo by© Ross A Benson)