Star Wars Jedi: Survivor is just one game coming in a packed 2023 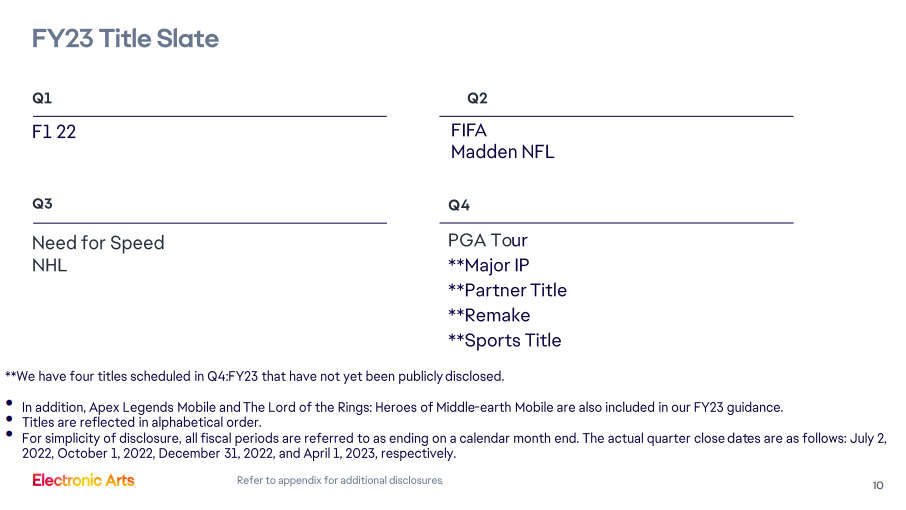 Did you miss a session from GamesBeat Summit 2022? All sessions are available to stream now. Learn more.

More and more games are already slipping out of 2022. This is leaving the holiday season to games like Call of Duty: Modern Warfare II and Pokémon Scarlet and Violet. But it is also already leading to a log jam of releases in the first quarter of 2023. That could include some major releases from Bethesda as well as Electronic Arts and more.

EA is already confirming a number of releases for quarter ending March 31. In a slide in its most recent earnings report, the company noted it would have five games for that period. It did not, however, mention any of those games by name except for PGA Tour.

Instead, EA claimed it would have a major IP, a partner title, a remake, and a sports title. While I’m unable to determine what the partner title is, it is likely a game similar to the Unraveled or It Takes Two. But the sports title is the new Super Mega Baseball. The remake is Dead Space, and the major IP is Star Wars Jedi: Survivor, according to people familiar with EA’s plans.

Internally, EA originally wanted to release both Dead Space and Jedi this year. But now, EA has confirmed that Dead Space Remake is launching January 27. And then it plans to launch the sequel to Star Wars Jedi: Fallen Order before the end of March. In addition to the partner title and sports games, that’s already a busy start to the year.

And that is just one publisher.

Microsoft, meanwhile, has Redfall and Starfield to fit into its year. The company may try to get at least one of those games out before the end of its fiscal year on June 30. And it may even try to fit one into Q1 alongside Dead Space and Star Wars.

And publishers still have a handful of 2022 games that could slip into early 2023. God of War: Ragnarok still doesn’t have a specific release date for this year, for example.

For big gaming companies, delays aren’t quite as big of a problem as they once were. Yes, ever delay does cost extra money, but it doesn’t seem to hurt sales potential. That’s true even if you move from the holiday season into February. Or, at least, that’s the lesson many publishers are taking from the success of FromSoftware’ …