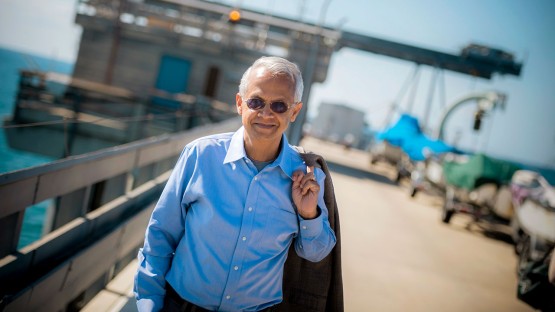 Policies that focus solely on decarbonization will not be sufficient to keep the Earth’s temperature below the “tipping point” threshold scientists have long warned could result in a runaway greenhouse warming effect, according to research published May 23 in the Proceedings of the National Academy of Sciences.
While carbon dioxide is the chemical most responsible for climate change, four other pollutants – methane, black carbon soot, lower-atmosphere ozone smog and hydrofluorocarbon refrigerants – contribute almost half the heat trapped to-date that cause global warming.
Reducing atmospheric levels of all of these pollutants, known as super pollutants, will be necessary to keep global temperatures from rising beyond 1.5 degrees Celsius above pre-industrial levels, the internationally accepted guardrail beyond which the world’s climate is expected to pass irreversible tipping points.
“We have a near-term and long-term climate crisis,” said Veerabhadran Ramanathan, adjunct professor in the Department of Global Development in Cornell’s College of Agriculture and Life Sciences (CALS), and co-corresponding author of “Mitigating Climate Disruption in Time: a Self-Consistent Approach for Avoiding Both Near-Term and Long-Term Global Warming.”
“In the near-term, the planet is likely to cross the 1.5 degrees C warming threshold in the next 10 years,” Ramanthan said. “On the longer-term, with unchecked emissions, the warming can exceed the catastrophic 3 degrees C by end of century.”
The overwhelming majority of climate change mitigation efforts focus on the l …