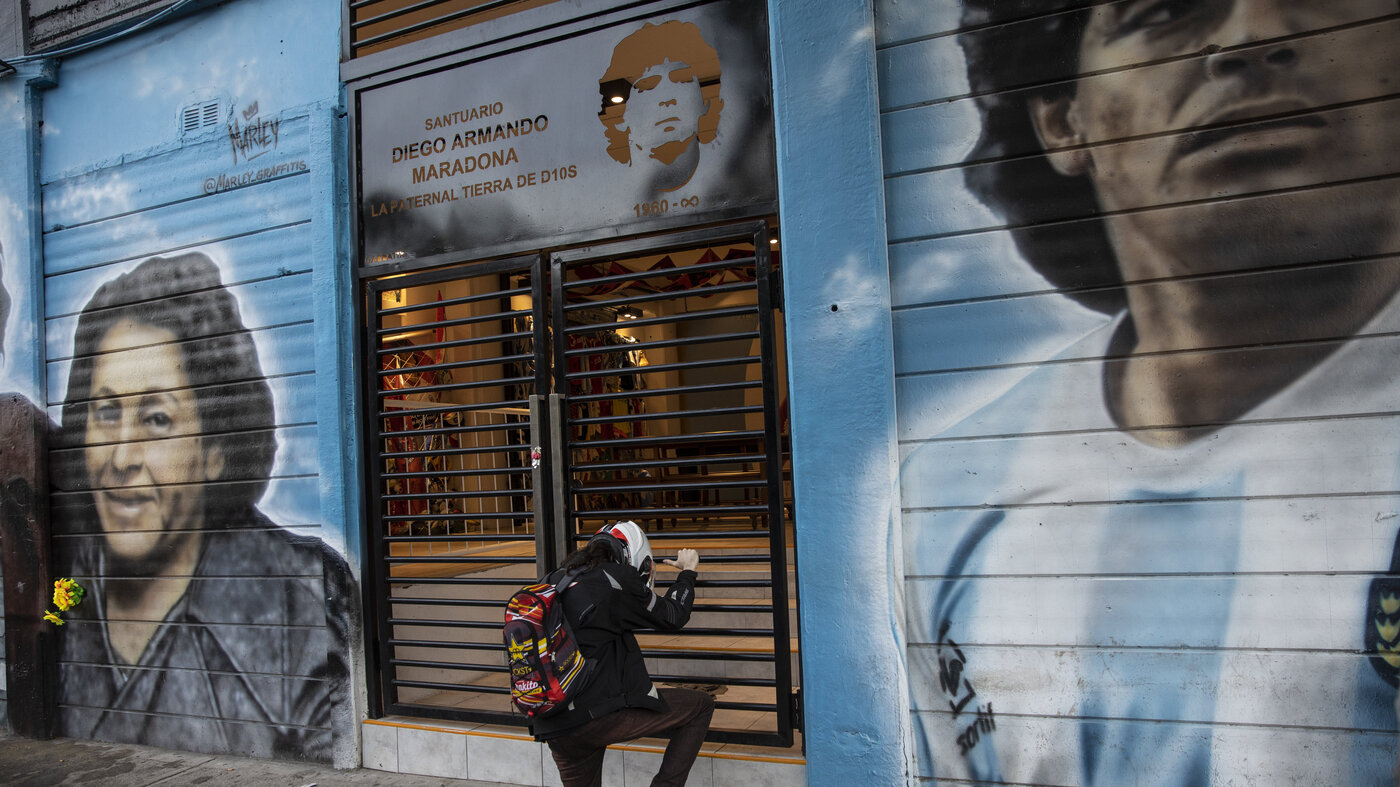 A man prays in front of a sanctuary for the late soccer star Diego Maradona at Argentinos Juniors stadium in Buenos Aires, Argentina, last November.

Doctors, nurses and other medical staff who had soccer legend Diego Maradona in their care are now facing a homicide trial, after an Argentine judge granted prosecutors’ request to advance the case against them. Maradona died of heart failure and pulmonary edema in November of 2020. He had been recuperating from brain surgery, but instead of being in a hospital, was recovering at a home in the Buenos Aires suburbs — and prosecutors say Maradona’s doctors and other caregivers should have known that he was at risk, and done more to save him. The defendants are neurosurgeon Leopoldo Luciano Luque, psychiatrist Agustina Cosachov, psychologist Carlos Ángel Díaz, home care coordinator Nancy Edith Forlini, nursing coordinator Mariano Ariel Perroni, nurses Ricardo Omar Almirón and Dahiana Gisela Madrid, and clinician Pedro Pablo Di Spagna. Several of those charged have publicly denied being responsible for Maradona’s death. Luque, who was the soccer great’s personal doctor, has insisted he had little to do with ongoing care for Maradona in the weeks before he died.

In May, Luque’s attorneys said that two companies — Medidom and Swiss Medical — were in charge of the home hospitalization, which initially was meant to help Maradona overcome an addiction to alcohol. Questions about the circumstances of Maradona’s death at age 60 prompted a search of Luque’s office and the formation of a 20-member medical panel to investigate. They determined that he died after exhibiting symptoms during a “prolonged, agonizing period” that should have caused alarm. Prosecutors said Maradona died after “an unprecedented, totally deficient and reckless hospitalization at home,” as the Buenos Aires Times reports. Judge Orlando Díaz issued his order on Wednesday — the same day Argentine fans were commemorating the 36th anniversary of Maradona’s famous “Hand of God” goal to defeat England during a run to the 1986 World Cup championship. The jersey Maradona wore that day recently sold at auction for more than $9 million.
…