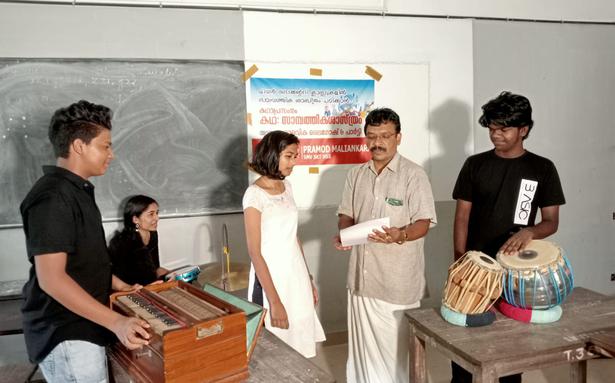 A schoolteacher has taken Kathaprasangam route to explain micro and macroeconomics.

A schoolteacher has taken Kathaprasangam route to explain micro and macroeconomics.
When the school remain closed during the height of the pandemic, Pramod Malyankara, a teacher at the SNV Sanskrit Higher Secondary School in North Paravur, busied himself on a novel project for teaching his subject Economics. The idea was to impart important Economic lessons for the higher secondary students in the form of a now near-extinct traditional artform Kathaprasangam. He spent nearly six months on the project and scripted a 15-minute-long story fittingly named Economics. A fortnight back, he enlisted the prize-winning Kathaprasangam team of the school led by Malavika Laikosh to present the story. “It took the team just five days to master the story since they were adept in the artform. I shot the story and is now in the process of editing it, all with the help of students,” said Mr. Malyankara who had bought the camera and related accessories out of his pocket for such initiatives. The story features the key principles of micro and macroeconomics, global recession, the working of the foreign exchange markets and the duty of the Reserve Bank of India while renowned Economists Adam Smith and J.M. Keynes also find a mention. “Presenting key Economic lessons in the form of a Kathapras …