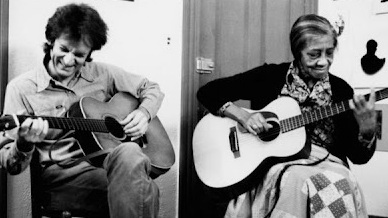 As a Black woman playing fingerstyle guitar, Yasmin Williams has been hailed as a “hero for a new generation.” She says she often felt like an anomaly- until she discovered a YouTube video of Elizabeth Cotten. “I knew about Sister Rosetta Tharpe and other kind of more rock and roll or electric players and singers and I loved them too, but just seeing an acoustic guitarist was amazing.” But when Williams tried to learn more about Cotten she discovered that most accounts of her life skipped over the hardships she overcame, focusing only on her late-career success.

Cotten was born in Chapel Hill, N.C. around 1893. Her father worked in the mines. Her mother cleaned houses. When Cotten’s brother was off at work, Sis Nevills, as she was called then, snuck into his room and took his guitar off the wall. Since she was left-handed, she turned it so the bass strings were at the bottom, therefore “backwards.” She used her thumb to play the melody and her fingers for the low notes. When Cotten’s brother discovered her playing, he tried to offer advice, “‘You got it upside down, turn it around or change the strings.” She tried but liked the sound better the other way, so she kept with it, practicing for hours on end. After the third grade, Cotten left school to work. Making 75 cents a month cleaning houses and cooking, she saved up to buy her guitar. Cotten picked up new songs after hearing them only once or twice, and wrote her songs, including “Freight Train.”

“Freight Train” became a staple of the 1960s folk revival. Many critics now consider it a timeless classic.

Cotten was married in her mid-teens and had a daughter. A pastor discouraged her from playing “wordly” songs. But by the mid-1940s she had left the church and her marriage and she was living with family in Washington, D.C. when she applied for a job at a local department store, where she was hired to sell dolls. When a girl wandered away, Cotten saved the day by reuniting her with her mother. She didn’t know it, but that woman was composer Ruth Crawford Seeger, wife of ethnomusicologist Charles Seeger, and mother to budding folk musicians Mike and Peggy, and stepson Pete- who was well on his way to stardom as a member of the Weavers.

The Seegers hired Cotten, whom they called “Libba,” to cook and clean and look after the kids. They were surprised to discover that she was a musician, too, says Peggy Seeger. “When I was about 15 I walked into the kitchen and I saw her playing the guitar that was hanging on the wall. And she was playing ‘Freight Train.’ Then she started trotting out songs. She knew a lot of songs. We would have been happy to do the cooking and cleaning if she would just play!”

Seeger recorded “Freight Train” for a 1957 album called The Origins of Skiffle. The liner notes describe the song as being “learned” and “collected” from Cotten, but not necessarily written by her.

In 1956, 21-year-old Peggy took Cotten’s “Freight Train” to England. “Skiffle was kind of at its height,” Seeger recalls. “I arrived in March of 1956, and I was the flavor of the month because I was female, I was American, I was young, I played guitar and banjo, and I was footloose and fancy-free. So, I just sang wherever anyone asked me to sing and I even sang in places they didn’t ask me to sing.” “Freight Train,” which Seeger also recorded, sounded traditional, even timeless. She says it was picke …