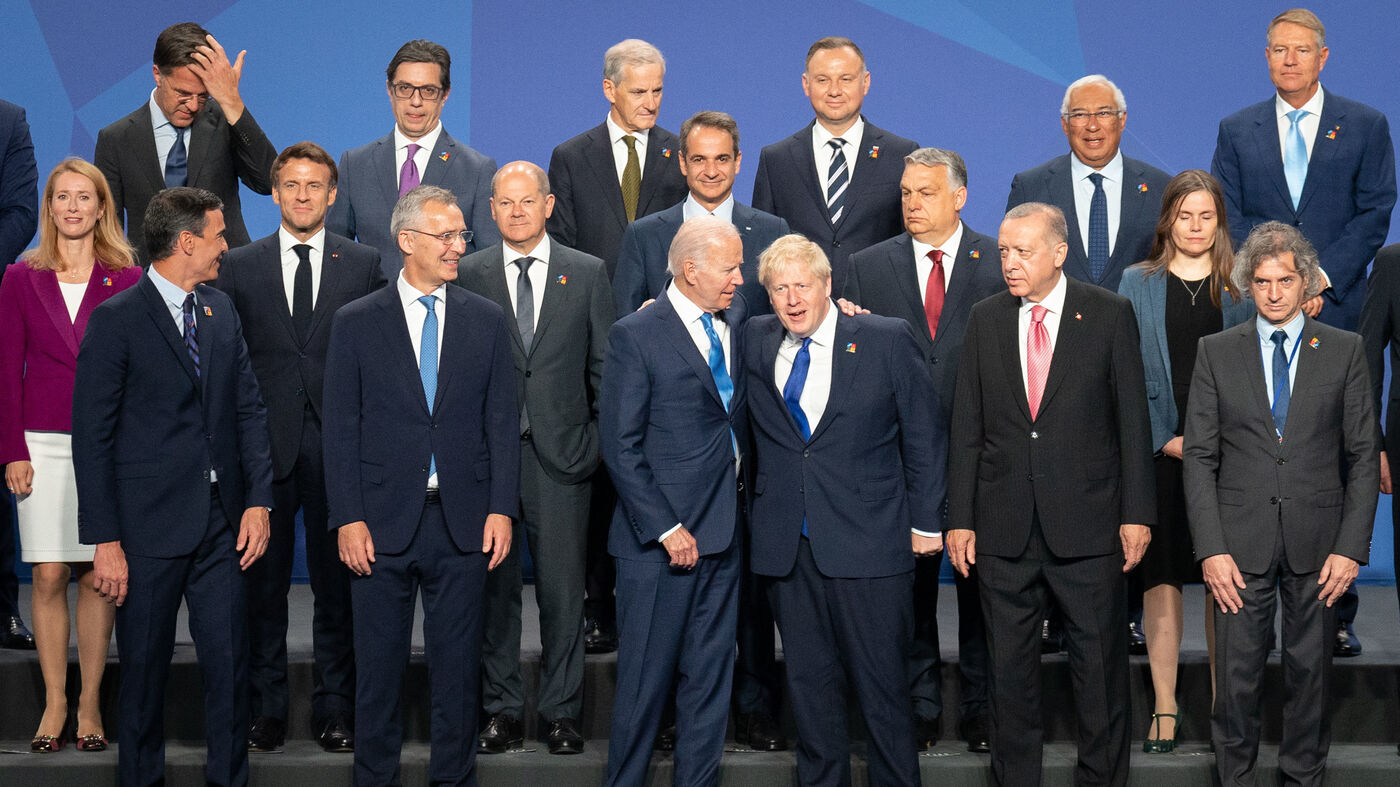 British Prime Minister Boris Johnson stands beside President Biden and other world leaders posing for a photo during the NATO summit on Wednesday in Madrid, Spain. The defense alliance declared Russia a direct threat and members are committing to boost troop levels and position heavy equipment along NATO’s eastern flank.

As Wednesday draws to a close in Kyiv and in Moscow, here are the key developments of the day: NATO formally invited Sweden and Finland to join the alliance, in the most historic ripple effect of Russia’s invasion of Ukraine. On Tuesday, Turkey had lifted its objections to the two countries’ membership. NATO also declared Russia the “most significant and direct threat” to its members. The U.S. said it would boost its military presence in Europe, including a permanent army headquarters in Poland. Ukrainian President Volodymyr Zelenskyy addressed NATO leaders, reiterating the country’s need for more weapons and aid. Russian forces made “incremental advances” to encircle Lysychansk, the last Ukrainian-controlled town in the eastern Luhansk region, according to Britain’s defense ministry. The agency also called it “a realistic possibility” that Russia’s deadly missile strike on a shopping mall in Kremenchuk on Monday was intended to hit nearby infrastructure. Ukrainian authorities said 144 of the country’s soldiers have returned in a prisoner swap with Russia. Of those released, 95 are fighters who defended the Azovstal steel plant in the besieged port city of Mariupol, which Russian troops captured in May.

The United Nations Office of the High Commissioner for Human Rights released a report concluding that Russia’s invasion of Ukraine has “created disastrous consequences for the civilian population and had a devastating impact on the enjoyment of human rights, notably their rights to life, security, health, food, water, education and housing.” The U.N. has documented more than 10,000 civilian casualties since the war began in February. In-depth War in Ukraine is driving demand for Africa’s natural gas. That’s controversial. How different is the war coverage in the U.S. versus Ukraine? NPR’s 1A talks with the executive director for The Aspen Institute Kyiv. Special report Russia’s war in Ukraine is changing the world: See its ripple effects in all corners of the globe. Earlier developments You can read more daily recaps here. For context and more in-depth stories, you can find more of NPR’s coverage here. Also, listen and subscribe to NPR’s State of Ukraine podcast for updates throughout the day.
Loading…