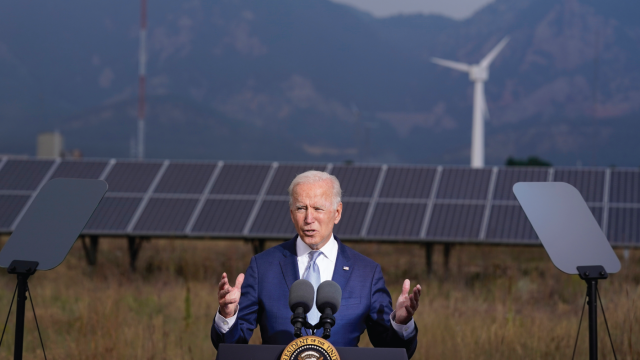 Pew Research Center conducted this study to understand how Americans view climate, environmental and energy issues. For this analysis, we surveyed 10,282 U.S. adults from May 2 to 8, 2022.

Everyone who took part in the survey is a member of the Center’s American Trends Panel (ATP), an online survey panel that is recruited through national, random sampling of residential addresses. This way, nearly all U.S. adults have a chance of selection. The survey is weighted to be representative of the U.S. adult population by gender, race, ethnicity, partisan affiliation, education and other categories. Read more about the ATP’s methodology.

Here are the questions used for this report, along with responses, and its methodology.

More than a year into Joe Biden’s presidency, the public is divided over the administration’s approach to climate change: 49% of U.S. adults say the Biden administration’s policies on climate change are taking the country in the right direction, while 47% say these climate policies are taking the country in the wrong direction.

Climate change has been among the top priorities of the Biden administration, whose actions on the issue include rejoining the Paris Climate Agreement and passage of an infrastructure bill with funding for renewable energy. More recent legislative efforts on climate have stalled in Congress, and a Supreme Court decision in June curtailed the ability of the Environmental Protection Agency to regulate power plant emissions.

Ratings of Biden’s approach to climate change – and the federal government’s role dealing with the issue – are deeply partisan. A majority of Republicans and independents who lean to the GOP (82%) say Biden’s climate policies are taking the country in the wrong direction. Among Democrats and Democratic leaners, most say Biden is moving the country in the right direction on climate policy (79%).

But in a sign of Democratic frustration with progress tackling climate change, there’s discontent within the party even among those who say Biden’s policies are taking the country in the right direction. Among Democrats who back the direction of the administration’s climate policies, 61% say the administration could be doing a lot more on climate; far fewer (37%) say they are doing about as much as can be expected.

Despite these polarized attitudes, the Pew Research Center survey of 10,282 U.S. adults conducted from May 2 to 8, 2022, finds broad public agreement on some specific policies to address climate change. A large majority of Americans (90%) say they favor planting about a trillion trees to absorb carbon emissions to help reduce the effects of climate change, and 79% favor providing a tax credit to encourage businesses to develop technology to capture and store carbon emissions. Both of these policies are backed by sizable majorities of Republicans and Democrats alike.

The survey, fielded before the Supreme Court’s decision limiting the EPA’s authority to regulate power plant emissions, finds 72% of Americans favor requiring power companies to use more energy from renewable sources, like wind and solar, and 68% back taxing corporations based on the amount of carbon emissions they produce. Partisan gaps are more pronounced on these approaches to reduce the effects of climate change, but they are not absolute. About half of Republicans – including majorities of moderate Republicans – say they favor these approaches to limiting emissions, as do most Democrats.

Climate change is making extreme weather events more frequent and severe. A majority of Americans (71%) say their community has experienced at least one of five forms of extreme weather in the past year, including severe weather such as floods or intense storms (43%), long periods of unusually hot weather (42%), droughts or water shortages (31%), major wildfires (21%), or rising sea levels that erode shorelines (16%).