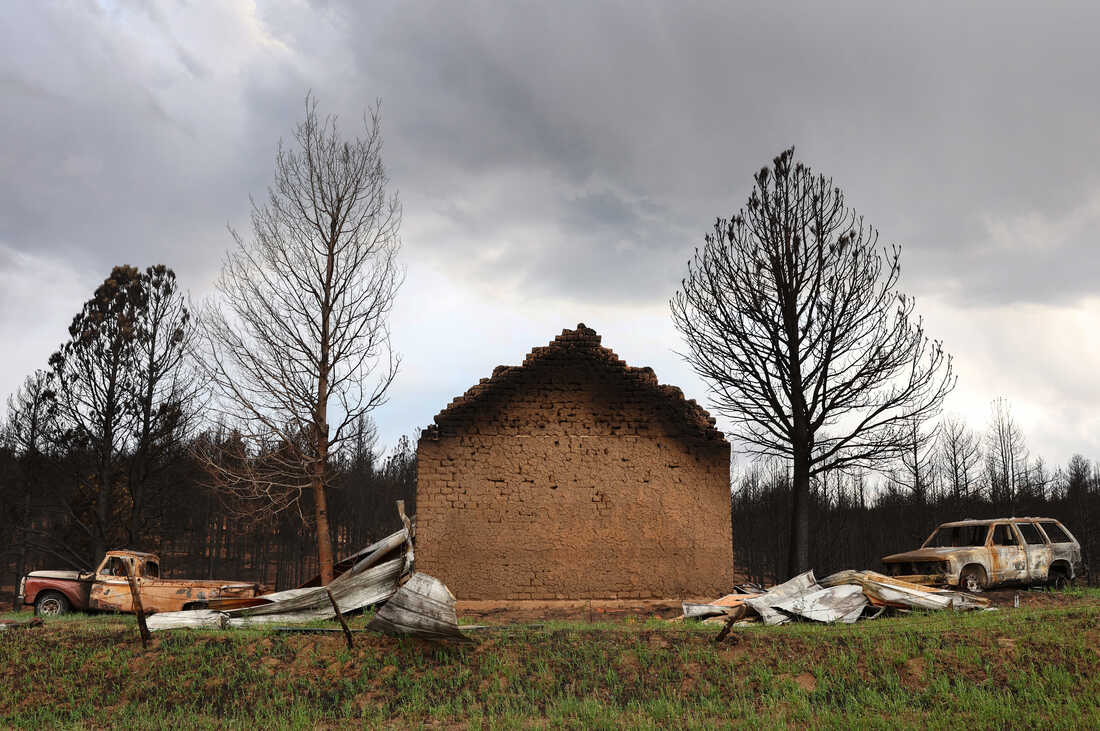 A scorched structure and vehicles stand on a property mostly destroyed by the Hermits Peak/Calf Canyon Fire on June 2, near Las Vegas, N.M.

The federal Government Accountability Office (GAO) is launching an investigation after U.S. Forest Service-controlled burns that escaped caused the largest wildfire ever recorded in New Mexico. The GAO is examining controlled burn policies at the Forest Service and other federal land agencies. On May 20, USFS Chief Randy Moore halted all so-called prescribed fires on its land for a 90-day safety review. The New Mexico fire has burned more than 340,000 acres and is still not fully contained. But many fire ecologists and forestry experts are concerned that this “pause” is only worsening the wildfire risk. Critics say it’s merely masking the agency’s dangerously incremental, outdated and problematic approach to intentional burns and fire mitigation, a policy that has failed to adapt to climate change and megadrought. “A lot of the planning tools that fire managers rely upon for planning prescribed burns were built under a climate that no longer exists,” says biologist and professor Matthew Hurteau, who studies the intersection of climate change, wildfire and forest ecosystems at the University of New Mexico. “That’s a systemic problem,” he says.

Controlled burns are seen by forest ecologists as perhaps the most essential tool for reducing the risk of catastrophic wildfire and helping to undo a century of fire suppression policy that has worsened wildfire conditions that now annually wreak havoc across large swaths of the West. Climate change makes controlled burns more urgent and dangerous Hurteau and others are concerned that the Forest Service — and other fire agencies — continue to fail to put climate change at the fore of decision-making, despite mounting scientific evidence and the agency’s own stated goals about reducing dangerously high levels of built-up fuel in western forests. “We’ve seen pretty substantial changes to the climatic conditions, particularly here in the Southwest, but across much of the Western U.S. And we need to address that by developing new tools that account for the fact that we’ve got these persistent drying trends in a much warmer and much drier atmosphere,” Hurteau says. The Forest Service’s recently released internal review of the New Mexico burn only magnifies those criticisms, as it amounts to a stunning admission by the agency that it essentially failed to take climate change into account when conducting an intentional burn during a historic drought.

Numerous sections of the report underscore that point, including noting that prescribed fire officials failed to realize it was set “under much drier conditions than were recognized.” And it notes that a better understanding “of long-term drought and climate factors versus short term weather events” would have helped. “Seems astounding,” fire ecologist Timothy Ingalsbee tells NPR’s Here and Now. “Never again should we have the excuse that we failed to include climate conditions and climate data in our fire management actions. That’s just the era we live in,” says the former Forest Service wildland firefighter who now directs the group Firefighters United for Safety, Ethics and Ecology. “I can understand why people are upset. It sounds like the ‘dog ate my homework’ kind of excuse,’ he says.

Human-caused climate change is driving ever drier conditions, extreme weather and megadrought. That’s turning live vegetation into fuel even faster and making the forests’ old built-up fuel more explosive. Ingalsbee and other experts in the field say the pace and scale at which the USFS is implementing intentional fire is dangerously insufficient. He hopes the agency uses this 90-day burn pause to start to make good on its stated goal of making a fundamental shift away from prioritizing wildfire suppression.
“If we were to shift those resources and funding into prescribed burning, have as many crews as possible to manage prescribed burning, that would be a big help.”

Sen. Ron Wyden, a Democrat from Oregon, is demanding answers from federal agencies on wildfire mitigation, spending and priorities.