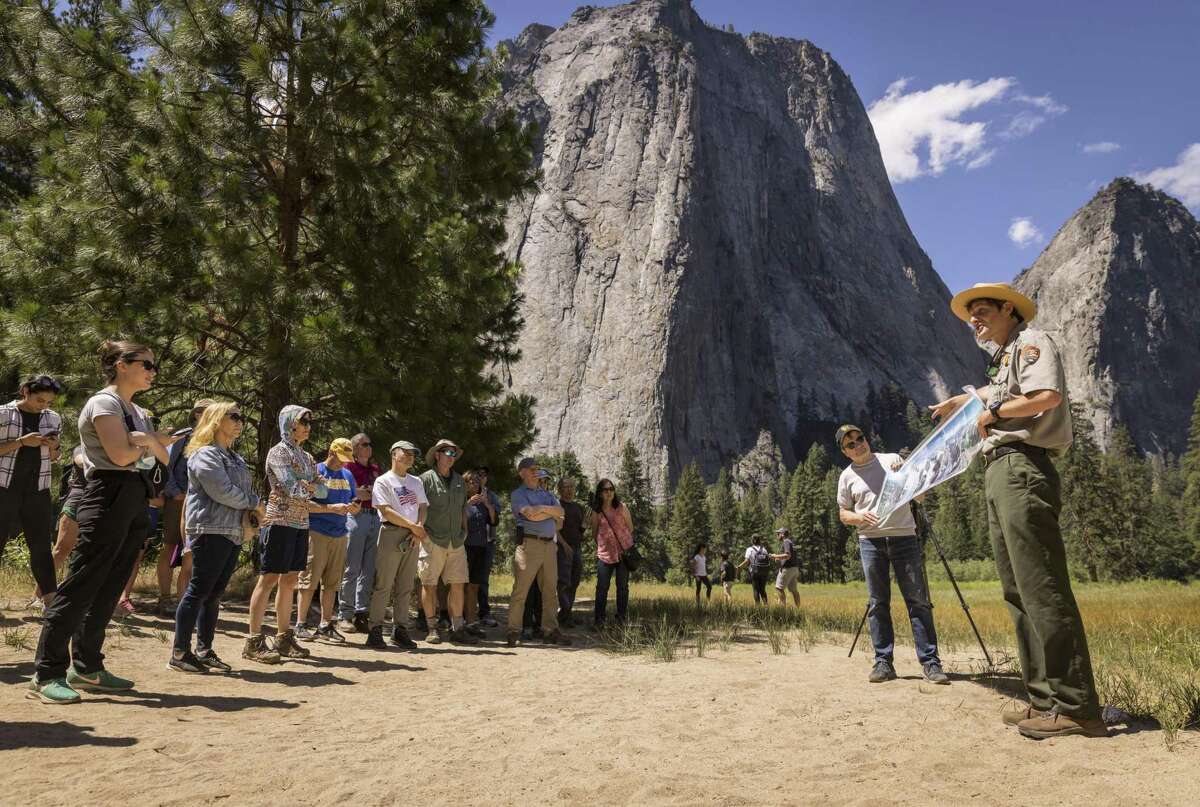 YOSEMITE VALLEY — Yosemite National Park, like much of the country’s most spectacular wilderness, is bearing the brunt of climate change.Forests are burning, glaciers are melting and waterfalls are drying up, a scenario that reflects the disproportionate vulnerability that scientists say national parks face as the climate warms. The toll was on extraordinary display last month with the catastrophic flooding of Yellowstone National Park.

This week, in an effort to address the burden of climate change on the national park system, a delegation from Congress arrived in Yosemite to try to better understand the impacts. Led by Democratic Rep. Mike Quigley of Illinois, the vice chair of the House Sustainable Energy and Environment Coalition, the group of eight legislators, including three from California, planned to meet and tour Yosemite with park managers and researchers through Friday.

“We want to learn from them what specifically we can do to help,” Quigley told The Chronicle.

Members of Congress and their staffs listen to a presentation about glaciers and the formation of granite structures like El Capitan as they visit Yosemite National Park on Wednesday.Carlos Avila Gonzalez/The Chronicle

What exactly the delegation will do about the climate problem, however, remains uncertain. Political division within the broader body of Congress has made it difficult to produce a national policy that scientists say will sufficiently slow the planet’s warming or, at the very least, provide enough funding for parks to help them adapt.

“Part of the reason we’re doing this (tour) is to keep Congress focused on the issue,” Quigley said. However, he added, “We’re not going to get anything dramatic done without bipartisan support.”

The only Republican in the delegation was Rep. Tom McClintock of Roseville (Placer County), whose district includes Yosemite. The other two Californians were Reps. Ted Lieu, D-Torrance (Los Angeles County), and Jerry McNerney, D-Stockton.

Yosemite National Park officials greeted the delegation on the lawn of the Ahwahnee hotel Wednesday morning with stark examples of how warming temperatures are altering the park’s landscape.

“If you look at the falls, there is not a lot of water there anymore,” said Nicole Athearn, chief of resources management and science at the park. “The reason for that is the snowpack melted so quickly.”

While change is natural, Athearn said, the speed of it is not. The accelerated warming, whether it is reducing water supplies or hastening wildfire, has been so profound that it is forcing plants to relocate upslope and farther north — or perish, as has been the case with huge numbers of giant sequoia trees in the Sierra Nevada.

“There’s a mismatch between the ability of a species to change and the pace that the habitat is changing,” Athearn said.

Research has shown that the national park system’s roughly 425 sites, from the mountain parks in California to desert and coastal areas here and elsewhere, have been disproportionately affected by warming temperatures and drought.

The reason, according to Patrick Gonzalez, a forest ecologist and climate change scientist at UC Berkeley, is that the parks tend to be in extreme locations where climate change is accelerated.

“National parks, on average, are at higher elevations, they’re farther north in polar areas and they’re also in the arid Southwest,” Gonzalez said.

Since 1895, the annual average temperature on parkland increased 2.2 degrees Fahrenheit, twice as much as the United States as a whole, according to research by Gonzalez. Parks have also seen a greater decline in precipitation, his work shows.

The solution, Gonzalez and other scientists say, is to slow climate change by cutting greenhouse gas pollution from cars, power plants, industry and agriculture, a remedy that has largely eluded Washington and other governments internationally.

President Joe Biden worked with Congress for more than a year on legislation to aggressively tackle emissions, known as the Build Back Better bill, but the effort failed amid Republican opposition.

Congressional Democrats have recently tried to salvage parts of the package, though inflation and the war in Ukraine have heightened energy insecurity and made it politically unpalatable to quickly phase out climate-disruptive fossil fuels. The U.S. Supreme Court, meanwhile, has ruled that the Environmental Protection Agency can’t broadly regulate carbon emissions.

For parks, that leaves the option of building resiliency to climate change.

“We can do a lot to mitigate,” said McNerney, as he stood with the other members of Congress beneath the steep granite slopes of El Capitan, one of the stops on Wednesday’s tour. “We can provide money for those things.”

At Yosemite, park managers have increasingly used prescribed fire to make forests more robust, restored rivers and meadows so they hold onto more water, cleared invasive vegetation to give native plants and trees a foothold, and focused habitat improvement work in areas of threatened wildlife.

The budget of the National Park Service has generally increased to help with such projects in recent years, but it’s fallen short of what many say is needed, especially …