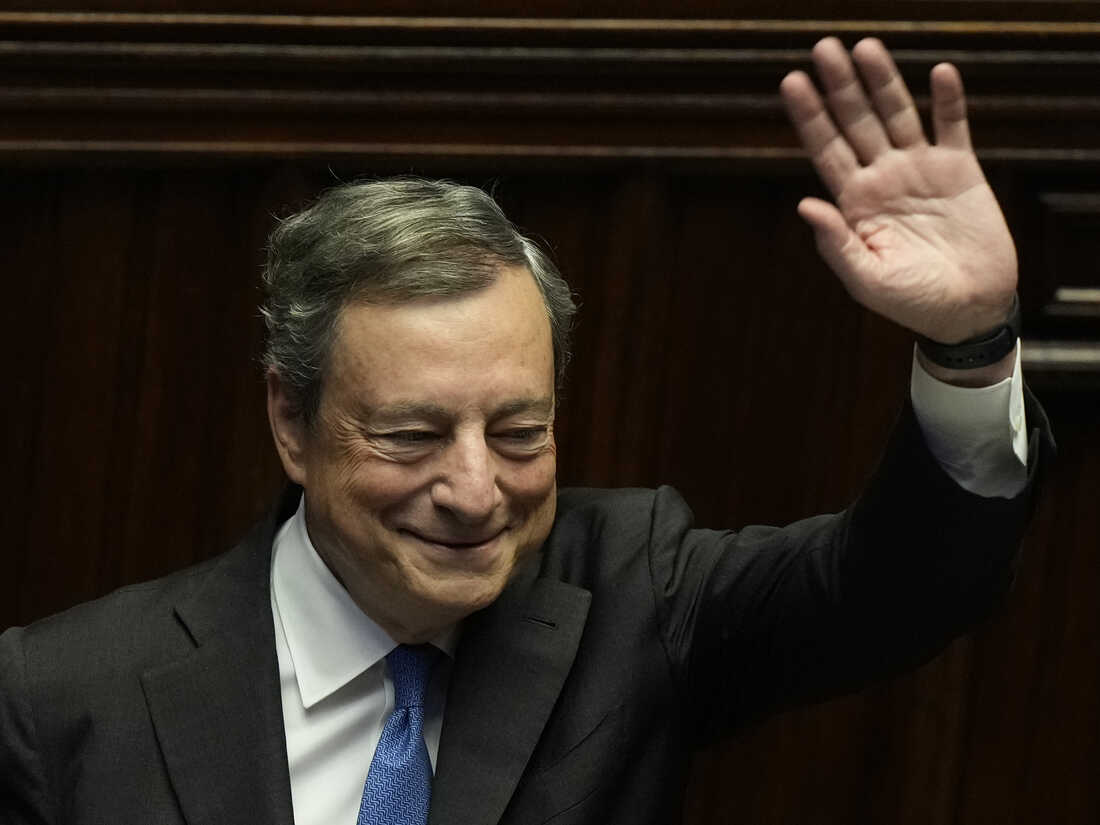 Italian Premier Mario Draghi waves to lawmakers at the end of his address at the Parliament in Rome on Thursday.

ROME — Italian Premier Mario Draghi resigned Thursday after key coalition allies boycotted a confidence vote, signaling the likelihood of an early election and a renewed period of uncertainty for Italy and Europe at a critical time. Draghi tendered his resignation to President Sergio Mattarella during a morning meeting at the Quirinale Palace. Mattarella, who rejected a similar resignation offer from the premier last week, “took note” of the new one and asked Draghi’s government to remain on in a caretaker fashion, the president’s office said. Draghi’s government of national unity imploded Wednesday after members of his uneasy coalition of right, left and populists rebuffed his appeal to band back together to finish the Italian Parliament’s natural term and ensure implementation of a European Union-funded pandemic recovery program. Instead, the center-right Forza Italia and League parties and the populist 5-Star Movement boycotted a confidence vote in the Senate, a clear sign they were done as partners in the former European Central Bank chief’s 17-month government. “Thank you for all the work done together in this period,” Draghi told the lower Chamber of Deputies on Thursday morning before going to see Mattarella. Clearly moved by the applause he received there, he repeated a quip that even central bank chiefs have hearts.

Italian newspapers on Thursday were united in their outrage at the surreal outcome, given Italy is dealing with soaring inflation and energy costs, Russia’s war against Ukraine and outstanding reforms needed to clinch the remainder of the EU’s 200 billion euros in recovery funds. “Shame,” headlined La Stampa on the front page. “Italy Betrayed,” said La Repubblica. “Farewell to Draghi’s Government,” said Corriere della Sera. Mattarella tapped Draghi – who earned the nickname “Super Mario” during his European Central Bank tenure for his “whatever it takes” rescue of the euro — to be Italy’s premier last year. He and his unity government were charged with pulling the country out of the pandemic and laying the groundwork to make use of the EU’s recovery funds. But the 5-Stars, the biggest vote-getter in the 2018 national election, had been chafing for months that their priorities of a basic income and minimum salary, among other agenda items, were being ignored. The movement also opposed Italy’s military aid to Ukraine. Last week, the 5-Stars boycotted a confidence vote tied to a bill aimed at helping Italians endure a cost-of-living crisis, prompting Draghi’s first offer to resign. Mattarella rejected the offer then and asked Draghi to return to Parliament to brief lawmakers on the situation. He did that on Wednesday, appealing to party leaders to listen to the calls for unity from ordinary Italians who signed petitions asking him to stay on.
“You don’t have to give the answer to me. You have to give it to all Italians,” he told lawmakers. While the next steps were unclear following Draghi’s second resignation, the unraveling of his governing coalition suggested Mattarella could dissolve Parliament after a period of consultations, paving the way for an early election as soon as late September or early October. The legislature’s current five-year term is due to expire in 2023. Mattarella planned o meet with the presidents of the upper and lower chambers of Parliament later Thursday, his office said. Such consultations usually precede a public statement from Mattarella about his intentions. Opinion polls have indicated neck-to-neck percentages for the center-left Democratic Party and the right-wing Brothers of Italy party, which had remained in the opposition to Draghi’s coalition. Democrat leader Enrico Letta said Parliament had betrayed Italy and urged Italians to respond at the polls. “Let Italians show at the ballot that they are smarter than their representatives,” he tweeted. The Brothers of Italy has long been allied with the center-right Forza Italia of ex-Premier Silvio Berlusconi and the League of Matteo Salvini, suggesting that a center-right alliance would likely prevail in any election and propel Brothers’ leader Giorgia Meloni to become Italy’s first female premier. Meloni, who has been gunning for an early election since before the crisis erupted, was triumphant. “The will of the people is expressed in one way: by voting. Let’s give hope and strength back to Italy,” she said …