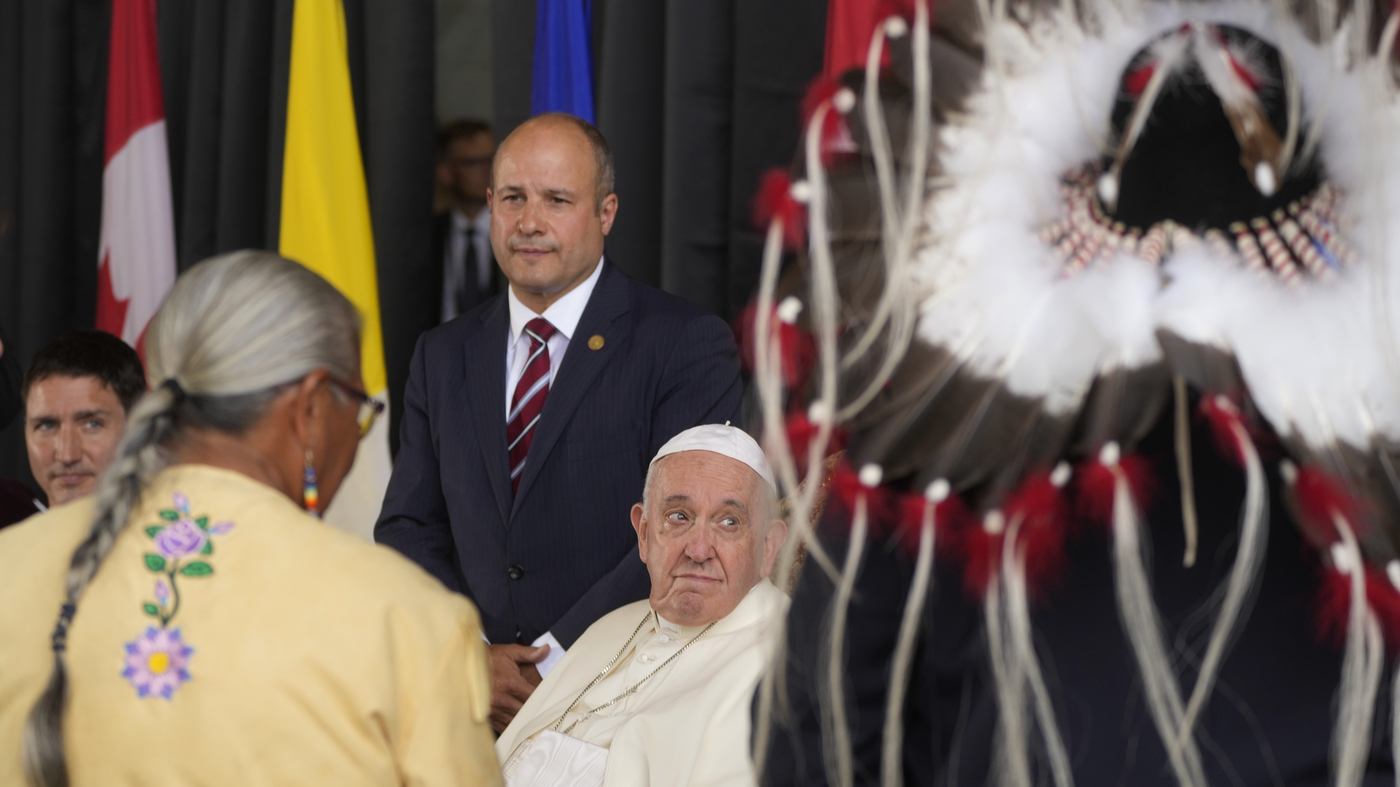 EDMONTON, Alberta — Thousands of Indigenous persons are expected to converge Monday on the small Alberta prairie community of Maskwacis to hear a long-awaited apology from Pope Francis for generations of abuse and cultural suppression at Catholic residential schools across Canada. Francis is scheduled to arrive in mid-morning at the site of the former Ermineskin Indian Residential School, now largely torn down. He will pause at the sites of the former school and nearby cemetery before speaking in a large open area to school survivors, their relatives and other supporters. Francis arrived Sunday in Edmonton, where he was greeted by representatives of Canada’s three main Indigenous groups — First Nations, Metis and Inuit — along with political and church dignitaries. The pope spent the rest of the day resting at a seminary in the provincial capital.

The Canadian government has admitted that physical and sexual abuse were rampant in the state-funded Christian schools that operated from the 19th century to the 1970s. Some 150,000 Indigenous children were taken from their families and forced to attend in an effort to isolate them from the influence of their homes, Native languages and cultures and assimilate them into Canada’s Christian society.

Francis’ six-day trip — which will also include other sites in Alberta, Quebec City and Iqaluit, Nunavut, in the far north — follows meetings he held in the spring at the Vatican with delegations from the First Nations, Metis and Inuit. Those meetings culminated with a historic April 1 apology for the “deplorable” abuses committed by some Catholic missionaries in residential schools. Thousands of children died from disease, fire and other causes. The discoveries of hundreds of potential burial sites at former schools in the past year has drawn international attention to the legacy of the schools in Canada and their counterparts in the United States.

Francis is now following through on a commitment to make that apology on Canadian soil. Maskwacis, about an hour south of Edmonton, is the hub of four Cree nations. Event organizers said they would do everything possible to make sure survivors can attend the event. Many will travel from park-and-ride lots, and organizers acknowledge that many survivors are elderly and will require accessible vehicles, diabetic-friendly snacks and other amenities.

Catholics operated a majority of the Canadian schools, while various Protestant denominations operated others in cooperation with the government. Prime Minister Justin Trudeau, who last year voiced an apology for the “incredibly harmful government policy” in organizing the residential school system, will also attend the Maskwacis event along with other government officials. In Maskwacis, the former school where Francis is visiting has been replaced with a school system operated by the four local Cree nations. The curriculum affirms the Indigenous culture that was once suppressed.

Chief Greg Desjarlais of the Frog Lake First Nation in northern Alberta, a school survivor, said after the pope’s arrival Sunday that there are “mixed emotions across this country” over his visit. “I think today of the young people that didn’t make it home and are buried around residential schools,” he told a news conference after the airport welcome ceremony. But he expressed optimism that the visit can begin to bring reconciliation.

“I do know when two people have apologized we feel better,” he said. “But our people have been through a lot. … Our people have been traumatized. Some of them didn’t make it home. Now I hope the world will see why our people are so hurt.” On Monday afternoon, Francis is scheduled to visit Sacred Heart Church of the First Peoples, a Catholic parish in Edmonton oriented toward Indigenous people and culture. The church, whose sanctuary was dedicated last week after being restored from a fire, incorporates Indigenous language and customs in liturgy.
“I never in my life thought I would see a pope here at Sacred Heart Chu …