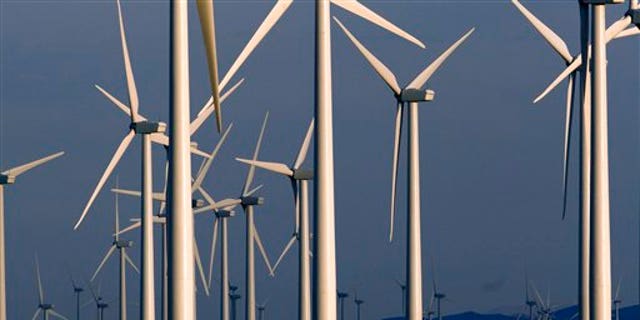 NEWYou can now listen to Fox News articles!
Every area of the U.S. could be in danger of experiencing power outages this summer amid a push to convert to renewable energy sources while taking traditional sources of power offline.”I think the entire country is incredibly vulnerable, because the entire country is facing a huge energy shortage and I don’t think there is any place that is truly safe,” Daniel Turner, founder and executive director at Power the Future, told Fox News.
A wind farm in Glenrock, Wyoming.
(AP)At issue are blackouts that could become widespread across the country this summer as grid operators struggle to meet the increased demand, a problem that has plagued some states for years but now could threaten much of the country.Turner said some states are under increased threat this year, especially those that have made political pushes to switch over to so-called sources of “green energy.”RENEWABLE ENERGY DEPENDENCE COULD LEAD TO ROLLING BLACKOUTS IN MICHIGAN THIS SUMMER”The areas of the country I’d be most concerned about are the ones that already have inherent weaknesses,” Turner said. “Texas, California, New Mexico, New York, all of New England. These are areas whose policies and political decisions have weakened their electric grid.”The potential outages come as many states have moved to quickly take plants that produce traditional sources of energy such as coal and natural gas offline and switch production over to renewable energy sources, which currently do not have the capacity to keep up with the demand of a hot summer.Part of the issue with renewable sources of energy such as wind and solar is that it is dependent on variables outside human control, with some areas not having enough wind or sunshine to continuously produce power. Batteries are in development that could help store excess energy production for later use, but the technology is currently expensive and not fully developed.That could force grid operators into tough decisions to maintain the integrity of the overall electric grid when demand picks up, but Turner argues that the move to renewable energy is a mistake altogether.TEXAS POWER GRID OPERATOR URGES RESIDENTS TO CONSERVE ENERGY AS PLANTS GO OFFLINEThe Midwest is particularly vulnerable this summer, even though it has for decades been more immune to the rolling blackouts and brownouts that typically plague the West.Regulators in Illinois have warned of controlled outages that could occur this summer, with one electric company sending a warning letter to customers during potential heatwaves.”A recent generation capacity auction has revealed that the Midwest could fall short of needed generation capacity to serve the summer peak load under certain conditions,” SouthEastern Illinois Electrical Cooperative said in the letter. “In the event that this happens, your Cooperative would be directed to disconnect a portion of the load in order to prevent an electric grid failure.”Critics have blamed the potential shortages on Illinois Gov. Jay Pritzker’s vow to move the state to 100% renewable energy by 2045, which has caused investment in traditional sources of energy generation to plummet.”If you look at any country worldwide, or any state in America, that has pushed green …