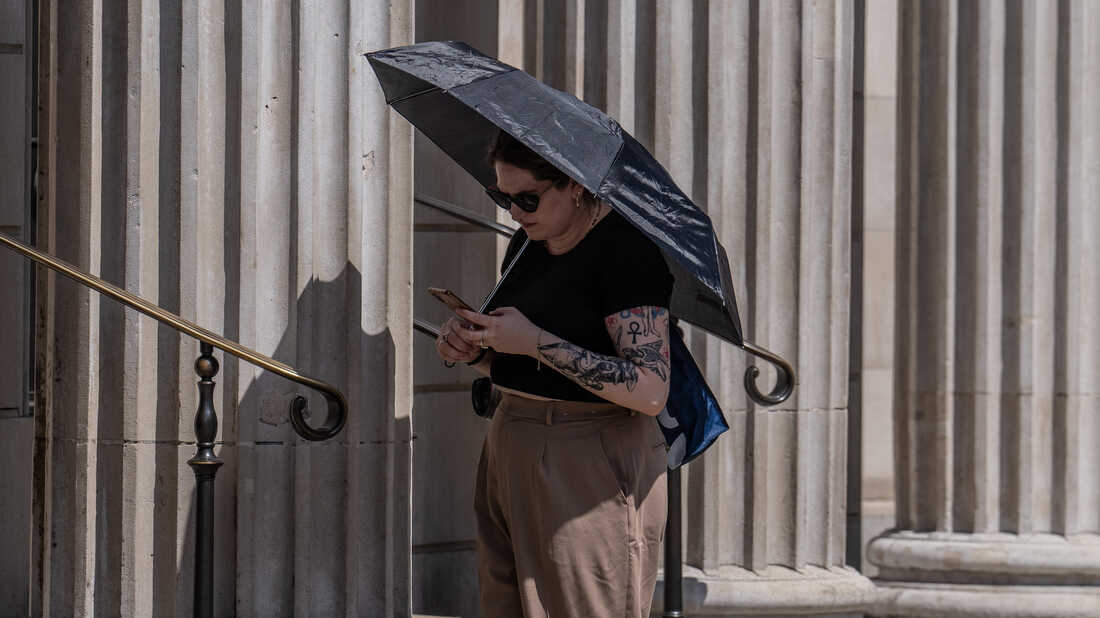 A woman shelters from the sun under a dark umbrella in London on Monday. Temperatures are forecast to hit well over 100 degrees in parts of the U.K. on Monday and Tuesday.

The U.K.’s first-ever red warning for extreme heat is in effect for the heart of England on Monday and Tuesday, with temperatures up to about 106 degrees predicted to roast an area from London all the way north to Manchester and York. “I think it’s the Devil’s armpits outside already in Manchester at 32c [89.6 Fahrenheit],” a Twitter user wrote around 1 p.m. local time, in response to a post from the U.K.’s national weather service, the Met Office.

Other commenters posted images showing the inventive measures they’ve taken to survive the heat, including hanging white sheets outside their house to cover sunny windows. Another person covered south-facing windows with silvery foil blankets, hoping to create at least one cool room in their home. The new weather alert system was put in place last year, in response to the rising dangers of extreme heat. The current red level constitutes a national emergency, with the worst heat expected on Tuesday.
It might look a little silly, but by closing the windows and curtains and also hanging up sheets on the sunny side we are so far managing to keep the house 8 degrees cooler inside than out. pic.twitter.com/CmVcoQHsI4— Sarah (@Sarah_Hants) July 18, 2022

The heat is poised to break weather records (again) If forecasts bear out, the heat would obliterate current U.K. records: The hottest temperature ever recorded there came three summers ago, when a spot in Cambridge hit 38.7 degrees Celsius (101.66 Fahrenheit).

Here’s how the BBC put it in context: “London is set to be one of the hottest places in the world on Monday, with temperatures soaring above the Western Sahara and the Caribbean.” Wales saw a new record high around 2 p.m. local time, when the mercury hit 35.3 Celsius (95.54 Fahrenheit), the Met Office said. Temperatures could also rise to new heights in Scotland.

A woman does a backflip into the River Cam in Cambridge, England, on Monday, the first of two days on which temperatures are expected to hit record highs.

The heat is part of a wave of dry, hot and sunny weather in Europe that has resulted in deaths and fueled exp …