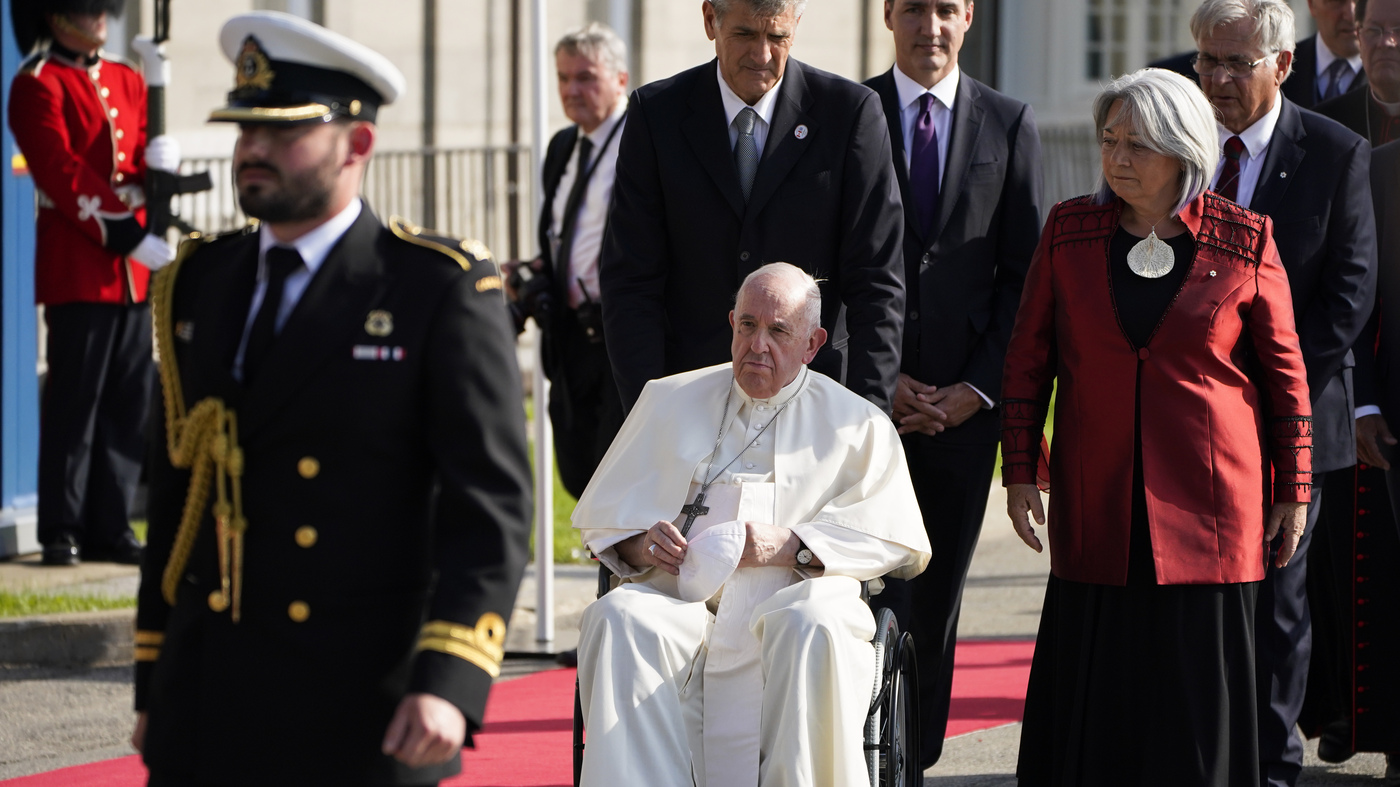 QUEBEC CITY — The Canadian government made clear Wednesday that Pope Francis’ apology to Indigenous peoples for abuses in the country’s church-run residential schools didn’t go far enough, suggesting that reconciliation over the fraught history is still very much a work in progress. The official government reaction came as Francis arrived in Quebec City for meetings with Prime Minister Justin Trudeau and Governor General Mary Simon at her Quebec residence, the hilltop Citadelle fortress, on the second leg of Francis’ week-long visit to Canada. The government’s criticisms echo those of some survivors and concern Francis’ omission of any reference to the sexual abuse suffered by Indigenous children in the schools, as well as his original reluctance to name the Catholic Church as an institution bearing responsibility. Francis has said he is on a “penitential pilgrimage” to atone for the church’s role in the residential school system, in which generations of Indigenous children were forcibly removed from their homes and forced to attend church-run, government-funded boarding schools t o assimilate them into Christian, Canadian society. The Canadian government has said physical and sexual abuse were rampant at the schools, with students beaten for speaking their native languages.

Francis on Monday apologized for the “evil” of church personnel who worked in the schools and the “catastrophic” effect of the school system on Indigenous families. In a speech before government authorities Wednesday, Francis apologized anew and blasted the school system as “deplorable.” Francis noted that the school system was “promoted by the governmental authorities at the time” as part of a policy of assimilation and enfranchisement. But responding to criticism, he added that “local Catholic institutions had a part” in implementing that policy. Indigenous peoples have long demanded that the pope assume responsibility not just for abuses committed by individual Catholic priests and religious orders, but for the Catholic Church’s institutional support of the assimilation policy and the papacy’s 15th century religious justification for European colonial expansion to spread Christianity. More than 150,000 Native children in Canada were taken from their homes from the 19th century until the 1970s and placed in the schools in an effort to isolate them from the influence of their families and culture. Trudeau, a Catholic whose father, Pierre Trudeau, was prime minister while the last residential schools were in operation, insisted that the Catholic Church as an institution bore blame and needed to do more to atone.
Speaking before Francis, he noted that Canada’s Truth and Reconciliation Commission in 2015 had called for a papal apology to be delivered on Canadian soil, but that Francis’ visit “would not have been possible without the courage and perseverance” of survivors of First Nations, Inuit and Metis who travelled to the Vatican last spring to press their case for an apology. “Apologies for the role that the Roman Catholic Church, as an institution, played in the mistreatment on the spiritual, cultural, emotional, physical and sexual abuse that Indigenous children suffered in residential schools run by the church,” Trudeau said. The Canadian government has apologized for its role in the school legacy. Former Prime Minister Stephen Harper issued a formal apology over the residential schools in Parliament in 2008, calling them a sad chapter in Canadian history and saying the policy of forced assimilation caused great harm. As part of a settlement of a lawsuit involving the government, churches and the approximately 90,000 surviving students, Canada paid reparations that amounted to billions of dollars being transferred to Indigenous communities. The Catholic Church, for its part, has paid over $50 million and intends to add $30 million more over the next five years. Trudeau implied that much more needed to be done by the church, and that while Francis’ visit had “an enormous impact” on survivors, it was but a first …