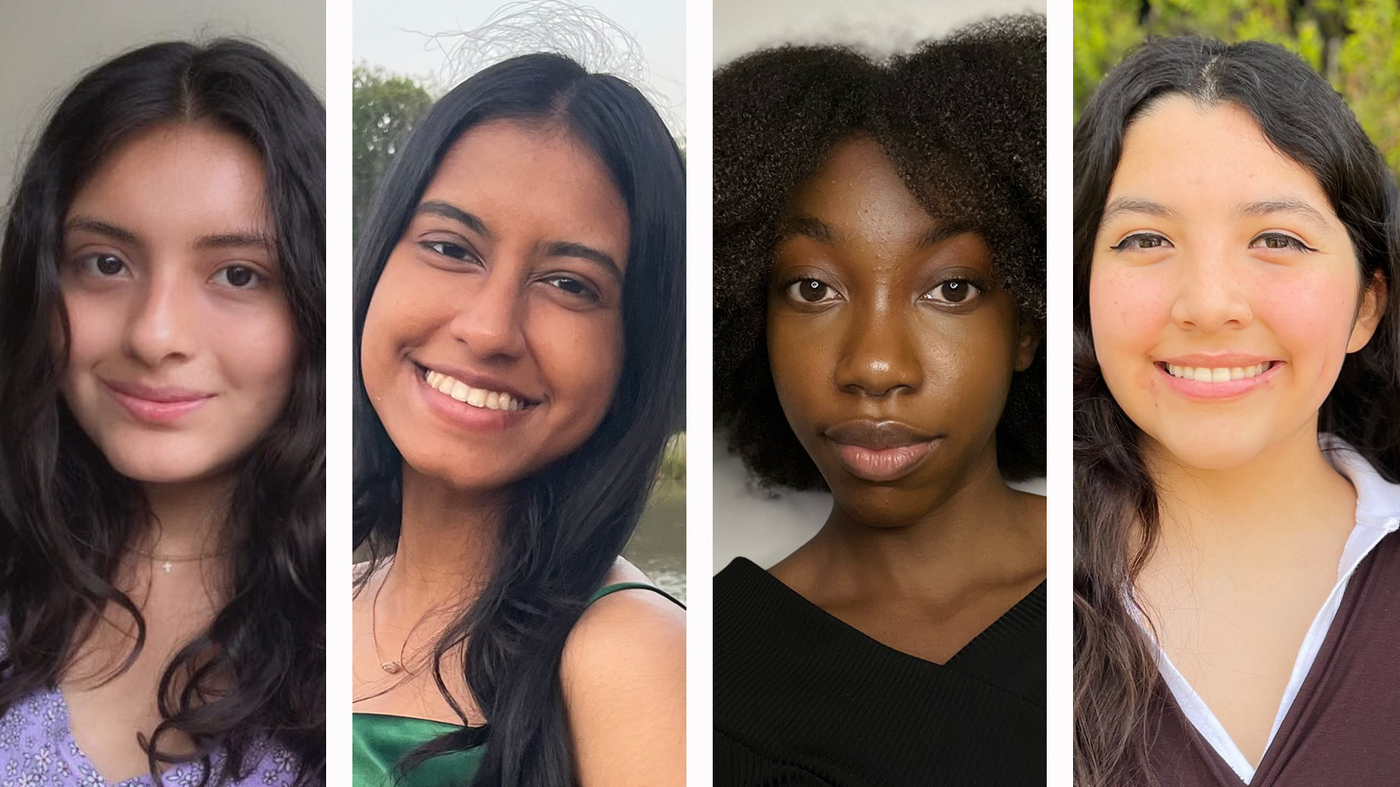 From left to right: Alice Paredes, Sriya Chippalthurty, Liliana Talino and Natalia Perez Morales are Girl Up “teen advisers” who give up their hobbies to help disadvantaged girls and women in their communities.

Alice Paredes loves to dance but she doesn’t have time for it anymore. Even though the 17-year-old from Lima, Peru, was a 4-time national champion in marinera, a traditional folk dance, she’s got other priorities on her mind. “Like saving the world, for instance,” she says. Well, maybe not the world – but certainly her community. When Alice was 15, she founded her own nonprofit organization called ConexEDU. Its goal is to help kids in rural areas get the funds they need to pursue a good education.

In July, Alice joined nearly 3,000 girl activists in 102 countries for the annual leadership summit hosted by Girl Up, a U.N. Foundation campaign to promote the rights of adolescent girls around the world. At this year’s two-day virtual event, girls attended workshops on topics such as sexual and reproductive rights, health and justice and cyberbullying — and panels with inspiring women like Oscar-winning filmmaker Chloé Zhao and WNBA champion Candace Parker. NPR spoke to Alice and three other Girl Up leaders – Natalia Perez Morales, 17, from Los Angeles; Sriya Chippalthurty, 17, from Houston; and Liliana Talino, 16, from Luanda, Angola – about their activism, their role models – and what they do for fun. The interviews have been edited for length and clarity.

What issue do you care most about? And how have you helped girls and women in your community? Alice: I’m most passionate about solving gender inequality in education. In 2020, I met Angelina, a sixth grader who lived in a rural area about 3 hours outside of Lima. She was the best student in her grade and dreamed of being a health-care worker, but her family couldn’t afford to buy her the technology she needed to take virtual classes [during the pandemic]. So my foundation raised about $500 to buy her a smartphone and a year of mobile data so she could attend online classes and do her homework. Sriya: I care a lot about period poverty [the lack of access to menstrual products and education] and reproductive rights. During the height of the pandemic, I helped organize a campaign to provide feminine products to women in homeless shelters. I could see the smiles on the faces of people as we were serving them. Natalia: I’m passionate about immigration reform. I am currently working on a letter-writing campaign advocating for immigrant women who [say they] have been sexually assaulted by U.S. Immigration and Customs Enforcement officers. Liliana: There are so many problems in my community, but Angola’s hunger crisis takes priority. People are dying from hunger [1.58 million people are experiencing food insecurity due to droughts and poor harvests]. Last year, I helped raise donations to help feed 35 families in Angola. We fed so many kids and made them happy, and that was really special.
Tell me about a woman you look up to for inspiration. Liliana: Tabata Amaral. She is a Brazilian politician and she’s really awesome. [When she was in high school], she represented Brazil in the International Science Olympiads in chemistry, astronomy and astrophysics — and then went to Harvard and became a politician [where she is currently a federal deputy for the Brazilian Socialist Party].

Alice: Chimamanda Ngozi Adichie. She’s a Nigerian author who has a book called We Should All Be Feminists. She says feminism isn’t just a woman’s fight. Men and women and everybody else have to join forces to fight inequality. Sriya: Emma Watson. I was a huge Harry Potter fan growing up, and then I found out that Watson was a U.N. Goodwill Ambassador and promoted education for girls in Zambia. She has a huge platform and uses that to promote causes she cares about. What else do you do to relax and have fun? Natalia: I love music, especially Alicia Keys and R&B. I also like watching crim …