Who is Viktor Bout, the prisoner the U.S. may trade for Brittany Griner? 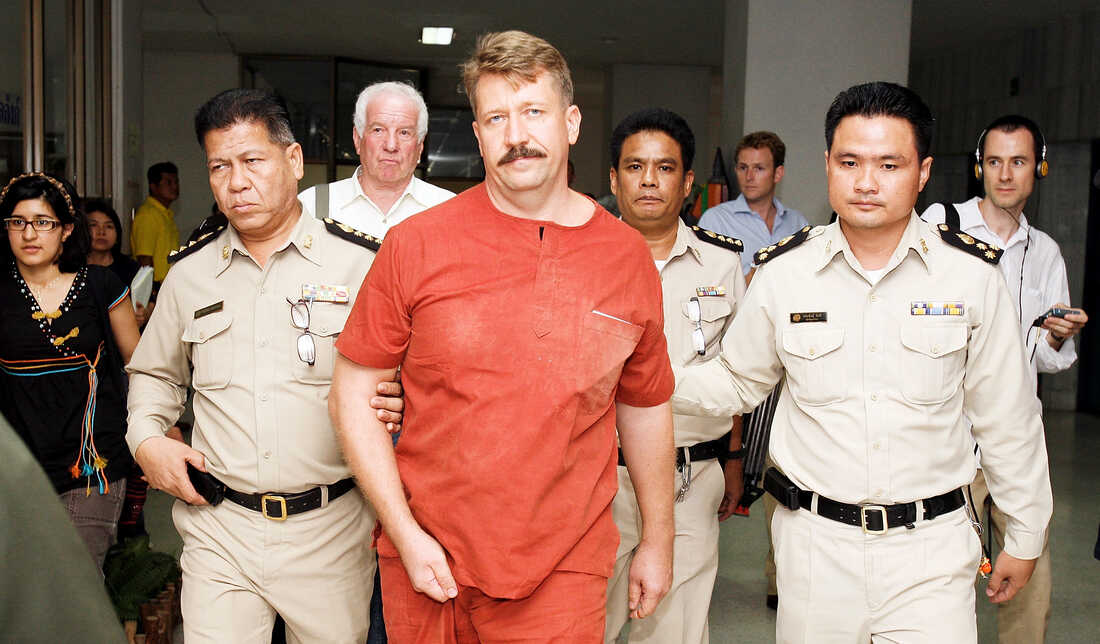 Russian arms dealer Viktor Bout is shown in custody in Bangkok, Thailand, in 2008. Bout was later extradited to the U.S. and convicted of conspiring to kill Americans. He’s serving a 25-year sentence, but he may be part of a prisoner swap the U.S. and Russia are trying to negotiate.

Where most people saw chaos, Viktor Bout saw opportunity. Bout, a 55-year-old Russian, was the world’s most notorious arms dealer before a U.S. court convicted him in 2011 and sent him to a prison in Illinois. He’s now the focus of a potential prisoner swap between the U.S. and Russia, which holds two Americans the Biden administration hopes to free. Bout was in his mid-20s when the Soviet Union fractured in 1991, leaving vast quantities of Soviet military hardware scattered across 15 newly minted countries. Most all of them were ill-equipped to pay their troops or keep track of the weapons they’d just inherited. Almost anything was available for a price.

Trained by the Soviet military as a linguist, Bout began acquiring Soviet military transport planes and loaded them up with weapons. The U.S. says he sold them all over the world — though primarily in Africa, the Middle East and Asia. He was entrepreneurial, not ideological, selling to governments that were fighting rebels, and to rebels who were fighting governments. Separating fact from fiction has often been difficult when documenting Bout’s work, but many reports said he even sold arms to both sides in the same conflict.

Bout always denied he was selling weapons, claiming he was flying flowers and frozen chickens to some of the world’s most violent places. He was always hard to pin down, but he lived openly in Moscow, traveled widely, occasionally spoke to reporters and seemed to welcome at least some of the attention. He became so notorious that Hollywood made a 2005 movie loosely based on his life, called the Lord of Death, starring Nicholas Cage. Despite facing international sanctions and threats of arrest, Bout managed to stay a step ahead of law enforcement until 2008, when he was captured in a sting operation in Thailand, organized by the U.S. Drug Enforcement Agency. The Thais extradited Bout to the U.S. two years later, where he was charged with conspiring to kill Americans. He was convicted in a Manhattan court in 2011, and is a little less than halfway through his 25-year sentence at a prison in Marion, Ill.

American basketball player Brittney Griner arrives in court outside Moscow on June 27. The U.S. says it’s working on a potential prisoner swap that would bring Griner back to the U.S. She’s acknowledged in court that she had hashish oil in her luggage when arriving at a Moscow airport.

The Kremlin’s angle So why would Russian leader Vladimir Putin want to bring Bout back? After all, he made his money selling weapons that had been intended for use by the Soviet Union’s military and successor countries. When CIA director William Burns was asked this question last week at the Aspen Security Forum, he said succinctly: “That’s a good question, because Viktor Bout’s a creep.”
Dan Hoffman, a former CIA officer who served in Russia, said Putin’s motives should be viewed through the lens of his ongoing battle with the U.S. “Every opportunity he gets, Vladimir Putin wants to show that he can go toe-to-toe with Russia’s main enemy,” Hoffman said. “It’s a real good public relations move for him to show that he’s taking care of his own.”

The U.S. and Russia have a history of working out deals to gain the return of their own citizens. In April, the U.S. released a Russian pilot convicted or conspiring to bring dru …