Why 100-degree heat is so dangerous in the United Kingdom 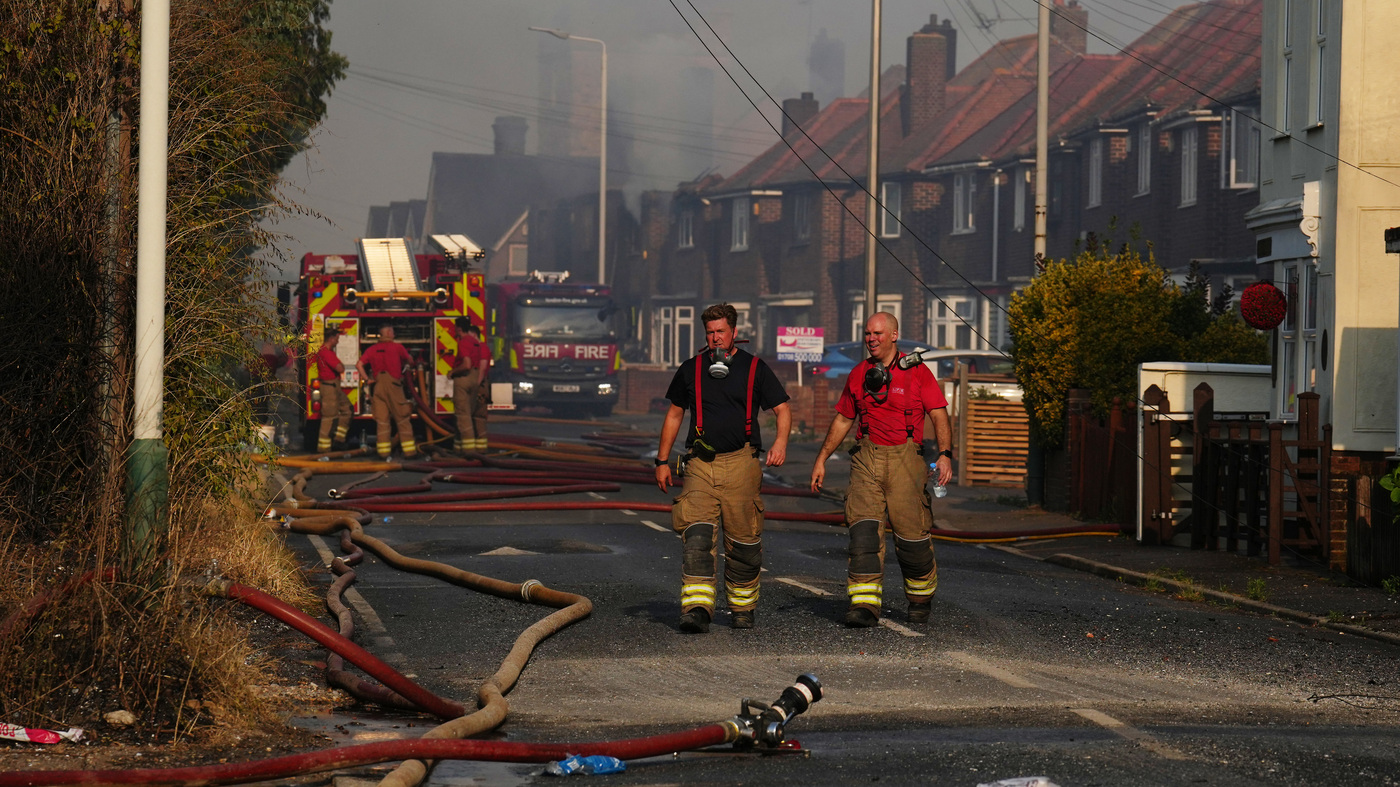 Residents of London enjoy some shade on Tuesday, as the United Kingdom recorded its hottest temperature ever.

This week, it was hotter than ever in the United Kingdom. On Tuesday, parts of England hit a temperature above 40 degrees Celsius – or 104 degrees Fahrenheit — a first in the U.K.’s recorded history. The government had urged Brits to stay home if possible. Train stations were shut or empty; an airport closed a runway and police closed a highway when asphalt melted and buckled. The mayor of London, Sadiq Khan, said the city’s fire brigade received 1,600 calls for assistance and that firefighters were fighting at least a dozen major fires across the city. Residents of Blidworth, a village near Nottingham, were evacuated as 15 fire crews battled an enormous blaze on a nearby farm. “I wasn’t expecting to see this in my career,” said Stephen Belcher, the chief scientist at the U.K.’s Meteorological Office.
Here’s a look at today’s provisional maximum temperatures at 16:00 👇#heatwave2022 #heatwave pic.twitter.com/A957lUFdOL— Met Office (@metoffice) July 19, 2022

With much of the U.S. facing its own heat wave, it could be easy for Americans to wonder why the extreme heat has been so disruptive in the U.K. In short: Because it’s not a common occurrence there, the country and its residents are less equipped to deal with heat, officials and experts say — even as climate change means extreme days are more likely in the years to come.

Why is the U.K. more vulnerable to heat than the U.S.? In parts of the U.S., temperatures above 100 degrees Fahrenheit are relatively common. In the South and Southwest, it’s normal to record triple-digit temperatures a dozen or more times each year. By contrast, temperatures as hot as those recorded Tuesday are typically expected in the U.K. once every 100 to 300 years, according to the Met Office.

Because of that, infrastructure in the U.K. — from homes to commercial buildings to roads to train tracks to airport tarmacs — isn’t always built to withstand the high temperatures. “It can be difficult for people to make the best decisions in these situations, because nothing in their life experience has led them to know what to expect,” Penny Endersby, the chief executive at the Met Office, said ahead of the heat wave. “Here in the U.K., we’re used to treating hot spells as a chance to go play in the sun. This is not that sort of weather. Our lifestyles and our infrastructure are not adapted to what is coming,” she added. For example, most homes in the U.K. don’t have air conditioning. The British government estimates that only about 5% of homes have any form of AC – and most of those that do have portable units designed to cool a single room. Meanwhile, nearly 90% of Americans have air conditioning in their homes.
How did that play out this week? It’s too soon to know how deadly this week’s heat wave has been. Experts had also warned that many people, potentially thousands, could die in connection with the extreme temperatures. (After a trio of heat waves rocked the U.K. in the summer of 2020, a government report concluded that the country saw 2,500 more deaths than expected during the heat, even after accounting for COVID-19.) More immediately apparent was the effect on infrastructure. Roads, tarmacs, and rail systems are more vulnerable in the U.K. than they are in the U.S.

Like many older roads in England, that stretch of the A14 was once paved with concrete, said National Highways, the government-owned company that operates the country’s highways. It had since been paved over with asphalt, but the underlying concrete could not handle this week’s heat. “In the extreme heat a cumulative effect has meant the temperature of the concrete under the asphalt has risen over recent days meaning sections have expanded and overwhelmed the tolerances (gaps) we allow for normal expansion,” they wrote.

Firefighters in Wennington, a parish near London. The mayor of London said emergency services had battled a dozen major fires on Tuesday.