Once a heavyweight champion, Kyiv’s mayor now fights the Russians 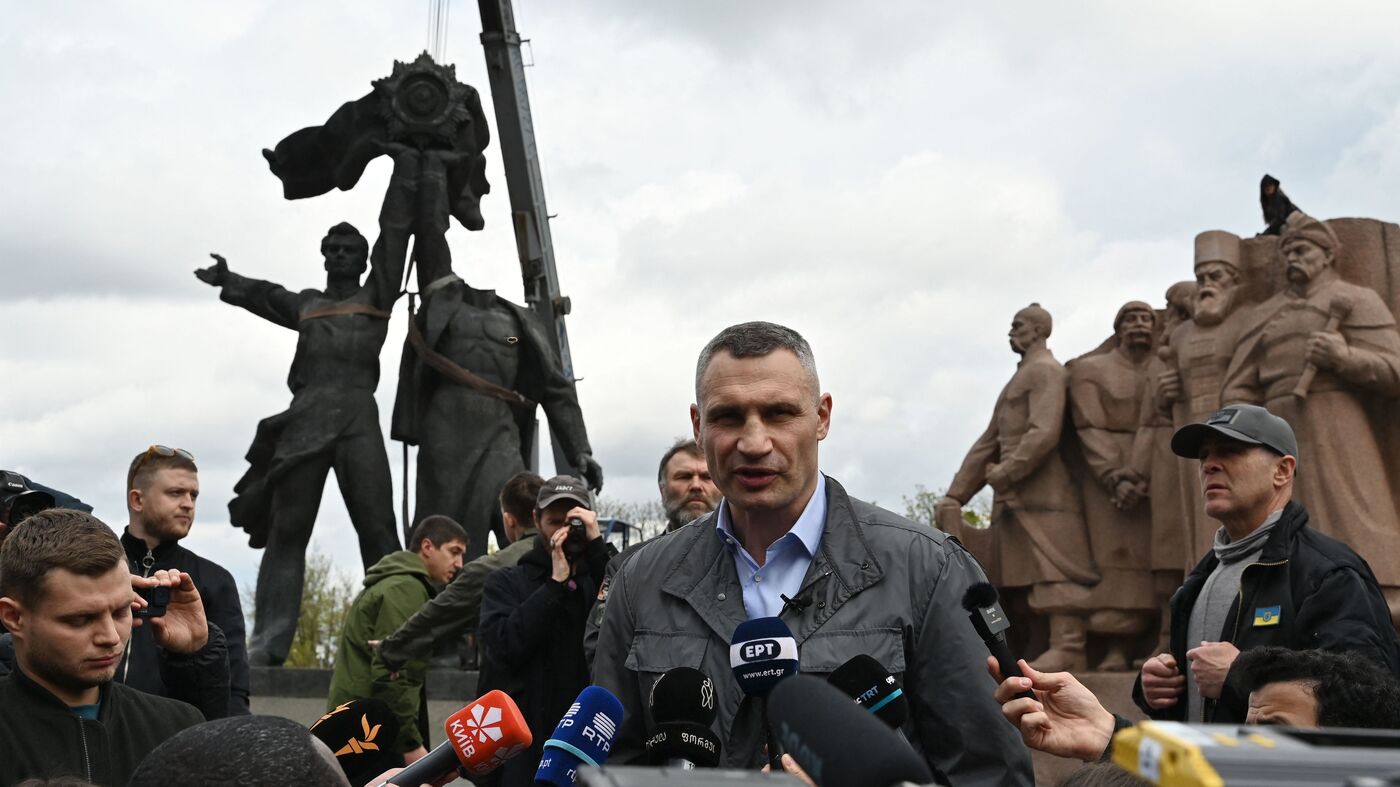 Kyiv Mayor Vitali Klitschko speaks in March in front of an apartment building that was shelled by Russian forces. Klitschko, a former world heavyweight boxing champion, has been mayor of Kyiv since 2014.

KYIV, Ukraine — If you want to challenge that old expression “you can’t fight city hall,” you should probably pick someplace besides Ukraine’s capital. That’s because the mayor’s previous job title was heavyweight champion of the world. Kyiv Mayor Vitali Klitschko held that title on and off from 1999 to 2013. Now, he’s fighting the Russians. Klitschko is quick to the scene when Russian airstrikes slam into the capital. “They killed children, women, civilians, for what reason?” Klitschko said as he arrived at an apartment building that was attacked in March. “Where’s the military target? Is this building a military target?”

The Russian invasion in February has transformed Ukraine’s President Volodymyr Zelenskyy from a leader with sagging popularity into one of the world’s most famous political figures. Yet before the war, Klitschko was better known globally, at least to boxing fans. The Russians reached the outskirts of the capital early in the war and had just retreated when Klitschko spoke to NPR in April. “Kyiv is the largest city in Eastern Europe. Right now, we guess half of the population (of 3.5 million) has already left,” Klitschko said. “The city’s changed totally. In the springtime, this city has energy. And right now, the city is almost dead.”

Now the capital is more relaxed The war is still raging in eastern and southern Ukraine. But in the capital, many residents who initially fled have come back and the city has in many ways regained a sense of normalcy. There are still soldiers in the streets, checkpoints on the edge of the city, and frequent air raid sirens. But the streets are full of cars and pedestrians, shops and restaurants are open, and the day-to-day atmosphere is generally relaxed. Even when the Russians were nearby, Klitschko never stopped working out of City Hall, a massive stone building in the center of Kyiv, surrounded by sandbags. He said in a recent interview with The Sunday Times that he’s left the city just twice since the war began.

World heavyweight champion Vitali Klitschko (right) celebrates his victory over Poland’s Tomasz Adamek in Poland in 2011. Klitschko’s brother, Wladimir Klitschko (left), was also a world champion as the two brothers dominated the heavyweight ranks for more than a decade. However, they kept a promise to their mother and never fought each other.

At age 51, Klitschko stands 6-foot-7 and still looks to be around his fighting weight of 250. When he retired nearly a decade ago, he’d won 45 professional bouts — 41 by knockout — and lost only twice. His nickname? Dr. Ironfist.In politics, he did lose his first bid for mayor. But he won the post in 2014 and was easily reelected in 2020. He generally gets good marks from citizens.

“He’s done a pretty good job and I’m very thankful for what he’s done so far,” said Dmytro Belov. Belov gives toy car rides to children at a park that Klitschko upgraded. The park — one of several renovated by the mayor — now has an elevated walkway with a commanding view overlooking the Dnipro River , which bisects the city. “These are beautiful parks. I think they’re the new calling card of the …