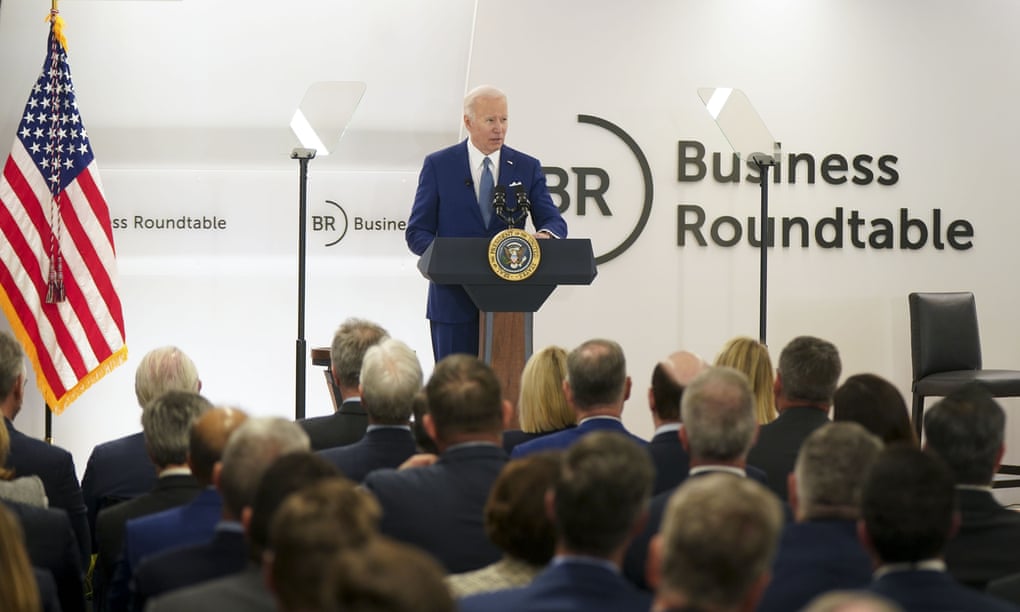 Top US business lobby promised climate action – but worked hard to block efforts President Joe Biden speaks while joining the Business Roundtable’s chief executive officer quarterly meeting in Washington, on 21 March. Photograph: Bloomberg/Getty ImagesPresident Joe Biden speaks while joining the Business Roundtable’s chief executive officer quarterly meeting in Washington, on 21 March. Photograph: Bloomberg/Getty ImagesThe Business Roundtable is spending liberally to weaken efforts that would enable investors to hold companies accountable for their climate promisesThree years ago today, in a statement that would be described as “historic”, “monumental” and “revolutionary”, America’s most powerful and politically connected corporations promised to “protect the environment by embracing sustainable practices across our businesses”.The “Statement on the Purpose of a Corporation” came from the Business Roundtable, an influential Washington DC lobbying group whose 200-plus members include the chief executives of some of the world’s biggest companies, including Apple, Pepsi, Walmart and Google.Today, on the statement’s third anniversary, the Business Roundtable and its member CEOs continue to issue earnest statements about the climate crisis. But the organization is also working diligently – and spending liberally – to weaken efforts that would enable investors to hold companies accountable for their climate promises.An analysis by the Guardian found the lobby group has worked hard to protect a status quo in which corporations:
Generate goodwill and positive PR by publishing bold climate goals, with little fear of being held accountable or legally liable for achieving those goals.
Can choose to selectively disclose certain parts of their carbon footprint, or none at all.
Are not required to reveal the greenhouse gas emissions generated throughout their supply chains – which, for most companies, make up the majority of their emissions.
Make high-profile pledges to fight climate change, while paying to maintain memberships in the Business Roundtable and other trade associations that spend millions of dollars to lobby governments against meaningful climate action.
In public the Business Roundtable’s leaders are still committed to change. Doug McMillon, the CEO of Walmart and previous chair of the Business Roundtable, has called the climate crisis “one of the greatest challenges facing the planet today”. In a statement on the group’s website, Mary Barra, the CEO of GM and the Roundtable’s current chair, declared that “we must act” to tackle climate change. “Meeting the scope of this challenge will require collective global action – business and government,” Barra said.The challenge “isn’t the lack of business commitment” said Johnson Controls CEO George Oliver in a video published by the Business Roundtable in January. “What we need is to be aligned with the public sector to make sure that we’ve got the proper policies in place that will enable us to do what we do so well.”Yet when the US government has tried to put the “proper policies” in place, the Business Roundtable has worked to undermine those efforts.In 2021, the organization spent millions of dollars to stop the Biden administration’s Build Back Better agenda, which included significant efforts to reduce carbon emissions and promote clean energy.And this year, after the US Securities and Exchange Commission (SEC) proposed a long-anticipated rule that would require publicly held companies to disclose their carbon emissions and the risks that climate change poses to their business models, the Business Roundtable declared its opposition to central aspects of the SEC proposal, including provisions that experts say are vital for the rule to give investors comparable and consistent information about corporations’ climate risks.BlackRock CEO Larry Fink said in a speech last year, ‘If we are really going to tackle this, if we want to have 100% participation, the easiest way you could do that is having unified standards.’ Photograph: Justin Lane/EPABefore releasing the proposed rules in March, the SEC had asked the public what such rules might look like. In its response, the Business Roundtable acknowledged that “climate challenges are creating growing risks in many parts of the economy” and deemed it “appropriate” for the SEC to regulate climate disclosures.The group noted that the present system of corporate climate reporting, in which some companies issue voluntary climate-related disclosures, has proven inadequate. “There are many conflicting demands on companies to provide disclosures under different frameworks, which is unnecessarily costly and time-consuming for companies,” the Business Roundtable’s comments read.But wh …