Trump University Founder Dares To Rail About Students Getting ‘Fleeced’ 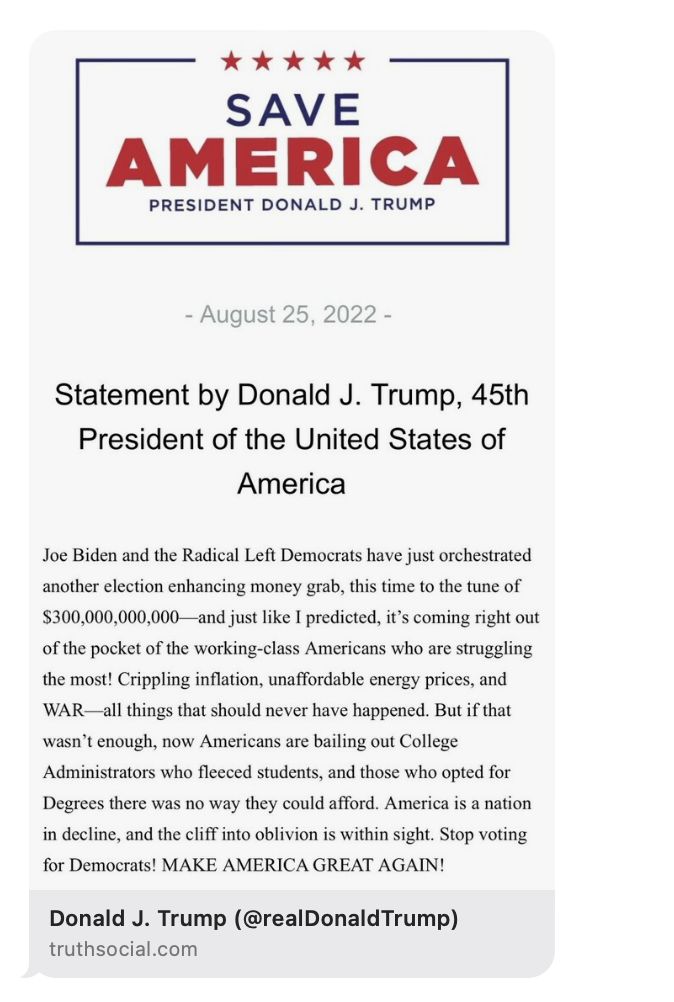 Trump University founder Donald Trump railed in a post on his Truth Social platform Thursday about college administrators who “fleeced” students — part of his attack on President Joe Biden’s student loan forgiveness program.Trump failed to mention that he paid $25 million in 2016 to settle three fraud lawsuits filed on behalf of customers who paid as much as $35,000 each to attend his own Trump University, which was never accredited as a university and didn’t provide any legitimate college degree.AdvertisementEric Schneiderman, New York’s attorney general at the time, said in a statement then concerning one of the suits, “My office sued Donald Trump for swindling thousands of innocent Americans out of ​millions of dollars through a scheme known at Trump University.” Another attorney said the settlement covered just 55% of the damages suffered by the students. The suits alleged that Trump University’s real estate seminar program used false advertising and deceptive business practices.Biden announced Wednesday that the U.S. Department of Education would cancel $10,000 to $20,000 in student loan debt for millions of people.Trump claimed in his social media post that the student loan forgiveness program is somehow bailing out “college Administrators who fleeced students, and those who opted for degrees there was no way they could afford.”Screenshot from Donald Trump’s Truth Social accountAdvertisementCheryl Lankford, a military widow from San Antonio, knows all about that. She spent money she really couldn’t afford on a Trump University “degree” that she hoped would help her and her family. She quickly realized the program wasn’t what was promised and tried in vain to get her $35,000 back. (See the video up top.)“By conning me out of the money the military gave me after my husband died, I felt like Trump University was dishonoring Jonathan’s memory,” Lankford said in an address at the Democratic National Convention in 2016.Critics on Twitter nearly choked at the reactions from Trump and his son Donald Trump Jr. (Some negative comments even managed to make it onto Truth Social.) The gagging began in responses Wednesday when irony-challenged Trump Jr. bashed “worthless” degrees in his attack on Biden’s program.The Repulsican RANT over student debt forgiveness shines a light on their thoughts about higher ed for all.Might be a good time for a reminder that Trump University was part of 3 lawsuits that resulted in a $25M settlement. GQP, how about that for higher ed?#FreshWords— RC RESISTER 🌊🌊🇺🇦 🇺🇦 🇺🇦 (@reneeaclay) August 25, 2022

Don Jr. cries about colleges’ “worthless degrees”?Trump University was not a university or even a licensed school at all — but it made fake “diplomas” for its students after they paid up to $35,000 a piece in “tuition.”— Tristan Snell (@TristanSnell) August 25, 2022

Remember in 2016 when Trump “University” agreed to pay a $25 million settlement (two class-actions and a fraud case) for defrauding its students? Sit down, Jr. pic.twitter.com/XpMC5RjSkT— Gabe Sanchez  (@iamgabesanchez) August 25, 2022

Hey Junior, do you remember when your father had to pay a $25 million dollar fine for his corrupt and fraudulent Trump University?Good times, am I right?https://t.co/YJQRXY5Vdy— TeddManII🌊 (@teddmanii) August 24, 2022