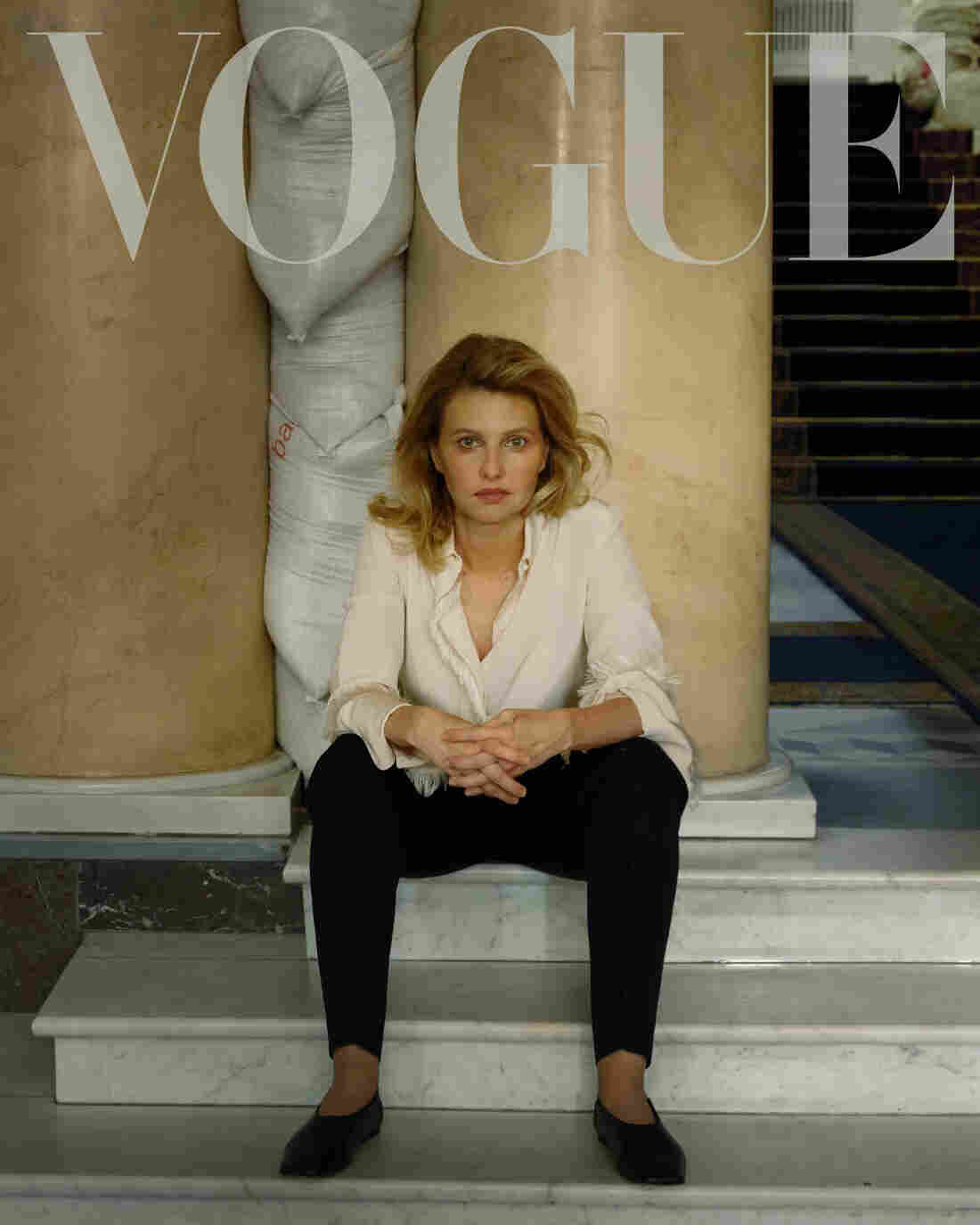 Ukrainian first lady Olena Zelenska on the front cover of Vogue, photographed by Annie Leibovitz. Entitled “Portrait of Bravery,” the spread and accompanying interview paint Zelenska as a woman stepping up to the challenge of her many roles in this war.

LVIV, Ukraine — What does it mean to “sit like a girl”? The question arose after Ukrainian first lady Olena Zelenska appeared sitting on the cover of Vogue last month. Some critics ridiculed her pose as not being feminine. In the portrait, made by famed photographer Annie Leibovitz in Kyiv, Zelenska is dressed in pants and a shirt with rolled up sleeves, wearing flats and minimal makeup. She’s seated on marble steps, leaning in with her elbows on her knees — her legs not zipped together.
“We have no doubt we will prevail.” As the war in Ukraine enters a critical new phase, the country’s First Lady, Olena Zelenska, has become a key player—a frontline diplomat and the face of her nation’s emotional toll. https://t.co/DCXWYnzAsK pic.twitter.com/wcaY5IFGHf— Vogue Magazine (@voguemagazine) July 26, 2022

“‘Sit like a girl,’ ” Polina Karabach, a 30-year-old resident of Kyiv, recalls reading online while scrolling through a deluge of criticism. “[They say] it’s inappropriate for the first lady, it’s inappropriate for women to sit like this.” Karabach believes that Zelenska sent an important message by showing up in the magazine: that even though Ukrainians are tired, they are “still standing strong.” So she was taken aback when so much criticism, including from fellow Ukrainians, focused on the first lady’s appearance. Her hair? Too glamorous for wartime.

Her eyes? Too tired-looking. Her posture? Too manly. The media may have noted President Volodymyr Zelenskyy looking worn-out since the war. But few people criticize him when he’s in the press, Karabach says, so the backlash against his wife is “a sign that it’s really about trying to humble down women and Olena, specifically.” Critics took issue with all sorts of aspects Zelenska’s photoshoot has garnered other sorts of criticism, including from fellow Ukrainians who have accused her of stealing the spotlight from women actually working on the front lines, and of promoting a cult of personality in the West around President Zelenskyy. He appears embracing or holding hands with his wife in some of the photos. Meanwhile, outside of Ukraine, the photo shoot has also drawn criticism as war propaganda and making light of the conflict. “Is the magazine romanticizing war, or is the first lady weaponizing glossies?” asked a critic’s notebook piece in The New York Times. Peter Dickinson, the editor of the Atlantic Council’s UkraineAlert service who runs a publishing business in Ukraine, says most of the criticism seems to be coming from Russia, Russian proxies and people critical of their government’s support of Ukraine in countries like the United States, the United Kingdom, Germany and Italy.
“I think it was a good opportunity for people who are critical of the overwhelming support for Ukraine, to shout to Ukraine and say, ‘Look, this country doesn’t need our help, they’re doing Vogue photo shoots, they don’t need help, they don’t need support,'” Dickinson says. Republican congresswoman Lauren Boebert shouted exactly that. While the U.S. is sending billions of aid to Ukraine, she tweeted, “Zelenskyy is doing photoshoots for Vogue Magazine. These people think we are nothing but a bunch of suckers.” Jalisa Danielle, a Houston-based podcaster, also voiced skep …