A Texas town gets its portrait on a silo 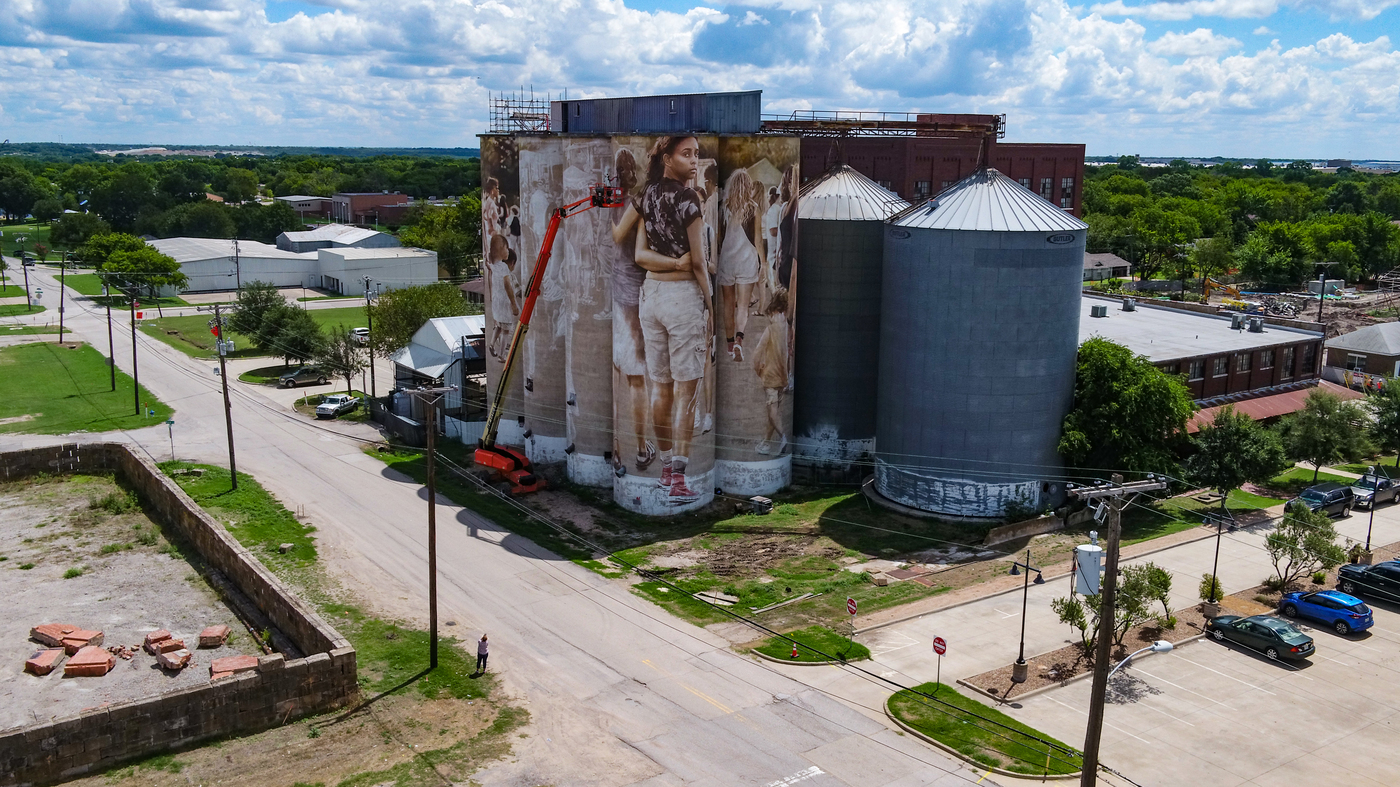 I’ve always liked silos. Exotic, to this Manhattanite. But artist Guido van Helten is obsessed with them. He’s made them canvases for giant murals in Iowa, Arkansas, Finland, Jordan, Denmark and his native Australia. He often turns to old, abandoned silos in small towns. The latest — in McKinney, Texas — stored grain once. Now, the silo’s eight canisters introduce passers-by (and locals) to the spirit and people of the place. Van Helten starts by interviewing and photographing residents. “I meet people, try to get a bit of character of the place.” He sorts through hundreds of black and white photos, “seeing which ones will fit the space.” And then he chooses maybe 20 pictures, and combines parts of them, to paint on a 90-foot high silo. Photos of his project prompt thoughts about silos. They’re landmarks. They stand for safe-keeping, sustenance, security. They’re storing the future. And by painting some with strong, evocative images, he’s made them literal signs of home. Van Helten’s Texas mural shows several McKinneyans at a town celebration of Juneteenth. “People interacting,” he says, “and moving and walking. It shows layers.”

A major figure is a pretty young African American woman, an arm behind her back, looking over her shoulder at viewers. It’s an unselfconscious look. She’s comfortable where she stands.

The muralist has themes for his silo art: public housing, education, desegregation. For McKinney the theme is “Community.” The town is changing. Its population jumped from 35,000 to 210,000 in just a few years. Mostly Republican, with lots of civic pride. It sits some 30 miles from Dallas, off Highway 5 — once the main way to go north or south. Mayor George Fuller and other town leaders think the silos could bring together McKinney’s white, Black and Hispanic population. And attract tourists. “We saw this as a tremendous opportunity” the mayor says.

McKinney’s economy is diverse: it includes Raytheon, a big copper wire company, hospitals, tech. Plus a proud history of production. There once was a flour mill, a cotton mill. “We were the lollipop capital,” Mayor Fuller points out, with pride. “We were the blue jean capital of the world at one point.” More Mayoral pride. “We’ve done it all here in McKinney, Texas.” In the historic downtown n …