Anti-royal protesters are being arrested in the U.K. as the ‘Not My King’ tag grows 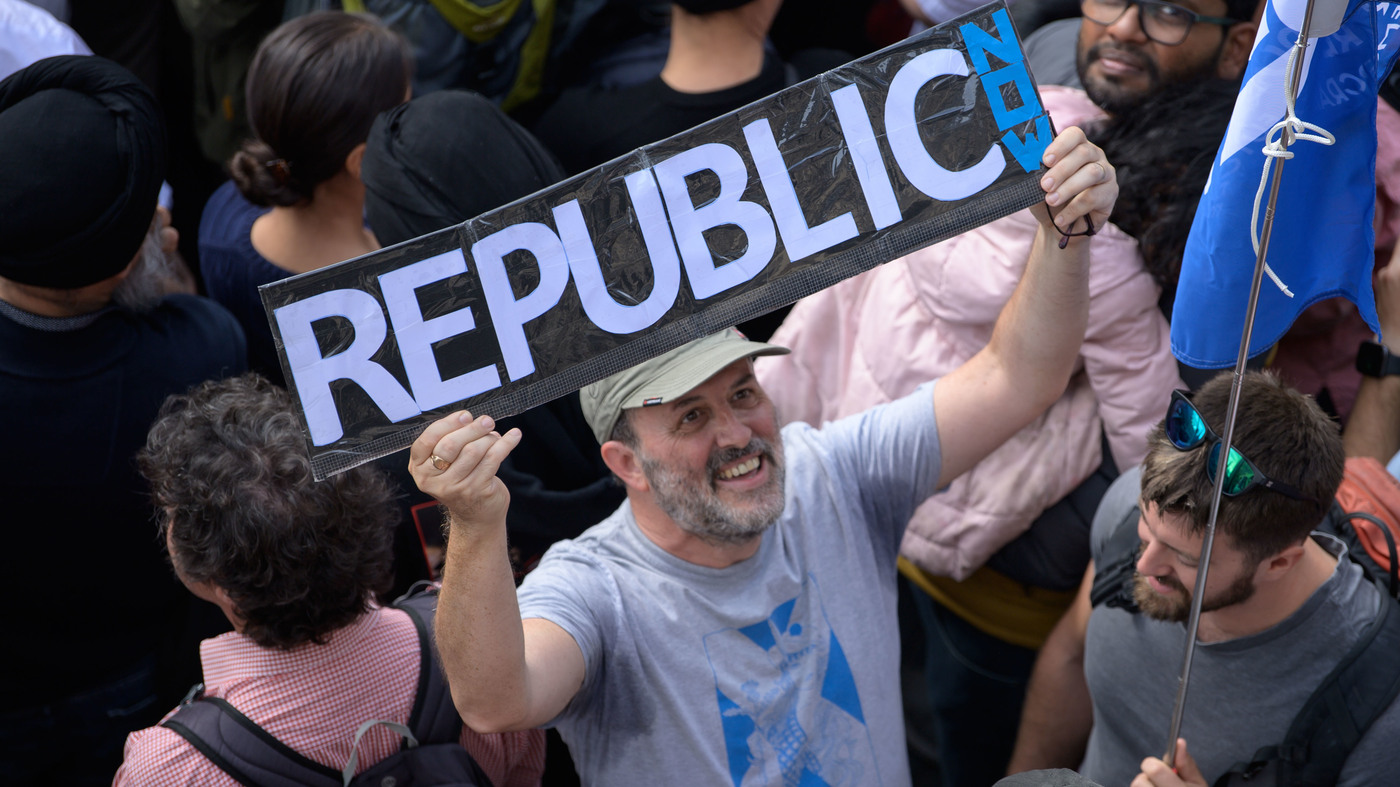 An anti-monarchy demonstrator protests outside Palace of Westminster in central London on Monday. A number of arrests in the U.K. are sparking questions about freedom of speech.

“Not my king.” “He is and there is nothing you can do about it.” That exchange between two commenters on Twitter encapsulates the current friction in the United Kingdom, where King Charles III’s ascension to the throne has sparked anti-royalist protests. In dramatic ways, the dynamic is playing out in real life: police have made a series of arrests against people protesting the monarchy in recent days, raising questions about the right to freedom of speech as the U.K. proclaims a new head of state to replace the late Queen Elizabeth II. Police in Scotland allege breaches of peace In widely seen photos, a woman holding a sign reading “Abolish monarchy” and “F*** imperialism” was arrested on Sunday at St. Giles’ Cathedral in Edinburgh, where the queen’s body is to lie at rest until Tuesday. “Let her go! It’s free speech!” one man shouted, according to The Scotsman newspaper. Others yelled back, “Have some respect.”

The woman, 22, was arrested “in connection with a breach of the peace,” a Police Scotland spokesperson told NPR, adding that she was formally charged and released, and her case is now pending at Edinburgh Sheriff Court. Similar reports emerged Monday, including one case involving a man who was seen being forcibly removed from a parade barrier after shouting at the royal procession leading to the cathedral. He was reportedly heckling Prince Andrew.
Prince Andrew heckled as the Queen’s coffin passes pic.twitter.com/85m9jUgszF— Christopher Marshall (@chrismarshll) September 12, 2022

And in London, a woman was led away by four uniformed officers on Monday after holding up a sign reading “Not my king” — which has become a trending hashtag — near Westminster Hall.
🔴An anti-Royal protestor holding a poster with the slogan ‘Not my king’ has been pictured being led away by police 👇 pic.twitter.com/qsur4TT6vz— Evening Standard (@standardnews) September 12, 2022

Protester says he didn’t disrespect the late queen The most high-profile case comes from Oxford, where author and activist Symon Hill says he was arrested for protesting Charles’ ascension, in what he called “an outrageous assault on democracy.” Hill said he objected only to Charles being proclaimed king, and that he didn’t do anything to disrespect Elizabeth or disrupt those mourning her. “It was only when they declared Charles to be ‘King Charles III’ that I called out ‘Who elected him?'” Hill said as he related his experience. “I doubt most of the people in the crowd even heard me. Two or three people near me told me to shut up.”
The U.K. adopted new laws on protests this year Hill said police initially told him he was arrested under the U.K.’s recently toughened laws on protests, a change that came after advocacy groups such as Extinction Rebellion and Black Lives Matter mounted large and/or disruptive protests in recent years. The new law allows police to act in cases which they deem to be “unjustifiably noisy protests that may have a significant impact on others” or seriously disrupt an organization’s activities.

A demonstrator against the U.K.’s royal head of state holds a sign reading “Republic Now” at an accession proclamation ceremony for King Charles III in Edinburgh, Scotland.

The arrests highlight individuals’ troubles with the authorities — but large groups have also chosen or been forced to change their plans due to Elizabeth’s death. Extinction Rebellion had for months planned to hold a large protest in London this past weekend, dubbed the Festival of Resistance. …