Argentina’ vice president is threatened by a man wielding a handgun 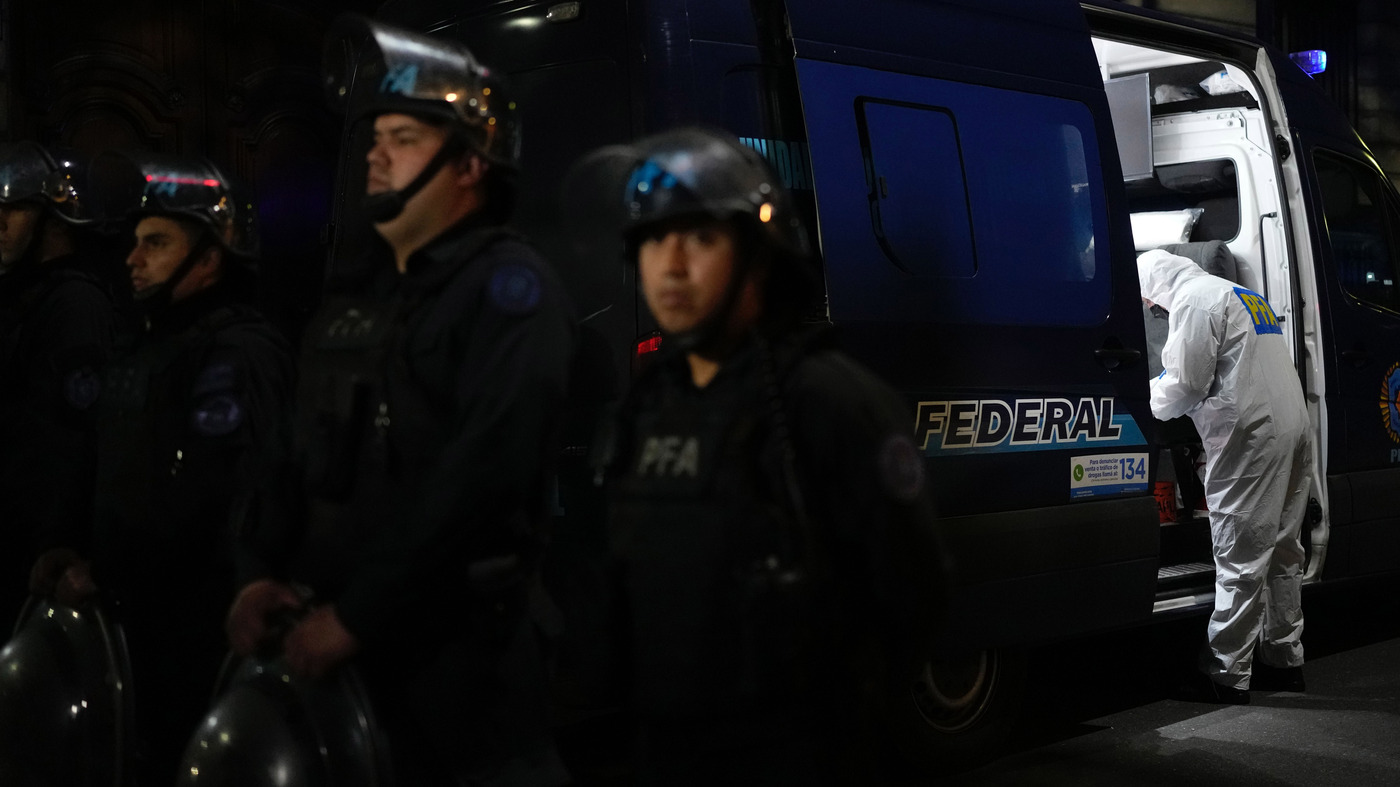 A police investigator works in his van at the scene where a man pointed a gun at Argentina’s Vice President Cristina Fernandez during an event in front of her home in Buenos Aires, Argentina, Sept. 1, 2022.

BUENOS AIRES, Argentina — A man tried to kill Argentina’s politically powerful Vice President Cristina Fernández outside her home, but the handgun misfired, the country’s president said. The man was quickly overpowered by her security officers in the incident Thursday night, officials said. President Alberto Fernández, who is not related to the vice president, a former president herself, said the pistol did not discharge when the man tried to fire it. “A man pointed a firearm at her head and pulled the trigger,” the president said in a national broadcast following the incident. He said the firearm was loaded with five bullets but “didn’t fire even though the trigger was pulled.”

The vice president did not appear to have suffered any injury, and the man was overpowered within seconds as he stood among a crowd of her supporters. Gina De Bai, a witness who was near the vice president during the incident, told The Associated Press she heard “the sound of the trigger being pulled.” She said she didn’t realize it was a handgun until the man was rushed by security personnel. President Fernández called it “the most serious incident since we recovered democracy” in 1983 after a military dictatorship and urged political leaders, and society at large, to repudiate the attempted shooting.

The attack came as the vice president is facing a trial for alleged acts of corruption during her 2007-2015 presidency — charges that she vehemently denies and that have led her supporters to surround her home in the upscale Recoleta neighborhood of Argentina’s capital. Video broadcast on local television channels showed Fernández exiting her vehicle surrounded by supporters when a man is seen extending his hand with what looks like a pistol. The vice president ducks as people around the apparent gunman appear shocked at what is happening. Unverified video posted on social media shows the pistol almost touched Fernández’s face. The alleged gunman was identified as Fernando André Sabag Montiel, a Brazilian citizen, said an official at the Security Ministry, who spoke on condition of anonymity. He does not have a criminal record, the official said. ading that the weapon was a .32-caliber Bersa. The president declared Friday a holiday “so the Argentine people can, in peace and harmony, express itself in defense of life, democracy and in solidarity with our vice president.” Supporters of the vice president have been gathering in the streets surrounding her home since last week, when a prosecutor called for a 12-year sentence for Fernández as well as a life-long prohibition in holding public office in the corruption case.
Shortly after the incident, government officials were quick to decry what they called an assassination attempt. “When hate and violence are imposed over the debate of ideas, societies are destroyed and generate situations like the one seen today: an assassination attempt,” Economy Minister Sergio Massa said. Cabinet ministers issued a news release saying they “energetically condemn the attempted homicide” of the vice president. “What happened tonight is of extreme gravity and threatens democracy, institutions …