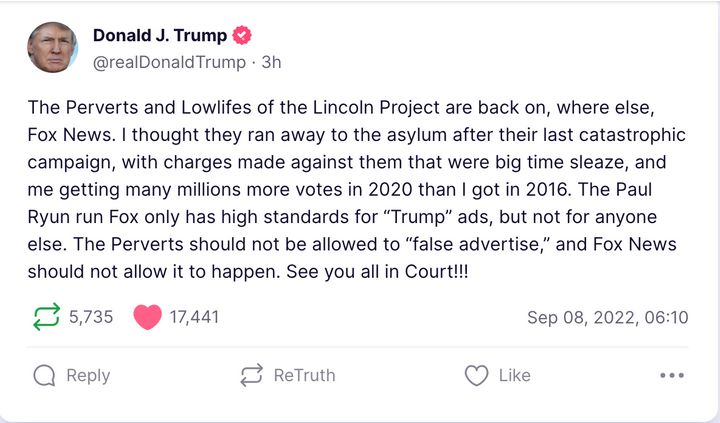 Donald Trump threatened Fox News on Thursday and it wasn’t with a good time.The former president announced on his reportedly financially-challenged Truth Social platform that he is considering suing the news network for false advertising after it broadcast an insulting, humiliating ad from the Lincoln Project.The ad in question is titled “SUCKER,” and basically explains to MAGA Republicans why they are suckers for believing basically anything Trump told them:Advertisement “Dear MAGA, we have some bad news. No, not that he lost. Not that your little coup attempt failed and its planners and the attackers are going to jail. No. The really bad news is why Trump told you he lost. Why he set it up way before the 2020 election. It wasn’t voter fraud but it was fraud. “Trump told you the election was stolen ripped you off, to sucker you, to take your hard-earned money and shovel it into his pockets. He spent it on himself not to take back the White House. “It was the biggest scam in political history. Every dollar you sent him paid to keep his shady business empire and lavish lifestyle going. It was a sucker game all along. And you know who the sucker is? You.” The ad copy may address “MAGA Republicans,” but the Lincoln Project intentionally targets Trump, purchasing local ad time on Fox News in Bedminster, New Jersey, where the former president spends the warmer winter months, according to Mediaite.The commercial was designed specifically to piss off Trump, and it apparently succeeded based on the rant he unleashed on Truth Social Wednesday morning:Advertisement “The Perverts and Lowlifes of the Lincoln Project are back on, where else, Fox News. I thought they ran away to the asylum after their last catastrophic campaign, with charges made against them that were big time sleaze, and me getting many millions more votes in 2020 than I got in 2016. The Paul Ryun run Fox only has high standards for “Trump” ads, but not for anyone else. The Perverts should not be allowed to “false advertise,” and Fox News should not allow it to happen. See you all in Court!!!” Donald Trump threatened to sue Fox News for broadcasting an ad that was critical of him.Truth SocialIt should be noted that Trump notoriously threatens lawsuits but rarely files them ― probably because the discovery process could force him to answer embarrassing questions under oath.That and the First Amendment protections of political speech are probably why Lincoln Project co-founder Rick Wilson didn’t seem too worried about the threat.“In 2020, The Lincoln Project took up a long-term free lease in Trump’s brain. His threat to sue the Lincoln Project today is like Trump himself; impotent, flabby, and pathetic,” he told Mediaite.AdvertisementWilson said he was “delighted” by the chance of a lawsuit and released a Twitter video where he bluntly told Trump to “go for it.”“Go for it. Go for it, bitch. Come at me. I can’t wait,” he taunted. “Do it. Do it. I double dog dare you.”Looks like Twitter users appreciated the ad more than Trump.AdvertisementPerhaps the best attack ad of our generation. The creators like to say they go low so you don’t have to. This is so low, when Trump saw it, the out of control, unindicted slob chose to sue FOX. https://t.co/Jf7ORmMhB8— Charles Adler (@charlesadler) September 8, 2022

Paper tiger. Trump threatens to sue Fox News because they’re running “false” ads from The Lincoln Project about him. Still waiting for Trump to sue the 24 women who accused him of sexual assault.— Mike Sington (@MikeSington) September 8, 2022