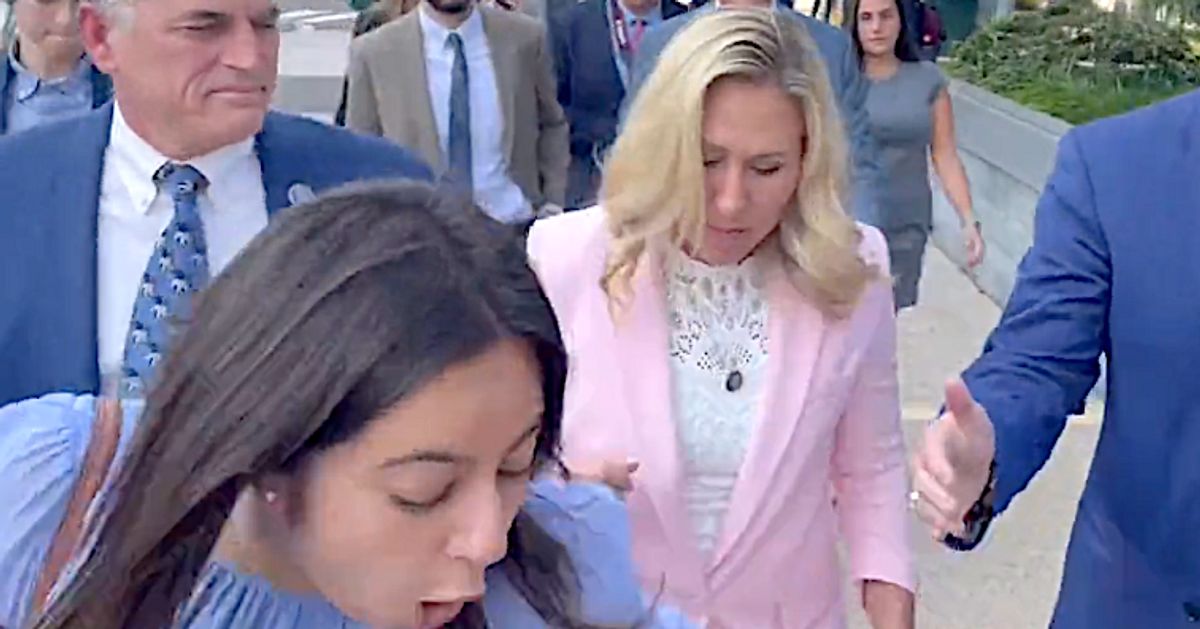 Rep. Marjorie Taylor Greene (R-Ga.) was accused of kicking a teen activist outside the Capitol on Thursday.In a confrontation captured on video that Greene posted on her own Twitter account, the extremist Republican can be seen making physical contact with Marianna Pecora, 18, during a sidewalk argument over gun violence. Advertisement“Oh my God,” says a stunned Pecora, the deputy communications director of the Gen Z group Voters of Tomorrow. She later tweeted: ”@RepMTG just kicked me.” The clash occurred as Pecora and Santiago Mayer, the founder of Voters of Tomorrow, confronted Greene about gun violence following her appearance at a news conference held by members of the right-wing House Freedom Caucus.Greene appears to make a motion with her leg, and Pecora, walking in front of Greene, stumbles forward.Advertisement“You can’t block members of Congress,” Greene’s communications director Nick Dyer told Pecora.He warned Mayer earlier: “Stop approaching members of Congress.”These foolish cowards want the government to take away guns & the rights of parents to defend their children in schools.You have to be an idiot to think gun control will create a utopian society where criminals disarm themselves and obey the law.“Gun-free” zones kill people. pic.twitter.com/1T37HH8jEO— Rep. Marjorie Taylor Greene🇺🇸 (@RepMTG) September 15, 2022

AdvertisementMarge wants to press charges when someone takes one of her sticky notes off the wall in front of her office. Do it!— Dawn (@dafw333) September 16, 2022

Saw the side view video of MTG making a forward kick move & the front view video of your staffer reacting to being kicked…it’s pretty damn clear what occurred.— Marcy Over-educated #Choice #ChristySmithCA27 (@marcywrite …