North Korean ammo will stretch Russia’s supply, but with clear limits and drawbacks 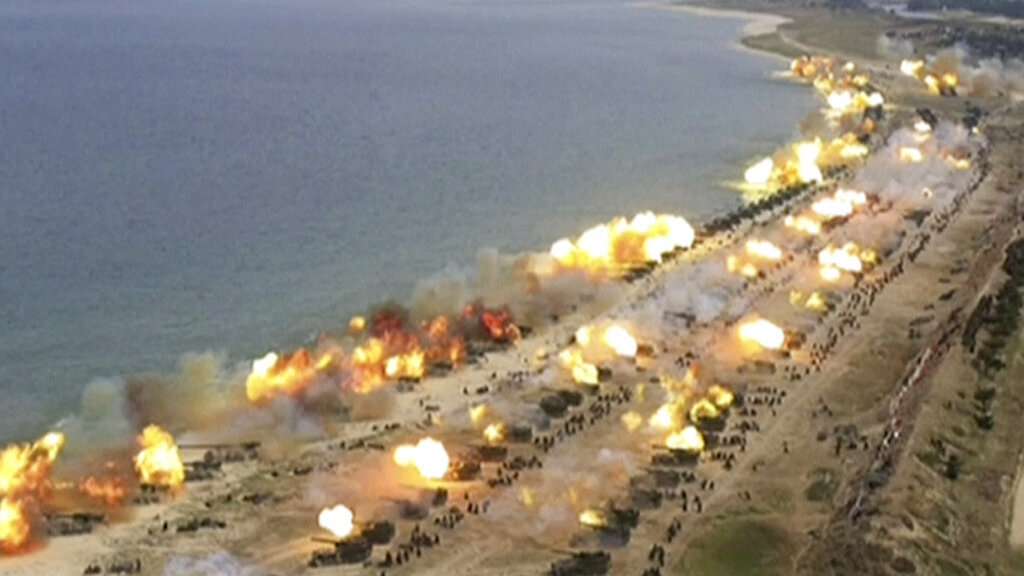 An image made from a 2017 broadcast by North Korea’s KRT shows what was said to be a “Combined Fire Demonstration” in Wonsan, North Korea. North Korea is apparently moving to sell millions of rockets and artillery shells — many of them likely from old stock — to its Cold War ally Russia. Russia has called a U.S. intelligence report on the purchasing plan “fake.”

SEOUL, South Korea — North Korea is apparently moving to sell millions of rockets and artillery shells — many of them likely from its old stock — to its Cold War ally Russia. Russia has called a U.S. intelligence report on the purchasing plan “fake.” But U.S. officials say it shows Russia’s desperation with the war in Ukraine and that Moscow could buy additional military hardware from North Korea. The ammunitions North Korea reportedly intends to sell to Moscow are likely copies of Soviet-era weapons that can fit Russian launchers. But there are still questions over the quality of the supplies and how much they could actually help the Russian military. What exactly will North Korea supply to Russia? Slapped by international sanctions and export controls, Russia in August bought Iranian-made drones that U.S. officials said had technical problems. For Russia, North Korea is likely another good option for its ammunitions supply, because the North keeps a significant stockpile of shells, many of them copies of Soviet-era ones.

North Korea “may represent the single biggest source of compatible legacy artillery ammunition outside of Russia, including domestic production facilities to further supplies,” said Joseph Dempsey, research associate for defense and military analysis at the International Institute for Strategic Studies (IISS). Lee Illwoo, an expert with the Korea Defense Network in South Korea, said both North and South Korea — split along the world’s most heavily fortified border for more than 70 years — keep tens of millions of artillery shells each. North Korea will likely sell older shells that it wants to replace with newer ones for multiple rocket launch systems or sophisticated missiles in its front-line army bases, he said. North Korea’s greater reliance on nuclear weapons and guided missiles may also remove the need for many of its older, unguided artillery shells that once played a prominent role, said Ankit Panda, an expert with the Carnegie Endowment for International Peace. But Bruce Bennett, a senior security expert at the California-based Rand Corporation, said most of the artillery rounds to be sent to Russia are likely to be ammunition for small arms, such as AK-47 rifles or machine guns. “It’s not millions of artillery shells and rockets — that’s more than the likely consumption. It could be millions of small arms rounds,” Bennett said.
How good are North Korean weapons? According to an IISS assessment, North Korea has an estimated 20,000 artillery pieces including multiple rocket launchers in service, a number that Dempsey described as “significantly more than any other country in the world.” North Korea’s state media have called its artillery guns “the first arm of the People’s Army and the most powerful arm in the world” that can reduce enemy position into “a sea of flames.” But its old artillery systems, whose ammunitions will likely be supplied to Russia, have a reputation for poor accuracy. During North Korea’s artillery bombardment of South Korea’s front-line Yeonpyeong Island in 2010 that killed four people, Bennett said that only 80 of the 300-400 weapons North Korea should have fired likely hit their target. In his assessment, Lee said about half of the North Korean shells launched ended up falling into waters before reaching the island. “That is miserable artillery performance. The Russians may experience the same thing, which will not make them very happy,” Bennett said. Observers doubt the usefulness of North Korean ammunition for the Russian campaign in Ukraine, which they say has depleted the military. There have been …