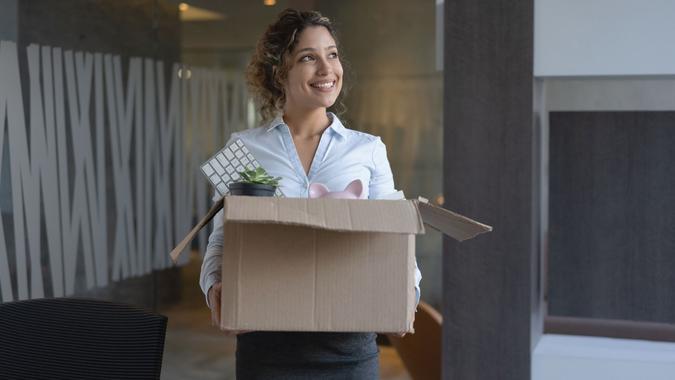 If you’re one of the people swept up in the “wave of layoffs sweeping the U.S.” (as described by Business Insider), there is some good news — it probably won’t be long before you find a new gig.

See: 22 Side Gigs That Can Make You Richer Than a Full-Time JobFind: Surprising Things You Can Buy With Food Stamps

There have been record cuts made at companies over the past few months. Business Insider noted that RE/MAX recently cut 17% of its workforce, Peloton has drastically slashed 4,100 employees and JP Morgan Chase, Wayfair and Vimeo are among other companies handing out thousands of termination notices to workers.

Bonus Offer: Open a new Citi Priority Account by 1/9/23 and earn up to a $2,000 cash bonus after completing required activities.
The tech industry in particular seems to be one of the hardest hit. Crunchbase noted there’s been more than 41,000 jobs cut in tech alone. Much of it has to do with the cost of labor increasing and business growth slowing, as Business Insider affirmed. Further, there’s also the ongoing economic effects of the pandemic and the downfalls of overhiring when things had been looking promising, per Crunchbase.

However, not all hope is lost if you find yourself back on the hiring block. Record job cuts have been met with even more jobs becoming available (just not in certain sectors). That key facet has kept unemployment totals — and a full-blown recession — at bay, per The Wall Street Journal. WSJ suggested in an Aug. 24 report that laid off workers are finding new jobs after a very short turnaround.

The paper noted that eligible candidates are “rapidly landing interviews, multiple job offers and higher pay” than before. WSJ also reported that the ratio is 2:1 regarding the number of jobs available for every one person who is laid off. It’s reported that, in July for example, there were 11.2 million jobs available and 5.67 million people looking for work.

Bonus Offer: Find a Checking Account that Fits Your Lifestyle. $100 Bonus Offer for New Checking Account Customers.
In fact, Fortune indicated that most unemployed people were out of a job for about two months or less over the summer, citing data from the U.S. Bureau of Labor Statistics. The outlet also reported that 37% of unemployed people were only out of work for five weeks or less. Because of the quick transition, few of those affected had to open an unemployment claim.

Due to this phenomenon, WSJ also reported that it’s “the most rewarding time to switch jobs in years.” Workers now have a lot of the control and can play their cards in negotiating and landing a job that has the benefits and pay they are looking for, which means the Great Resignation may not be stopping any time soon.