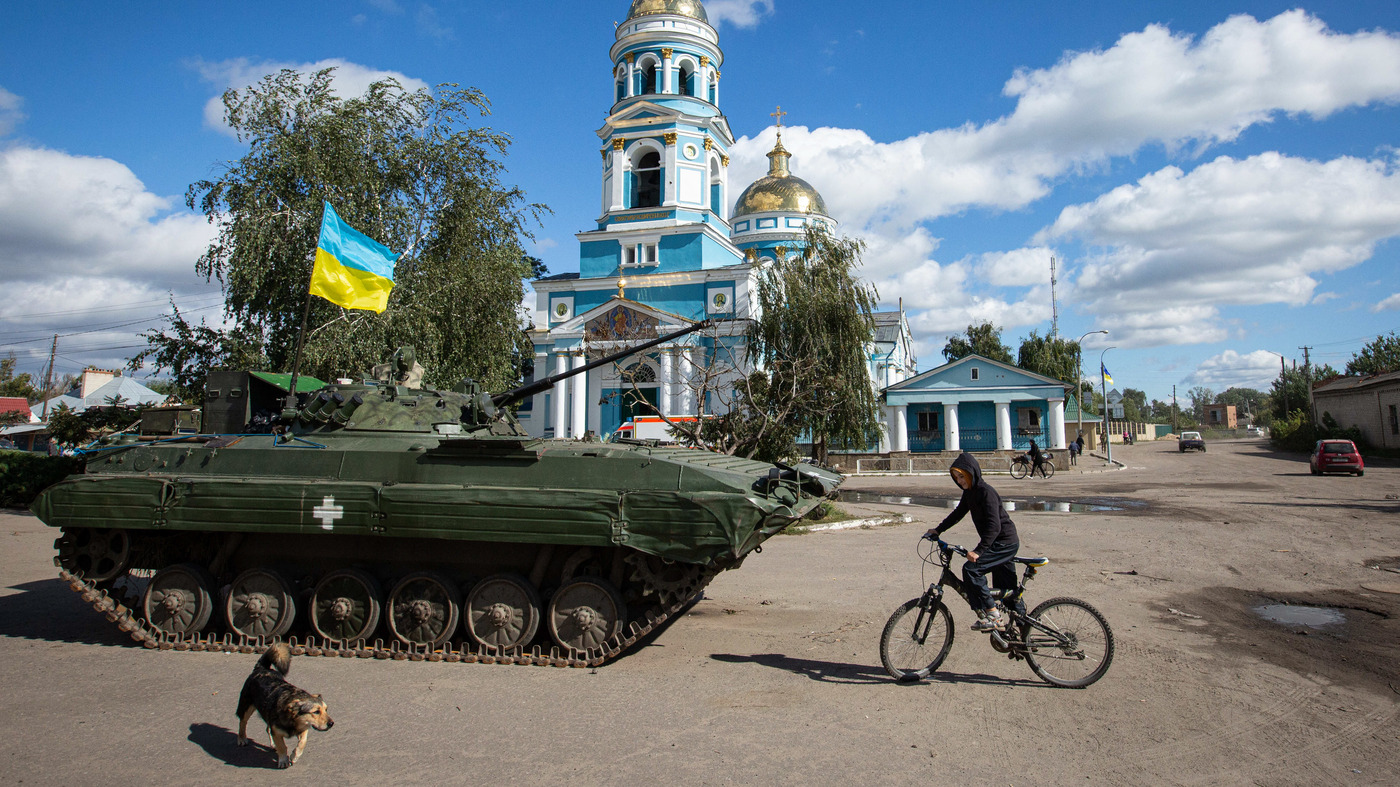 A boy rides a bicycle near an armored tank with a Ukrainian flag in the town of Izium, recently liberated by Ukrainian armed forces, in the Kharkiv region on Monday. Russian troops occupied Izium on April 1.

MOSCOW — Russia today made moves toward annexing parts of Ukraine it controls, as the leaders of the self-proclaimed Luhansk and Donetsk People’s Republics said they would hold a four-day referendum to formally join the Russian Federation, starting as soon as Friday. The announcement of the snap votes was followed by near-identical announcements in the partially Russian-occupied territories of Kherson and Zaporizhzhia in southern Ukraine. “The long-suffering people of the Donbas deserve to be part of a Great Country, that they have always considered their homeland,” wrote Denis Pushillin, the separatist leader of the Donetsk People’s Republic, in a letter to Russian President Vladimir Putin. The choreographed series of events was reminiscent of the Russian leader’s announcement to send tens of thousands of troops into Ukraine in February – following sudden appeals for “security guarantees” from the self-declared east Ukrainian republics. Should the referendums proceed as planned, they would take place against the backdrop of a fast-moving Ukrainian counteroffensive that has seen Russian forces cede large swaths of territory in the Kharkiv region, in what Kremlin insists has been a limited “special military operation” to date.

Yet in a post on social media, Dmitry Medvedev, Russia’s former president and current deputy secretary of the Kremlin’s security council, insisted the votes would give Moscow the right to mobilize additional forces. “Encroachment onto Russian territory is a crime which allows you to use all the forces of self defense,” Medvedev said in a post on Telegram. Observers saw the moves as an attempt to give quasi-legal backing to expand a military campaign that the Kremlin has forbidden Russians to call a war. The move “formally gives Putin the right and, as it were, moral justification, to rechristen the special operation as a war and move towards mobilization and hitting Ukrainian targets, that were previously left untouched, and even abstractly threaten nuclear war,” writes Alexander Baunov, a Russian analyst with the Carnegie Endowment for International Peace. Members of Russia’s parliament, the Duma, passed sweeping legislation Tuesday introducing jail terms of up to 15 years for wartime acts — including surrendering and desertion – among its forces. Russian forces have long been thought to suffer from low morale among its troops. The bill — which needs approval from Russia’s upper chamber before moving on for Putin’s signature — appeared to be an early signal the Kremlin was moving towards a long-rumored mass mobilization of its population.
…