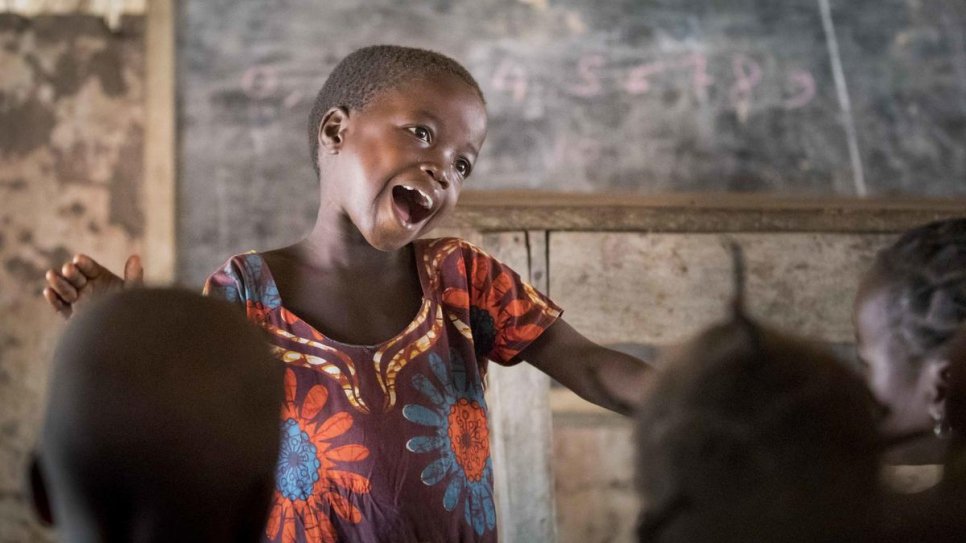 Six-year-old Gambolipai Martha leads the other children in a song during a pre-school class at Makpandu refugee settlement in South Sudan.   © UNHCR/Elizabeth Marie Stuart
NEW YORK – Seven-time Formula 1 world champion Sir Lewis Hamilton is backing calls for all refugee children and youth to be given access to a full quality education, as a new report from UNHCR, the UN Refugee Agency, reveals the urgent need for more international support for refugee students.
In the report, All Inclusive: The Campaign for Refugee Education, data from more than 40 countries shows how refugees lag behind their non-refugee peers when it comes to enrolment in all levels of education.
Average enrolment rates for refugee children in primary schools in the 2020-2021 academic year were broadly stable at 68 per cent. But enrolment drops sharply to 37 percent at secondary level, which refugee learners have historically struggled to access.
There was, however, better news at tertiary level. Although refugee enrolment stands at only 6 percent, this continues an upward trend from a mere 1 percent only a few years ago – giving the UN Refugee Agency grounds for optimism that its tertiary enrolment target of 15 percent by 2030 could be met.
UNHCR’s annual education report is published just as world leaders prepare to debate the future of learning at the Transforming Education Summit at the UN General Assembly on 16-19 September.
Lewis, who campaigns for greater equality, fairness and diversity in education as well as in motorsport, said he was “proud to lend my voice” to the campaign for refugee children and youth to be included in national education systems, and not to be left on the margins.
“Education doesn’t just widen people’s horizons and present them with opportunities they would otherwise never drea …